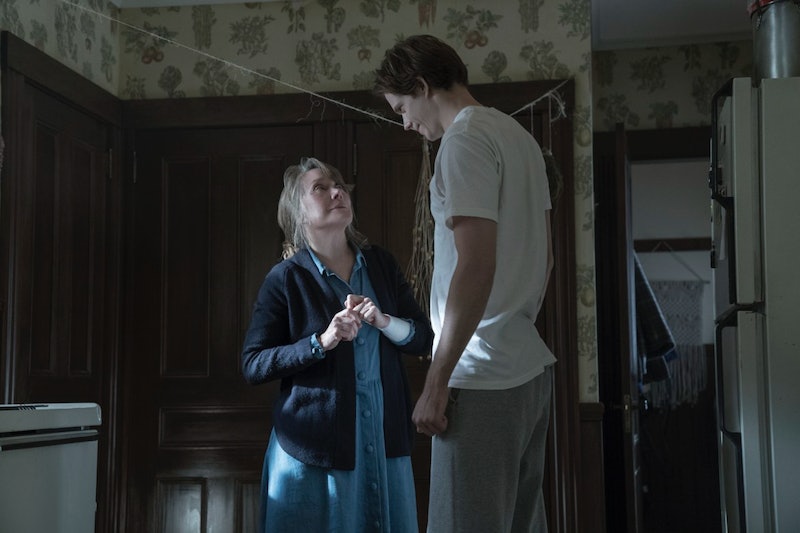 Major spoilers for Castle Rock Episode 9 ahead. Hulu's new Stephen King-inspired series holds its fair share of mysteries. But perhaps the one question that has most intrigued viewers — and inspired by the most fan theories — is the identity of the Shawshank prisoner known only as "the Kid" (Bill Skarsgård). Well, now the truth is out there: The Kid on Castle Rock is Henry Deaver (André Holland) from an alternate reality.

*record scratch* Wait, what? How is that even possible? Well, it's all thanks to a phenomenon known as the Schisma. Yes, that ear-ringing noise that Reverend Deaver took for the voice of God and that Odin Branch explained as the universe trying to rectify the simultaneous existence of multiple possible realities. Well, it turns out that Odin's hypothesis wasn't the random rambling of an insane man, but rather an accurate scientific theory... and just like that, Castle Rock has officially delved from the realm of the supernatural into the realm of science-fiction.

The season's penultimate episode opens with a version of the Kid we've never seen before: well-dressed, confident, articulate, and heading to a business meeting where he pitches the cure for Alzheimer's to a boardroom full of impressed suits. But when he goes home to Castle Rock, Maine, to claim his dead father's house, that's when things start to get weird. It turns out that his father, Reverend Deaver, has recently committed suicide. (His mother, it's also revealed, left Castle rock long ago with her beau, former Sheriff Alan Pangborn.) When he ventures into his dead father's basement, he is surprised to find something that looks eerily familiar to viewers: a young boy locked up in a cage. It's young Henry Deaver — or at least the version of Henry Deaver played in the present by André Holland.

That adopted version of Henry from one reality had been wondering through the woods with his father when he'd finally heard it — the voice of God, the Schisma — and he'd suddenly found himself in this other reality. When he'd knocked on his father's door, the Reverend didn't recognize this Henry, and, thinking he'd been sent by the devil, he locked him up in his basement for years, not to be discovered until he committed suicide (just like Warden Lacy).

When Molly Strand — in this reality, much more popular and outgoing, but still psychic — realizes who the nameless boy from the basement really is (and more importantly, where he comes from), she decides to help him return to his own reality. Chased through the woods by Officer Zalewski (in this reality a cop instead of a prison guard), Molly ends up shot to death, and Henry ends up following his younger counterpart through into our original reality. There, young adopted Henry is discovered by young Pangborn, having only been missing for a matter of days instead of years. And the older, biological Henry wanders around Castle Rock, lost... until he's found and kidnapped by Warden Lacy.

Now viewers know why the Kid's first words after being rescued from the hole were "Henry Deaver": he wasn't asking for a lawyer, he was trying to tell his rescuers his own name. Both versions of Henry Deaver traveled to each other's realities; both were kidnapped by men who thought they were hearing the voice of God; and both were held for years in cages while never aging. The question now is, if they were just boys lost in parallel realities, what do they have to do (if anything) with the evil lurking in Castle Rock? Is the proximity of two different versions of Henry what causes terrible things to happen? And if so, will The Kid ever find his way back to his own reality?