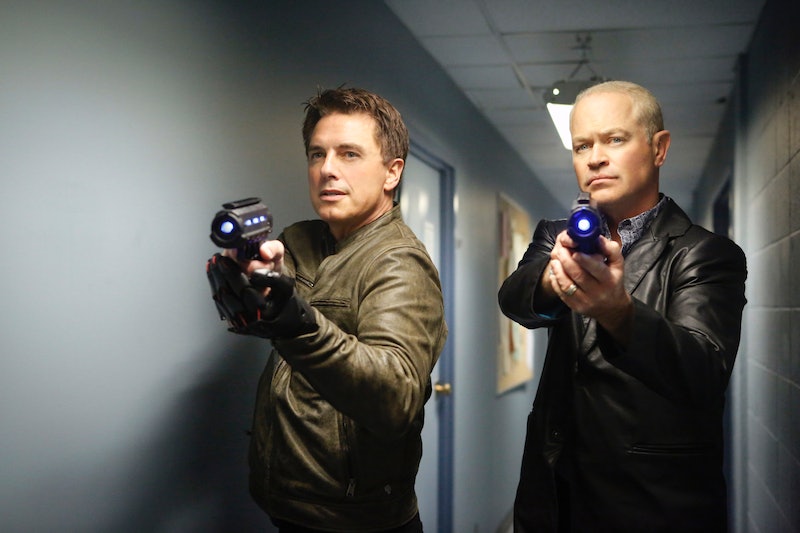 If the CW's superhero line-up has proven anything about comic book villains, it's that they love to make an entrance. In the Dec. 8 winter finale of DC's Legends Of Tomorrow, the Legion Of Doom made theirs. And that was months after showrunners announced their intentions to incorporate the DC bad guy collective into the time travel show at their panel at San Diego Comic-Con, according to The Hollywood Reporter. The heralding of the Legion Of Doom sets up adversarial and in some cases personal conflicts for the rest of the show's second season. Who are the Legion Of Doom, exactly? They've existed in many forms.

For the purposes of Legends, this legion is comprised of characters already entrenched in the Arrowverse. Damien Darhk (Neal McDonough) graduated from running H.I.V.E. on Arrow to chasing the legends through time with fellow Legion member Eobard Thawne (Matt Letscher), the big bad in Season 1 of The Flash. Arrow's Malcolm Merlyn (John Barrowman) is in the mix too; he always has his hands in something that will advance his interests. The fourth member of the Legion is the only one whose evil the team is bound to have trouble accepting: Captain Cold, otherwise known as Leonard Snart (Wentworth Miller) — their former comrade and friend. Now you see what I mean about this fight being personal.

Challenge Of The Superfriends is an animated DC series that had a 16-episode run in the late '70s. It pit the Superfriends (Batman, Wonder Woman, Superman, etc.) against a 13 member deep Legion Of Doom, including antagonists like Lex Luthor, The Riddler, and Gorilla Grodd. The only membership overlap between the Superfriends Legion and the Legends Legion is Captain Cold. Otherwise, the Legends adaptation is more a matter of borrowing a cool name.

Different incarnations of the Legion Of Doom have started drama in various DC media. Their comics appearances include the 2006 miniseries Justice and the Flashpoint books, which is interesting considering how important Flashpoint has been to The Flash this season. They figured prominently into the Justice League Unlimited animated series, premiering in 2004. They've battled DC heroes in the 2012 animated movie Justice League: Doom and were Lego-ized in 2015's Lego DC Comics Super Heroes: Justice League: Attack of the Legion of Doom.

In DC parlance, the Legion Of Doom is a catch-all term for a group of nefarious persons working together to foil some good guys, so Legends Of Tomorrow isn't beholden to any particular version of the villainous society. Darhk, Snart, Merlyn, and Thawne are an original line-up bearing a title that's an homage to their DC roots.