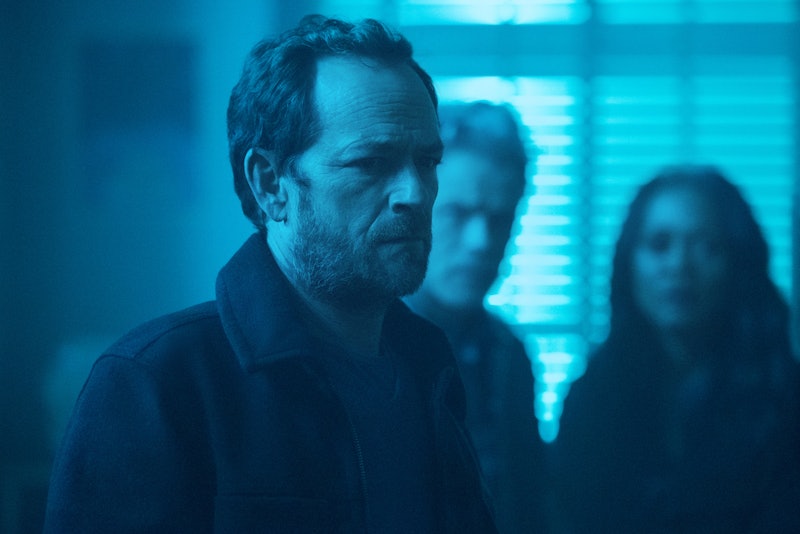 The first episode of Riverdale after Luke Perry's untimely death was never going to be easy, but the CW series honored him in a perfect way that helped to ease the pain. Fans on Twitter were immediately in tears when he finally appeared in the March 6 episode. Then, after all the expected twists and turns were over, Riverdale paid tribute to Perry with a simple, plain message that resonated with fans.

"In Memoriam," read the title card over black. "Luke Perry 1966-2019." It wasn't flashy, but it was respectful and sweet — just like the actor himself. After suffering a massive stroke, Perry passed away on Monday, March 4. Later that day, Riverdale released a statement announcing that production on Season 3 had been suspended to allow the cast and crew time to mourn his loss. In a statement provided to Variety, Riverdale's executive producers Greg Berlanti, Sarah Schechter, Roberto Aguirre-Sacasa, and Jon Goldwater, along with WBTV and The CW, said:

"We are deeply saddened to learn today about the passing of Luke Perry. A beloved member of the Riverdale, Warner Bros. and CW family, Luke was everything you would hope he would be: an incredibly caring, consummate professional with a giant heart, and a true friend to all. A father figure and mentor to the show's young cast, Luke was incredibly generous, and he infused the set with love and kindness. Our thoughts are with Luke's family during this most difficult time.”

However, Riverdale episodes will continue to air as scheduled for the time being. Riverdale showrunner Roberto Aguirre-Sacasa tweeted earlier that Perry, who he says was and is the "heart" of the series "always," would have every episode dedicated to him until the show ends. So this may not be the last time we see this title card. "Tonight’s episode of Riverdale finds Fred doing what he does best--helping Archie," he added.

Here are some of the ways fans reacted to seeing Fred Andrews onscreen following Perry's death. From tears to heartbreak to pride, emotions ran the gamut.

So true, but it's way too soon to be worrying about that. Trust that Riverdale will find a way to give the character the goodbye that Perry deserves — and the farewell Archie deserves, for that matter.

Even the small moment where Archie alluded to Ricky Dees meeting his dad brought out so many feelings.

Brace yourselves, there's still a lot of Riverdale Season 3 left — hopefully full of Good Dad moments between Fred and Archie. It won't get any easier to see him onscreen, and it may break your heart over and over again, but at least it will be a communal experience. The Riverdale fandom, and social media, provides new and old fans alike the space to remember Perry together. When we have to say goodbye to the character after the actor, we'll be fully prepared. It's hard to imagine Riverdale without Luke Perry, but the it's nice to know the show — and the fandom — won't ever forget him.