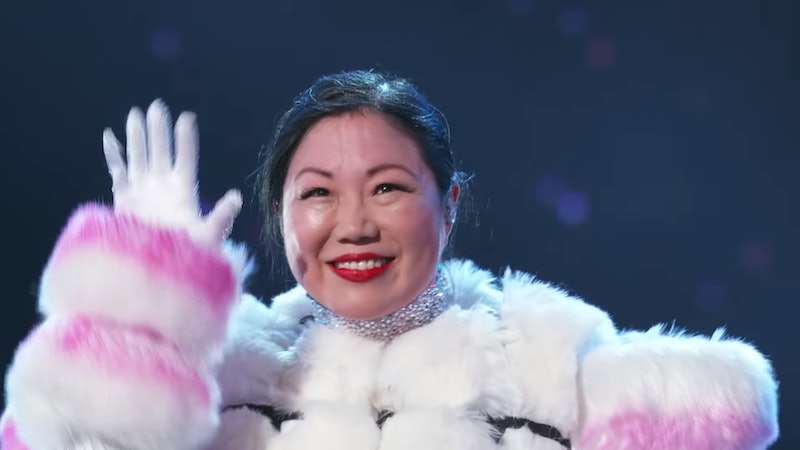 TV's wildest — and maybe most watchable — reality show unmasked another singer on Wednesday night. And it didn't take long for Margaret Cho to share The Masked Singer secrets with E! Online. Don't worry, the comedian didn't drop any spoilers, but that's mostly because she doesn't know any. In fact, Cho, who spent four weeks rocking a robotic poodle costume on the show, revealed that being on The Masked Singer isn't so unlike Netflix's Bird Box — everyone's in the dark and slightly terrified of being seen before their scheduled big reveal. OK, that's not exactly like Sandra Bullock running from a fear monster, but you get the idea.

When E! asked Cho if she had any guesses for the remaining singers, she broke out the Bird Box analogy to explain why even sharing a suspicion feels wrong. "I mean, this is like Bird Box kind of stuff. Don't look, don't, you can't see it, it's your greatest fears!" she explained. "That kind of puts an impression on you where you're just like, I'm too afraid to even guess."

Meanwhile, the internet can't stop trying to guess which celebrities are hiding behind those creative masks. But as one of the singers, Cho knows first hand just how hard it is to try and keep your identity secret until the televised reveal. She even told E! that some of friends became frustrated when she wouldn't confirm that she was the poodle before the fourth episode aired.

"People were just accusing me, too. Like, you're the poodle!" Cho told the outlet. "Like this last week, people were getting really mad now. Like every time I would see friends of mine, they're like, you keep denying it, but you are! You are! And so that was really funny."

Not everyone in Cho's life knew she was the one behind the mask though. One of The Masked Singer judges, Ken Jeong, is an old friend of the comedian's. She even played his sister on the ABC sitcom Dr. Ken, but when it came time to make his guess he went with Melissa Rivers. His reaction to Cho taking off her mask was priceless — he was completely blown away, which is one of the reasons that the reality series is so much fun.

Bird Box is less fun and more terrifying, but that feeling of being in the dark truly does connect these two popular pop culture phenomenons. As Cho said to E!, the whole process is isolating to some degree — even her publicist and manager had to wear masks when they were with her on set to preserve the secret.

It seems that interaction among the contestants is as limited as possible too. "All of our rehearsals were at separate locations where we just had no idea," Cho told E! of the other singers. "You never ran into anybody, I never crossed paths with any of the people. We all had very separate, remote dressing rooms. We had separate production people. We didn't crossover at all."

Luckily for Cho, her Bird Box days are over, and now she can relax and enjoy guessing the rest of the masked singers without the fear of the spoiler monster revealing her poodle disguise to the world.