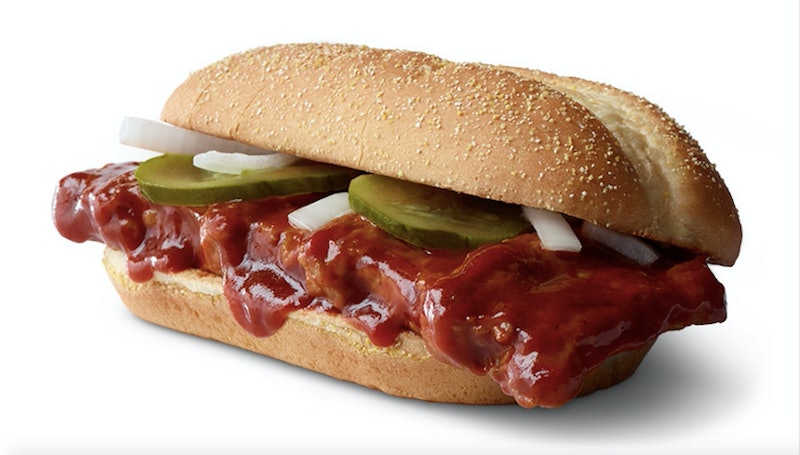 There are a few fast food items that have achieved legendary status. They may be permanent menu items, they may only appear once a year, or their light may have just burned for a short while. I point you to the Shamrock Shake, Burger King Chicken Fries, and, of course, the Mc-freaking-Rib. Well now, the McDonald’s McRib is back in 2019 for a limited time, so you have a chance to get a taste of the glory. Featuring the McRib Pork Patty and all of the fixings, this is a sandwich that fans simply don’t let go of.

“Try a McRib, the tasty fan favorite slathered in tangy barbecue sauce and topped with slivered onions and tart pickles, all on a hoagie style bun,” the website explains. Pickles, onions, hoagie — I’m going to give you a private moment to think about all of that and really let it sink in.

The price will vary depending on your state and location, but Chewboom reports that you can grab the McRib in the two for $6 promotion in some places or for $3.69 on its own. If you want to make a full meal out of that, you can do that too for $5.90 with fries and a drink. And obviously you're going to want fries and a drink, because that's what fast food is all about.

The history of the McRib has been a rollercoaster, because the McRib was first introduced in 1981 but was taken off the menu in 1985 — presumably because the '80s were not worthy. It was then back on the scene from 1989 to 2005, but since 2006 it has only popped up for limited time offers, usually in and around October. Will it ever return as a permanent menu item? Fans have hoped and dreamed of it, but for now we just must count our blessings with those moments when it does finally appear.

And in case you weren’t clear just how excited people are for the return of the McRib, Twitter is exploding with joy at the news of its return. In fact, the love is so strong that there is a McRib locator website, dedicated solely to sightings of the McRib and making it easier to find one near you.

If McRibs aren’t your thing, then don’t worry — because McDonald’s is giving us plenty to work with and thrive on at the moment. McCafé's new Cinnamon Cookie Latte has arrived for the holiday season for a total eruption of sweet cozy flavors — just as we’re still reeling from the arrival of the Mint Oreo McFlurry straight from the heavens. Not only that, you can hack the breakfast menu to make yourself the perfect kick-start for your day, however you want it — McBrunch McBurger, anyone?

There’s no doubt that McDonald’s delivers some of the biggest and best fast food flavors around, but even in a sea of champions, its McRib manages to set itself apart. It’s a sandwich that fans wait for, that they search for, that they have a goshdarn locator for. And now it has returned — praise be to Ronald McDonald in all of his wisdom. Today is a day of days.