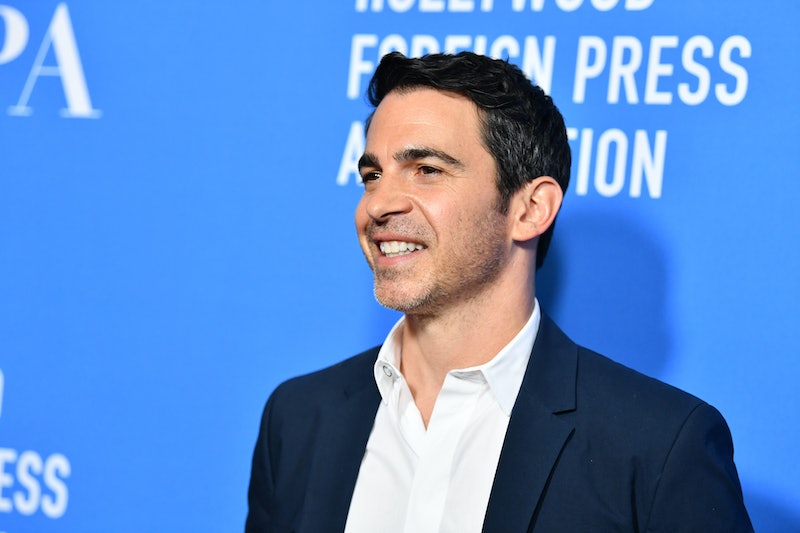 If you're a fan of The Mindy Project, you're probably very familiar with Chris Messina. The actor portrayed Mindy Kaling's love interest and father of her character's child on the show, and was known for his dark and broody vibe. Now, though, Chris Messina's bleach blond hair on the Golden Globes red carpet is making this Sharp Objects star look completely different and taking him far away from his Mindy Project role.

While starring on The Mindy Project, Messina played Danny Castellano, a smart talking, sometimes antagonistic but also lovable doctor with Italian roots. Messina and Kaling comprised perhaps the series' most popular ship when their characters finally kissed on a trip back to New York. Ultimately, Mindy and Danny had baby Leo, and while there was a period where the pair were not together and Messina was no longer a series regular, come the end of the Fox turned Hulu series, the pair reunited in a kiss that could revival their first.

Fans of Messina's character Danny, though, may no longer recognize the actor. On the Golden Globes red carpet, which took place on Jan. 6, the actor debuted bleach blond hair, and to say it was shocking would be an understatement. In fact, it's almost difficult to recognize the actor. The power of hair, right?

Messina walked the red carpet with his new platinum hair, thanks to his work in HBO's Sharp Objects. The show was nominated tonight for Best Television Limited Series or Motion Picture Made for Television, but it's not the only honor. Messina's cast mates Amy Adams and Patricia Clarkson were also both nominated for Best Performance by an Actress and Best Performance by an Actress in a Supporting Role respectively, and Clarkson took home her prize. While that's incredible, it's hard not to talk about Messina's hair.

To say it's a different look would be a bit of an oversimplification, and the internet seems to be all about the massive change.

Who says women get to have all the hair change fun, right?

Now that Messina is blond, there seems to be a petition well on its way to add him to the list of Hollywood stars named Chris and place him alongside the likes of Chris Hemsworth, Chris Evans, and Chris Pine.

Others had jokes about blond Chris Messina hot-ception.

Of course, it's unlikely that Messina dyed his hair just for kicks and giggles. According to Good Morning America producer Tony Morrison's Twitter, Messina's platinum locks could be a result of his role in the upcoming DC film Birds of Prey (And the Fantabulous Emancipation of One Harley Quinn) where he's set to play villain Victor Zsasz. Apparently, the world is about to have a crush on a super villain, but if it's blond Chris Messina, who can blame them?

If you were in love with dark-haired Chris Messina on Sharp Objects or The Mindy Project, don't worry, you'll still love him with his platinum blond hair. Honestly, it probably won't last for ever, so soak in all of the blond Chris Messina that you can.