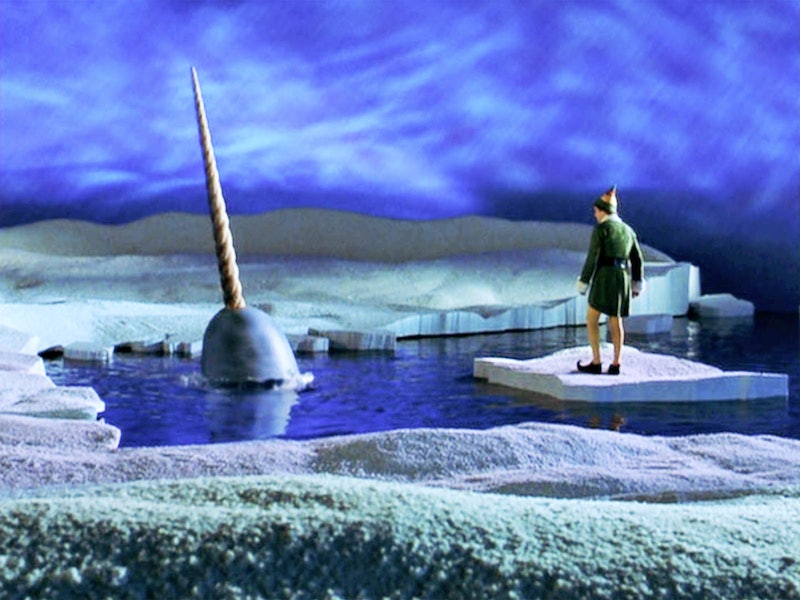 Where were you when the earth stood still, and someone had to tell you that narwhals are not, in fact, imaginary? The famous horned creature has come to knock the mythical ones off their pedestals with the advent of the Narwhal "Frappuccino" at Starbucks, yet another variation of biological beings-based frapps that have since taken the world by storm. Invented by the Modern Barista, while technically not a frappuccino — and more than technically not on the Starbucks official menu — with a little magic, some explaining to a barista, and perhaps some help from your beloved neighborhood overly-tall elf, you can make these oceanic dreams a reality.

Essentially, the Narwhal drink that has been making the rounds on the internet with people asking for blended strawberry lemonade, vanilla bean powder, and whipped cream, according to popular Starbucks blog Starbucks Melody. It's important to not that blended strawberry lemonade also it's an official menu item at Starbucks, and can be ordered by asking for lemonade with strawberry flavoring blended with ice. The effect, while technically not a frappuccino in the regular sense, still gives off frapp-y vibes in that it is still a blended drink — and still, like its recent predecessors, named after a creature far cooler than human beings. Here's what the end result looks like:

Jocelyn Freeman, aka the Modern Barista, is also the inventor of the Mermaid Frappuccino, yet another darling of the caffeinated internet this week that is essentially a toasted coconut matcha variation of Starbucks' Pokemon Go Frappuccino. The popularity of the Mermaid Frapp came on the tails of the Dragon Frappuccino, a green tea and berry drink inspired by — you guessed it, folks — the ever-so-popular Unicorn Frappuccino that lasted for four days in April, and an even shorter time for stores whose supplies ran out too fast to accommodate customer demand.

While the Unicorn Frapp has inspired many #blessed variations from Starbucks baristas (both professional and aspiring), the good news is that some variations in the future will be a lot easier to order — Starbucks has teased at a lineup of more novelty drinks in this same vein, which means we may be drinking the lifeblood of various mythical creatures for several years to come. In the meantime, bear in mind that Starbucks Frapp Happy Hour starts on May 5 — half off frappuccinos from 3 p.m. to 6 p.m. until May 14! A deal even dreamier than unicorns themselves.

More like this
An Expert Weighs In On The Viral Raw Carrot Salad Trend
By Alexis Morillo
15 Black-Owned Liquor & Wine Brands To Add To Your Bar Cart
By Alexis Morillo
12 Aphrodisiac Desserts To Spice Up Your Valentine’s Day
By Kaitlyn Wylde
Dolly Parton Released 4 New Baking Mixes With Duncan Hines
By Alexis Morillo
Get Even More From Bustle — Sign Up For The Newsletter
From hair trends to relationship advice, our daily newsletter has everything you need to sound like a person who’s on TikTok, even if you aren’t.