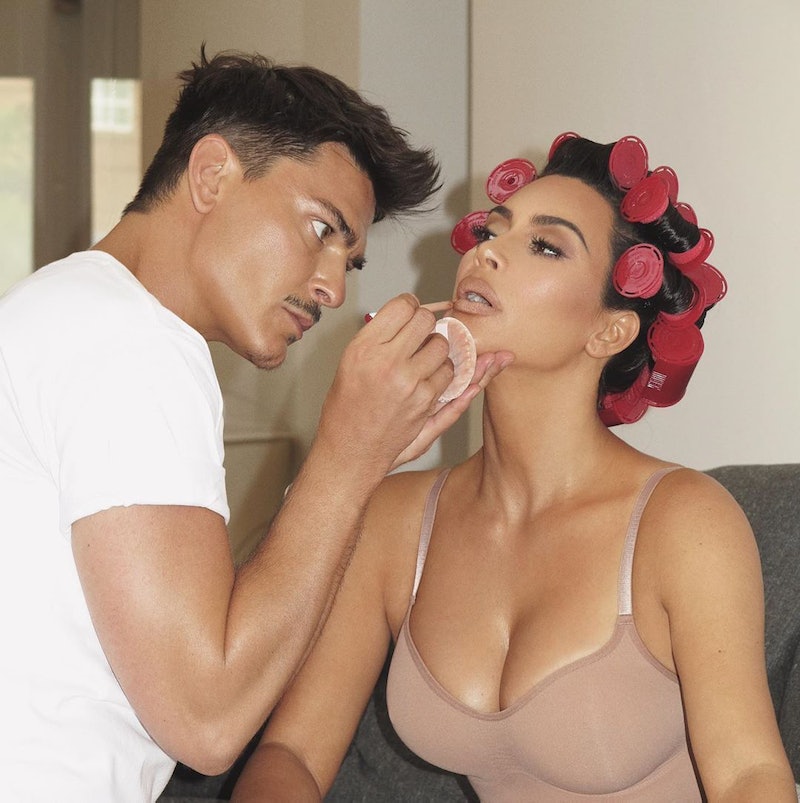 Kim Kardashian West and Mario Dedivanovic are one of beauty's biggest duos. The reality television star and brand owner and her longtime makeup artist have been working together for 12 years, and they're bringing their magic to the masses. The new KKW Beauty x Mario palette is the second collaboration between the artist and the star, and fans may be surprised at just how different it is than their original work together.

On Nov. 14, KKW Beauty gave fans the first look at the second iteration of the KKW x Mario palette. In a photo posted to the brand's Instagram account, the 10 shades of the new eyeshadow collection are seen swatched on four different skin tones to showcase its versatility. The colors are certainly a departure from their predominantly neutral first palette.

The latest KKW x Mario eyeshadows feature a more dominant selection of warm tones including a metallic burgundy red, shimmering copper, and rich, matte chocolate brown. There are also other surprises like a sparkling gunmetal and a pop of matte golden orange. The shades look like the baby of KKW's Sooo Fire and the original Mario palette.

According the the brand's Instagram account, the new collection, entitled The Artist & Muse is set to launch just before Thanksgiving on Nov. 22, and while a palette is clearly included, there's also lipsticks on the way.

Prior to showcasing the colors inside the eyeshadow palette, Kardashian West and Dedivanovic gave fans a look at the first lipstick from their new The Artist & Muse Collection. In a KKW Beauty IG post, Kardashian West is quoted saying, "He uses his hand as a palette to customize my perfect shade of pencil, lipstick and gloss - he’s a mixer." The new lipstick shade? It's a peach based nude called He's A Mixer.

Dedivanovic also gave fans a sneak into his creative process seemingly writing the the palette reveal's caption himself. The artist said, "I kept changing [the palette] — adding and removing shades & textures, testing them on her and on different skin tones, seeing if they all blended together and if they melted into one another on the eyes. It had to work beautifully as a story, and it had to be perfect for both of us....This is pretty much the palette I would take on a deserted island with Kim, confidently knowing that I could do lots of different looks from day to night and I could mix and blend several shades to adjust the warmth and depth."

Fans have known about the new collaboration for some time now, but the exact details were unknown. In October, Dedivanovic posted a teaser video giving fans a behind the scenes look at the creation of the collection as well as the photoshoot for the campaign.

Now, KKW Beauty fans know what's coming from Kardashian West and Dedivanovic, and it could just be better than their first collab.