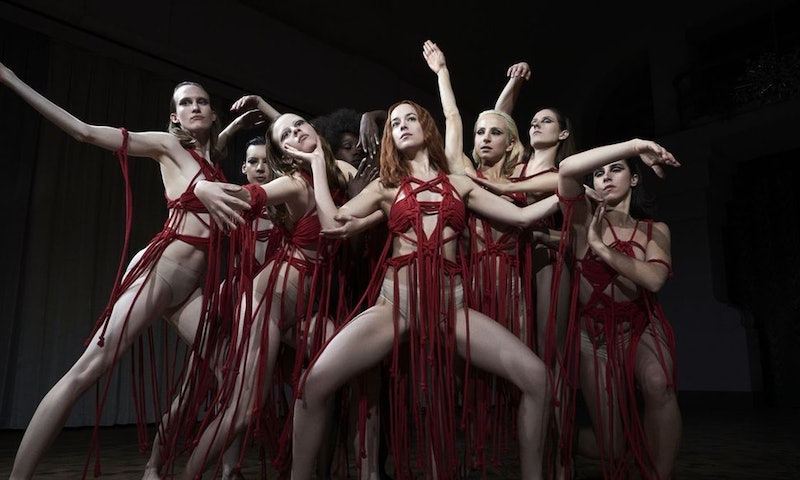 At first glance, Suspiria may seem like an odd movie to remake. The 1977 Italian film by Dario Argento is a cult favorite arthouse horror movie — in other words, it's not the usual target for a Hollywood reboot. Yet that's exactly what the film got with the new Suspiria remake of 2018. It's a divisive arthouse horror film that's both vastly different and strikingly similar to its predecessor, but how exactly does the new Suspiria compare to the original?

The first major difference between the films you're likely to notice is their use of color. Argento's film is widely remembered for its bright and brilliant hues. Lots of neon red and blue lighting permeates the film, giving it a look that's unlike any other film. The new movie, for the most part, goes in the opposite direction. For his setting of 1970s Berlin, director Luca Guadagnino instead chose drab and muted browns and grays to anchor his film, inserting deep red only when the situation calls for it. So visually, the two movies almost couldn't be any more different. But it's in the plots of the two films where their similarities start to arise — until, that is, they don't.

On the surface, both films appear to follow the same storyline. They each take place at a dance academy in Germany. They both feature a young American dancer named Susie (or Suzy in the original) Bannion who arrives at said academy and begins to notice something is amiss. They both feature an evil academy director named Madame Blanc, along with other young dancers named Sara, Patricia, and Olga. And most notably, the dance academies in both films are in reality just covers for witches covens. But that's basically where the similarities stop.

Without getting into spoilers, the new film takes the bones of the original story and takes it in new and unexpected directions. There are some major twists that aren't present in the original film, as well as some new main characters. The most significant of these characters is an elderly psychotherapist named Dr. Jozef Klemperer. Klemperer is played by Lutz Ebersdorf — actually Tilda Swinton deep undercover — and he is one of the movie's main characters; investigating the academy/coven throughout the film and getting ever so close to learning the truth about it. He also goes through an emotional journey in the film that's not present at all in the original film since he's a new character.

Finally, since the new film is 40 years newer than its predecessor, you can expect a more modern feel; particularly in the new movie's strong feminist themes. Virtually everyone in the new version is played by a woman, including the main male character, which gives the movie a distinct female viewpoint that even the original lacked.

The two versions of Suspiria are at the same time similar and different, meaning there's definitely room enough for both of these unique and stylish "witch dance coven" movies in most horror fans' libraries.