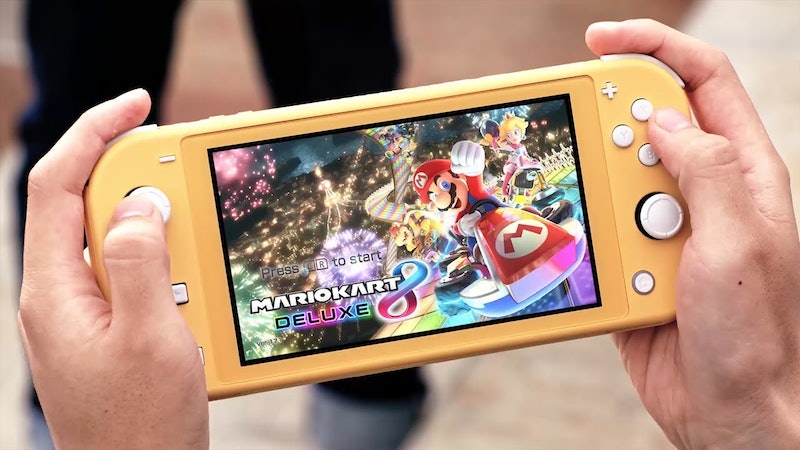 The Nintendo Switch has proved to be a game-changer in the world of home gaming consoles in the two years since its release — and now, there’s a new kid on the block who’s about to shake things up even more: The Nintendo Switch Lite is on the way, bringing a more affordable — if slightly scaled-down — version of the Switch experience to gamers across the globe. Available in three colors — grey, yellow, and turquoise — and priced at $199.99 (compared to the Switch’s price tag of $299.99), the Lite will be launching on Sept. 20, 2019.

Rumors that Nintendo was working on a smaller version of the Switch that would be both less expensive and geared towards portable gaming have been circulating for some time. Japanese news outlet Nikkei reported something to that effect back in January of 2019, and although much remained either hazy or unknown about the report at the time, it didn’t seem out of the question that Nintendo might have something like that in the works. After all, the company has put quite a bit of emphasis in recent years on developing smaller, more affordable consoles, ranging from miniature versions of nostalgia-inducing systems like the Nintendo Classic to altered versions of contemporary consoles like the Nintendo 2DS. And on Wednesday, the announcement finally came, courtesy of a video starring Nintendo Switch General Producer Yoshiaki Koizumi: The Switch Lite will be arriving this fall, expanding both the Nintendo Switch family and the company’s handheld-focused offerings at the same time.

Whereas the full Switch is notable for its ability to function as both a home console — the kind of machine you plug into a television or other monitor to play — and a handheld console meant to be taken on the go, the Switch Lite does away with the home console function. Or, as the video announcement puts it, the machine is “dedicated to handheld play.” As such, a number of features native to the Switch have been either altered or removed from the Lite.

There’s no IR motion camera or any HD rumble features, for example — which, as The Verge’s Andrew Webster notes, “creates some small compatibility issues.” Elaborates Webster, “If you want to use motion controls to catch monsters in Pokemon Let’s Go, or play a game like 1-2 Switch that requires them, you’ll need to purchase an additional pair of Joy-Con separately.” The Joy-Cons can connect to the Lite wirelessly, though, so at least there’s that.

Speaking of controllers, the Switch Lite’s don’t detach like the Switch’s Joy-Cons do; the machine is all one unit. This means that, in addition to the lack of TV mode, the Lite also doesn’t have a tabletop mode. The good news, though, is that all Switch games that support handheld mode are playable on the Lite, including major releases such as Smash Brothers Ultimate, Mario Odyssey, The Legend Of Zelda: Breath of the Wild, and Mario Kart 8: Deluxe. The packaging for each Switch game tells you whether it’s handheld-compatible; just look for this graphic:

The symbol on the far right indicates that the game supports handheld mode.

It’s not immediately clear whether games that don’t support handheld mode will be playable on the Lite in some way; although Nintendo reportedly told The Verge that you’ll be presented with a warning if you try to purchase a game from the Nintendo eShop that isn’t compatible with the Lite, the Nintendo website does also state, "For games that do not support handheld mode, players can wirelessly connect compatible controllers (sold separately) to Nintendo Switch Lite” — these “compatible controllers” being the Switch’s Joy-Cons. This seems to imply that you might be able to play games that don’t have a handheld mode on the Lite as long as you have a pair of Joy-Cons to go with it… but you’ll probably want to double-check that before you try it. There’s nothing sadder than buying a game you can’t actually play.

The good news, though, is that you can still play multi-player games with the Switch Lite, even though it doesn’t support TV or tabletop mode or come with detachable controllers: To do so, you can either wirelessly link up to eight Switches or Switch Lites to play multi-player games locally, or, if you have a Nintendo Switch Online membership, you can play with other players online from anywhere in the world (for games that include online compatibility, at least).

But while the Lite may have fewer gameplay capabilities than the full Switch, it trades those features for portability. It’s a lot smaller, for one thing: While the full Switch is 4 inches high, 9.4 inches long, a little more than half an inch deep, and about .88 pounds when the Joy-Cons are attached to it, the Switch Lite is only 3.6 inches high, 8.2 inches long, and .61 pounds. (It maintains the same depth of the Switch, measuring .55 inches deep). Its touch screen is also a bit smaller; while the Switch’s screen measures 6.2 inches, the Lite’s screen measures only 5.5.

The Lite does, however, have a slightly longer battery life than the Switch, lasting an estimated three to seven hours on a single charge to the Switch’s two and a half to six and a half hours. That’s admittedly not a huge difference — but according to Nintendo’s website, the Lite is capable of playing Breath of the Wild for about four hours before the battery runs out, while the regular Switch can handle the same game for about three hours.

In many ways, the Switch Lite is to the Switch as the Nintendo 2DS is to the Nintendo 3DS: It’s a lower-cost option that eliminates some of the fancier functions of a pricier console while still maintaining compatibility with the more expensive version’s most popular games — thereby making the gameplay experience more accessible as a whole. I might argue that the 2DS makes a little more sense than the Switch Lite does; the 3D gimmick, while cool, isn’t really a core part of the gameplay of most 3DS games, which can typically be easily enjoyed in just two dimensions — but the versatility of the Switch is one of the console’s main selling points. As such, doing away with it seems a little… odd.

Then again, the library of games developed for the Switch might still be enough of a draw for the Lite to be appealing, especially for people who tend more towards handheld gaming that home console gaming in the first place. While the Wii and Wii-U both struggled to find an audience, largely due to an underwhelming game selection, the Switch has seen a quite a few notable releases in its so-far two years of life — with more on the way: Both new Animal Crossing and Luigi’s Mansion games are set to arrive soon, bringing these two beloved franchises into the Switch family’s fold. If Nintendo continues apace, the Switch will no doubt continue to hold the record of being one of both the fastest and best-selling video game consoles of all time.

The Nintendo Switch Lite is due out on Sept. 20, 2019. For more — including a detailed comparison between the Lite and the full Switch — head on over to Nintendo’s website.