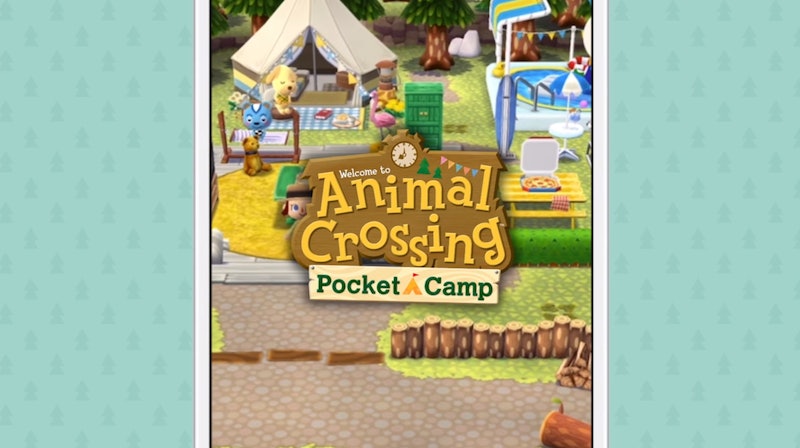 Like many, I’ve been in a constant state of high alert since the 2016 presidential election. My nerves are always frazzled, and I’m continually bracing myself for the next horrific thing to come out of the White House, or Congress, or any other part of our government — and it is exhausting. Indeed, living in the Time of Trump continually underlines how important it is not only to resist (god knows it’s important to resist), but also to take care of yourself while doing so — and when it comes to self-care, Animal Crossing: Pocket Camp has turned out to be an unexpectedly valuable tool for me.

Yes, the Nintendo app. The one full of anthropomorphic animals who spend their days lounging around spaces you set up for them and asking you to fetch them random items. That one. Weird? Maybe. But in the week or so since its global release, Pocket Camp has come to perform an important function in my everyday life: It helps keep me from getting too anxious about everything.

I didn’t actually grow up playing the Animal Crossing series. The first installment, which came out in 2001 in North America, was released on a system I didn’t have (the GameCube), a trend which continued for the next several releases. However, Animal Crossing: New Leaf arrived in June of 2013 — just before I relocated from New York to southern New Jersey to move in with my now-husband — and this time, I had access: He already owned a 3DS and had bought the game almost immediately following its release.

I should note here that I am a very bad worrier. I worry about everything, and I get anxious when I don’t know exactly what to expect. I was, therefore, both worried and anxious about moving from the city in which I had spent my entire adult life — a full decade, at that point — to a small town in New Jersey. Neither my partner nor I intended to stay there for the rest of our lives; however, when I originally moved to New York at the age of 18, I hadn’t anticipated ever leaving — and although, by the time I was 28, I had changed my mind and definitely felt like it was time to go, this meant it was a pretty big adjustment nonetheless. Add to that the fact that my job at the time was somewhat volatile, and well… I certainly don’t regret making this change — many good things have come from it — but there was a lot about the situation that I found difficult to deal with, primarily because it involved so much uncertainty.

One of the things that helped was Animal Crossing: New Leaf. My husband and I are both gamers, although he’s a lot more hardcore about it than I am. This is definitely not something with which I have a problem; indeed, it means that a lot of the time, he makes really great recommendations for games he thinks I’ll like. New Leaf was one of those suggestions. As a longtime fan of the series, he knew its trappings well and thought the new version might appeal to me. So together, we set up a town we called “Trousers” (because what else is a game about a town populated by anthropomorphic animals for but the chance to be as ridiculous as you like?) — and just as we were settling into a home that had previously been his home and was now our home, we also settled into a sort of virtual home full of cute little houses and colorful neighbors.

We built Trousers from the ground up, adding amenities, welcoming new neighbors, celebrating nebulous seasonal holidays, and opening up new places to explore. And although we eventually stopped playing — not on purpose; just because there came a point where we ran out of things to do and slowly ceased logging in — it remains a game to which I have attached a lot of good memories and positive feelings.

Similarly, Pocket Camp arrived at a time of great upheaval — although this time, it’s upheaval on the national scale. My worries are much bigger now (which I am well aware is a privilege in and of itself), both for the country and — selfishly — for myself: I worry that millions of people will lose their health care, and that my own health care will become unaffordable; I worry that our reproductive rights will be taken away completely, and what that means for both others and myself; I worry about how emboldened white nationalists and white supremacists have become,and how much more emboldened they likely will become, on top of the systemic racism that has been part of the fabric of our nation since its very founding; I worry about the Dreamers and the tax bill and the wall and trans rights and everything else that everyone with a conscience is worried about. And right now, I worry about the potential shutdown of the government that might occur on Dec. 8: I worry about the widescale chaos that might result from it, should it occur, and I worry about the fact that, since my husband is now a government employee, a shutdown also means the loss of a significant portion of our household income for an indeterminant amount of time.

Many of these worries did not suddenly begin with the election of Donald Trump, of course; they’ve always been there. It is a mark of my position as an enormously privileged person that for me, they intensified so greatly on Nov. 8, 2016.

I try to counter the worry with as much action as I am capable of taking — making phone calls, writing emails, sending faxes, going to demonstrations — but I am still scared a lot. I am scared about everything. And because I am a worrier, and because uncertainty makes me anxious, this fear often prompts me imagine a series of worst-case scenarios which continuously snowball together into an abominable snowman of disaster that becomes so large I do not know how to deal with it.

It’s exhausting for all of us — for me; for my husband; heck, probably even for our cats.

And that’s where Pocket Camp comes in.

There isn’t much to the game itself; it consists mostly of running errands for the animals that populate the world and crafting furniture and other items to convince them to visit your campsite. The errands are repetitious — they typically only require that you catch or gather a certain combination or number of bugs, fish, and fruit — and crafting the items requires only the right materials and level of experience. You can level up the larger amenities, thereby unlocking further amenities to craft later on, but again, it’s all pretty much the same thing over and over and over again.

But there is something about the routine involved with playing Pocket Camp that I find enormously soothing. I always know what to expect. I always know where to go to find what Rosie the Cat or Apollo the Eagle have requested. There are some surprises — animals may randomly gift you crafting supplies or money, and the items available for sale in the marketplace change a few times a day — but they are the good kind of surprises; they are treats, not tricks. What’s more, these surprises are all merely variations on a theme — riffs that function within the game’s basic framework. They are familiar, and therefore comforting.

The world of Pocket Camp, too, is comforting. Brightly colored (yet, miraculously, not an eyesore) and full of creatures who want nothing more than to be your friend, it is accepting in a way that our real world often is not. The continuity from previous Animal Crossing games also helps with this feeling: When Tex the Penguin — whom I had previously developed a fondness for while playing New Leaf — became available on my Pocket Camp contacts list, I squealed with joy. It was like meeting up again with an old friend.

Ultimately, PocketCamp is an escape — and a silly one, at that. But for me — for some reason —it works. That silliness takes me out of a world in which I so frequently feel like I have no control and lets me run around a world that is predictable and simple and warm. The only things I have to worry about in Pocket Camp are when the pale chubs are going to respawn in the river and whether I want my avatar to be able to relax in a hammock or a ranch bed. It doesn’t solve the bigger problems with the world — but it helps make the anxiousness I feel about them a little more manageable. And that, as they say, isn’t nothing.

More like this
I'm Going Off My Bipolar Meds to Try to Get Pregnant
By Anonymous, as told to Anna Goldfarb
If Your Refrigerator Is A Mess, These 25 Organizing Products Can Help
By Courtney Young
Here’s What Sarah Jessica Parker’s Canned Cosmo *Actually* Tastes Like
By Emma Garza
What Is “Night Luxe?” Breaking Down TikTok’s New Aesthetic
By Courtney Young
Get Even More From Bustle — Sign Up For The Newsletter