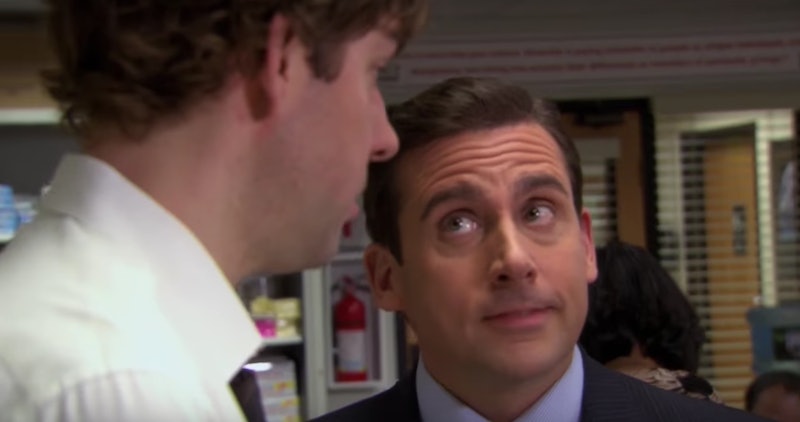 Here's a little morsel of Dunder Mifflin history for you. In a recent interview with IndieWire, Steve Carell shared The Office cast voted on the show’s theme song all those years ago. This detail came up after Carell’s Beautiful Boy co-star Timothée Chalamet told IndieWire that when he marathons The Office, he does "not hit the skip theme song in the beginning, and watch[es] it each time." (Chalamet is, as he’s made abundantly clear during Beautiful Boy’s press tour, a devoted The Office stan.)

“Incidentally, we all voted on the theme song. We had four different versions of the theme song from different artists, and Greg Daniels, the producer, sent us all versions. And as a cast, we voted on what was going to be our theme song. It’s kind of cool.”

Wait. Does that mean there are three more versions of Jay Ferguson’s theme somewhere out there in the ether? Or was this one of four entirely different compositions that were in the running toward becoming America's Next Top The Office Theme? Either way, cast of one of the greatest scripted comedy shows ever sure did pick a winner of a tune.

In his 2015 memoir The Bassoon King, Rainn Wilson recounted the collaborative effort that went into choosing the mockumentary series' theme song. Per Stereogum, Wilson writes,

“There was an interesting process to decide on our theme song. Many songs were being considered seriously, including ‘Better Things’ by the Kinks and ‘Float On’ by Modest Mouse. Greg [Daniels] graciously sent out a list of songs and links to them as well for the cast to weigh in on. The one we all wanted most of all was ‘Mr. Blue Sky’ by Electric Light Orchestra. It’s a sensational song and its jubilant, upbeat refrain would have fit perfectly over the drab video of the opening credits.”

“Mr. Blue Sky” didn’t happen, but it all worked out. Wilson continues,

“The theme we eventually ended up with was a beaut. Composed by former seventies rock/pop star Jay Ferguson, it was fun and catchy with just a hint of melancholy. It perfectly set the tone for the show.”

The Tale of The Office Theme doesn't stop there. Musician Bob Thiele Jr., AKA Joey Scrantone, chronicles the origin story of the Scrantones and the theme song in his personal blog. In a post that went up back in 2009, he writes,

“My friend Greg Daniels, the producer of the American version of The Office, played Jay Ferguson’s demo of what would become the show’s theme for me one afternoon before the series had started. I thought it was fantastic, far better than anything I’d given him from ‘my own pen’ that I had hopes for. We both agreed that while Jay’s demo had a really nice, whimsical quality, the recording could be more fully realized.”

Thiele Jr. explains he reached out to fellow musicians Dillion O’Brian, Brian Macleod, and Hal Cragin, headed to the studio, and recorded the theme “on a Thursday night, one week before the air-date of the premiere episode.”

More like this
Why You Loved 'One Tree Hill' So Much — And Still Do
By Sabienna Bowman and Radhika Menon
Emma Thompson, Lashana Lynch, & Stephen Graham Lead Netflix’s 'Matilda'
By Sophie McEvoy
The 'Hocus Pocus' Sequel Finally Has A Release Date & It Makes Total Sense
By Shannon Barbour and Radhika Menon
Everything To Know About 'My Big Fat Greek Wedding 3'
By Grace Wehniainen
Get Even More From Bustle — Sign Up For The Newsletter