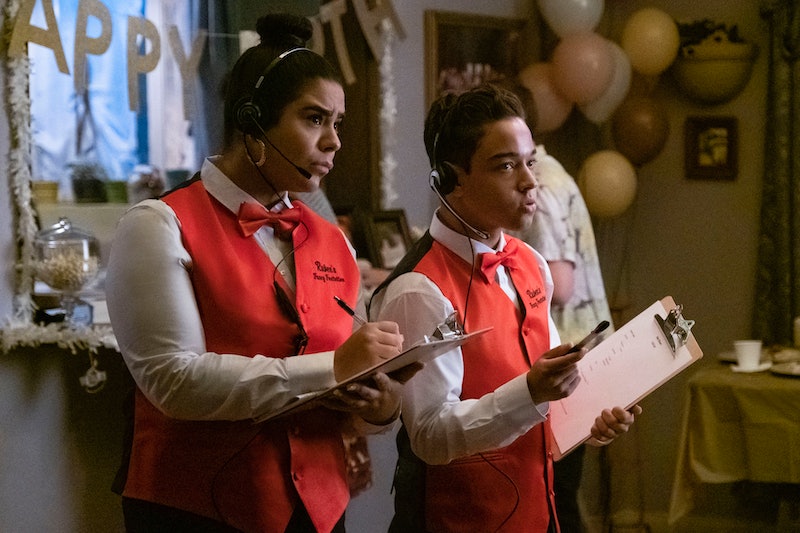 Besides being a great TV series that deftly handles weighty issues, the Netflix show On My Block has killer music. And with characters that love dancing as much as Ruby (Jason Genao) and Jasmine (Jessica Marie Garcia), it's no wonder. Fortunately for fans who have already blown through all ten episodes, fear not: The On My Block Season 2 soundtrack is now streaming on Spotify.

As audiences will recall, Season 1 followed Jamal (Brett Gray) as he searched for the RollerWorld money and Cesar's (Diego Tinoco) attempts to stay out of the Santos gang. Unfortunately, he butted heads with a Prophets member named Latrelle, which made him a target. The first season ended with both Olivia and Ruby getting shot by Latrelle at her quince — bullets that were meant for Cesar. And while Ruby survived, the Season 2 premiere revealed that their friend didn't make it.

Season 2 covers a lot of narrative ground, as the kids have to decide what to do with such a large sum of money (not to mention how to launder it). But not everything is doom and gloom: One such fun Season 2 scene takes place at their school's Valentine's dance in Episode 4, which also features some great songs. Audiences can hear "BOOGIE" by Brockhampton as the scene opens, and during Jasmine and Ruby's iconic dance, the song "Look At That Butt" by Dillon Francis, feat. Jarina De Marco is playing, which is a worthy vehicle for their impressive choreography.

Fortunately for Spotify users, the whole album is streaming on the music platform, where fans can have the playlist on repeat for the next several months. While the Season 1 soundtrack featured Lil Pump, BLESSED, H.E.R., Sampha, and Kelela, among others, this season boasts some serious bangers, as well, including "Ultimate" by Denzel Curry and "Ratatá (Leave No Trace)" by Niña Dioz. The second season also features notable artists like DeJ Loaf, Nao, Khalid, DRAM, and Billie Eilish, whose names music fans likely recognize.

However, there will be plenty of opportunities for new discoveries, too. Since On My Block is set in a heavily Latinx neighborhood, the soundtrack has plenty of Spanish-language music, like Breezewood La Connecta, the Colombian singer Alci Acosta, and Mexican newcomer Niña Dioz, among others.

According to IMDb, the show's music supervisors are Jamie Dooner and Ben Hochstein, and the songwriter Kovas is credited for the series music. Kovas also has credits on films like 22 Jump Street, Ruby Sparks, and Captain Phillips, per his website, and he's also credited with the song "Bottle Rocket" from the Season 1 soundtrack.

With so much great music to choose from, On My Block fans are sure to find their next favorite artist (or two, or three) on the lengthy, Season 2 playlist. The only question that remains now is which song to listen to first, and how many times.