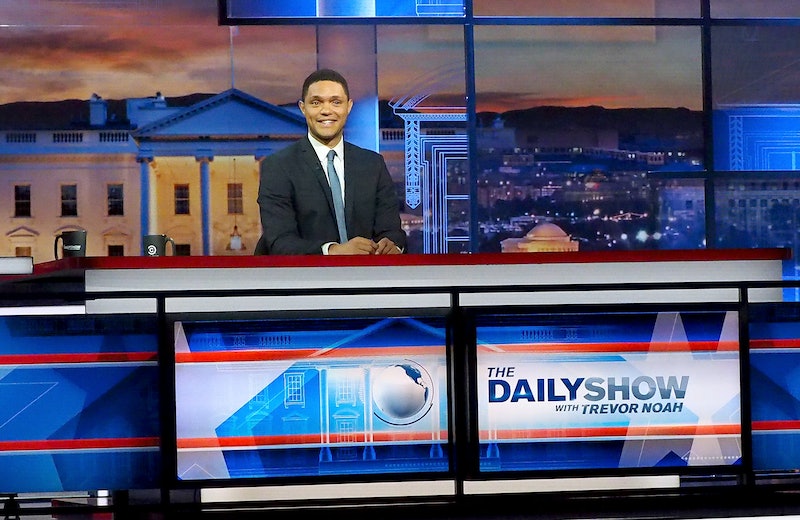 In a world where the reality of politics may seem crazier than anything fictional, the need for truth and transparency from the top down has never been greater. As Jeff Sessions' and James Comey's testimony continues to rock the nation, President Donald Trump has been fairly quiet, but Trevor Noah wants to change that. The host of The Daily Show sat down with Bustle along with two other reporters at Comedy Central's brand new offices in Hollywood to discuss how he's dying to get literally "anyone" from Trump's administration as a guest on his popular late-night talk show. But he's finding that to be an impossible ask these days.

"Everyone's afraid to speak out," Noah says calmly, sitting across the conference room table. "Like for instance, we had Omarosa [scheduled] on the show, she was invited, and then on the day, the administration pulled her from coming. That's where we are now."

Considering the fact that "she's supposed to be minority outreach for the White House," Noah can't imagine any better place for her to talk to the public right now. "But I think we're in a space where politicians have realized they don't need to do that," Noah says. "Republicans are going, 'We don't need to go out and face a challenging interview.' We will still try and get the president on the show but it's going to be hard."

If, against all odds, The Daily Show is successful in not only booking Trump as a guest on the show but actually getting him to show up for the taping, Noah already knows the first thing he would say to the current President of the United States.

"As a joke I would say, 'How much for you to leave?'" he says with a small smile on his face. "Because I think he has a number."

But on a more serious note, Noah reveals, "I would ask him whether or not he truly feels the Republicans are going to help him achieve what he promised he would achieve during the campaign. I think there is a distinct breakdown between what Donald Trump wants and what Republicans want."

While Noah has, in the past, reached across the aisle to have people like Tomi Lahren as guests on The Daily Show, he doesn't agree with the criticisms he's received about how that gives the wrong people a "platform" for their controversial ideas or agendas. He believes that having someone like Trump come on would help expose the contradictions and lies rather than give a platform for it.

"I think so many people use terms that they're not completely familiar with. They'll say platform, but there's a distinction between platform and engaging in ideas," Noah says. "A platform is providing somebody with a space to say something unopposed. Tackling an issue head on is not a platform. A debate is not a platform. By that logic, then playing clips of Fox News is giving Fox News a platform. That's not what we're doing."

Even as the conversation starts getting more and more passionate, Noah impressively remains calm and collected, only slightly adjusting his tie or shifting in his chair.

"If you are in a political space, you should be willing to engage with an opposing idea because you believe that yours is in fact correct," Noah continues. "If your idea doesn't stand up to challenge, then was it the idea you should have been backing? I don’t think so. It's easier to shout it out when you're talking to your friends, but when you say it in a hostile environment, does it stand up? That's the big difference for me. To say, 'Don't give them a platform,' means I would never have a Republican on the show, I would never have Donald Trump on the show, I would never have any politician or pundit that I don't agree with on the show and that for me is not good TV. It's not good for society." "

As the state of politics continues to get more and more unsettling as the news cycle shortens to 12 hours instead of 24 (and sometimes even less than that), Noah doesn't believe The Daily Show has the responsibility to give viewers the news but rather their take on the news. He stands by the fact that as long as he and the other Daily Show correspondents give viewers enough information to understand their jokes and the stakes of what they're discussing, "then we're in a good space of the show." But ever since Trump's campaign began, even before he was elected president, Noah felt his sense of purpose changing in regards to The Daily Show viewers.

"I distinctly felt like I was now in gear, period," he says. "I now knew I had a purpose and an intention. And that is why I felt I was immediately in a place and a space that felt right. I know what it's like to live in a country where the person who shouldn't have won wins. I've lived in a country where the person in power is driven by a group of voters who feel like they were left behind [and] are not particularly well-educated, and they are angry at the system that has left them behind. I know what that's like."

As for what fascinates Noah the most about the Trump administration and its effect on the nation, he pauses to think before answering.

"What has astonished me most is how Donald Trump has shown the deep down ability of people to not care," Noah says. "I think he has exposed how much people actually did not believe in what they were saying or what they were doing. It's a magical thing to see. He's dropped the façade."

Noah is "amazed at" how Trump has "gotten people comfortable with being their deepest, darkest selves."

"People [are] just running through the streets with torches and Klan hoods now, and now they don't even wear the hoods," Noah says. "At least back in the day, the Klan was like, 'I'm going to wear a hood, I don't want you to see my face.' And now [Richard] Spencer and his buddies are out in the streets straight up looking you in the eye, going, 'Yeah, this is who I am, this is what I stand for.' So that's probably the more shocking thing, how brazen people who were once embarrassed have become."

If only they were brazen enough to come on The Daily Show to answer a few simple questions.