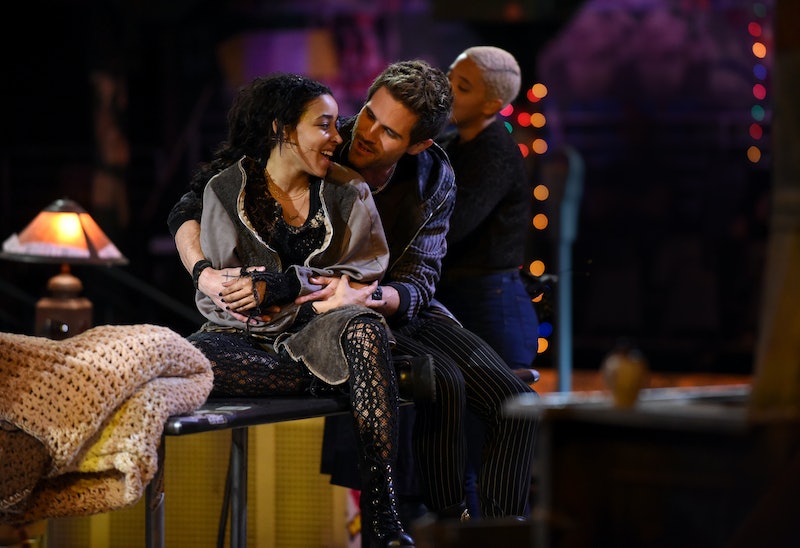 Rent has been performed for more than two decades by so many performers, but the original cast will always hold a special place in people's hearts. So the most exciting part of Fox's production was when the original cast performed in the Rent Live finale. The majority of the original Broadway cast had performed in the 2005 movie adaptation and while they were officially too old to reprise their roles for Rent Live, Taye Diggs, Wilson Jermaine Heredia, Jesse L. Martin, Idina Menzel, Adam Pascal, Anthony Rapp, Daphne Rubin-Vega, and Fredi Walker-Browne all returned for a rendition of "Seasons of Love." And it was the perfect way to pay tribute to Jonathan Larson and his beloved musical.

Rent Live was a pretty messy spectacle. Not only were there changes made that enraged fans, but some of the performances were a little lackluster. And it certainly didn't help that Roger performer Brennin Hunt broke his foot the day before, so the majority of scenes featuring him were pre-recorded from the final dress rehearsal. But none of that mattered when the original Broadway cast took the stage at the very end. Everyone in the cast and audience was already feeling good due to the uplifting "Finale B," but the OG cast brought the energy level up another notch.

As Rent Live acknowledged during the end of "Finale B," the creator of Rent died just hours before its off-Broadway debut. While Larson never saw the success of his show, the legacy lives on — in large part thanks to the iconic performances by Diggs, Heredia, Martin, Menzel, Pascal, Rapp, Rubin-Vega, and Walker-Browne. So it was only right that these actors who worked alongside Larson to create Rent got to take the stage again.

Most of the original cast defines the roles, especially since Diggs as Benny, Heredia as Angel, Martin as Collins, Menzel as Maureen, Pascal as Roger, and Rapp as Mark also performed the roles for the Christopher Columbus movie nearly a decade after Rent premiered. So Kiersey Clemons, Brandon Victor Dixon, Jordan Fisher, Vanessa Hudgens, Brennin Hunt, Mario, Tinashe, and Valentina had some pretty epic shows to fill. But clearly by the bonding that was going on stage, the original cast was happy to hand over their roles to this new generation — even if people were kind of hoping that the original cast would just do the whole musical all over again after Rent Live wrapped.

In particular, Menzel, Martin (with Dixon), Rubin-Vega, and Walker-Browne (with Keala Settle) really got to show off their vocal skills. But it was still heartwarming to see each of the original cast members lovingly interact with this new cast, especially as they celebrated their achievement of bringing the show to a television audience.

So even if you weren't overly impressed with Rent Live overall, the original Broadway cast's performance should have reminded you exactly why this show is so special. And also how Rent has the magical ability to bring so many people from so many backgrounds together.

More like this
Where Is Lionel Dahmer Today? Jeffrey Dahmer’s Father Reflected On The Serial Killer’s Death In 2020
By Brad Witter
Here's What Jeffrey Dahmer's Dad Has Said About His Other Son, David
By Grace Wehniainen
'Reservation Dogs' Season 3 May Finally Mend Bear & Willie Jack’s Relationship
By Gretchen Smail
Glenda Cleveland Died 2 Decades After Trying To Turn In Neighbor Jeffrey Dahmer
By Brad Witter
Get Even More From Bustle — Sign Up For The Newsletter