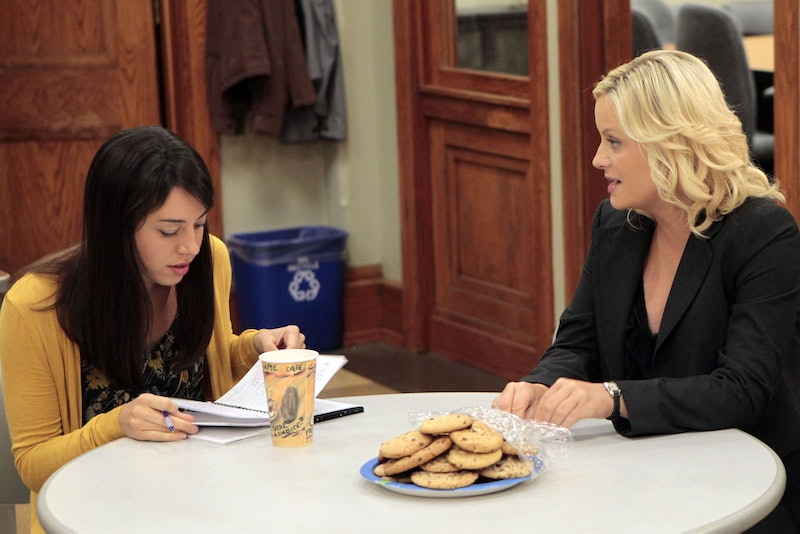 Leslie Knope's legacy of "ladies celebrating ladies" lived on in Thursday's special Galentine's Day Parks and Recreation reunion. On the 10th anniversary of the first Galentine's Day celebration, Parks and Rec stars Amy Poehler, Rashida Jones, Aubrey Plaza, and Kathryn Hahn reunited, and Plaza shared the photo on Instagram. There's no word on whether or not there were waffles at their get together, but just seeing some of the women of Pawnee keeping the tradition of Galentine's Day alive is reason enough to celebrate.

Plaza captioned the photo with a simple "happy galentines day." However, given that the holiday Leslie Knope made up way back in Season 2 of Parks and Rec has taken on a life of its own, it feels extra special to see some of the participants of the first celebration still using Feb. 13 as a day to cherish the special women in their lives. These days there are official Galentine's Day cards and discounts for BFFs, but back in 2010, the fledgling holiday was just Leslie's way of showering her gal pals with love. And even though 10 years have passed since the first Galentine's Day, it looks like many of the show's friendships are still going strong off screen.

In fact, this is the third year in a row that Plaza has shared photos from her Galentine's Day celebration with Poehler and Jones. Hahn wasn't in the 2019 photo, but she did appear in Plaza's post for 2018, which included the timeless caption: "happy happy galentine’s day. these women keep me alive."

Since Parks and Rec ended in 2015, the show's cast has continued to support each other and work together, much to the delight of the show's fans. In 2019, the entire cast celebrated its 10th anniversary with a panel at PaleyFest, and in 2017, Poehler, Retta, and Chris Pratt joined Plaza for the premiere of her movie Ingrid Goes West. Beginning Feb. 16 on Fox, Leslie and Ann fans can rejoice, because Poehler and Jones will be reunited every week on the animated comedy Duncanville.

In January, Jones posted a behind the scenes Duncanville video on Instagram, and shared how excited she is to work with Poehler again. "As always, it's a dream working with my BFF, Amy, my work wife," she said.

Clearly, the women of Parks and Rec have taken the teachings of Leslie Knope to heart, and they seem to love celebrating the amazing ladies in their lives on Galentine's Day... and every other day of the year.