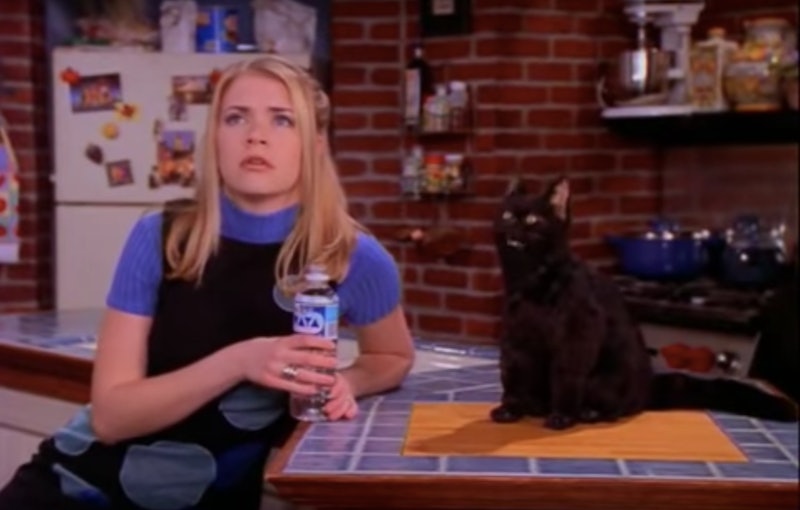 The late '90s-early 2000s sitcom sensation Sabrina the Teenage Witch is getting a reboot, but the plot of the new Sabrina series will take a dark and horrifying twist. According to reports from Vulture, Chilling Adventures of Sabrina will be unlike anything fans could've ever imagined from the friendly teenage witch. The Chilling Adventures of Sabrina comics, upon which the show will be based, are terrifying — and give you a pretty interesting idea of what to expect when the show actually airs.

According to TVLine, the Roberto Aguirre-Sacasa-led series will be introduced to fans as a companion series to the dark teen drama, Riverdale, and serve as a spook-filled reimagining of Sabrina Spellman's origin story and mysterious adventures. Although the intricacies surrounding Sabrina's new tales remain a bit scarce, the Archie comic book series that the show will be based on was also written by Aguirre-Sacasa, so you know this is going to be good.

In the first issue of Chilling Adventures of Sabrina, which Nerdist explains is set in the '60s, things kick off with Sabrina being born to warlock father and mortal mother. As an infant, Sabrina was promised to Satan and ordered to be placed in a coven shortly after birth. Upon her arrival, however, Sabrina's mother Diana had a change of heart; fearing for her child's well-being, the new mother made an attempt to run away with the newborn.

Needless to say, this escape plan didn't work out for Diana. Left to be raised by her aunts, Hilda and Zelda (who are much less jovial and comedic than on ABC's T.G.I.F. lineup), Sabrina's magical powers quickly begin to hinder her desire to live as a normal high-schooler. Throughout her adventures, Sabrina crosses paths with characters from Riverdale, which takes place across the river from her hometown of Greendale.

In the comics, Sabrina's quest for normalcy is also often interrupted by the interference of the villain, Madam Satan, who intends to seek revenge on the teen for the betrayals of her ancestors. A jilted ex-lover of Sabrina's father, Edward Spellman, Madam Satan was accidentally freed from hell and later returns as Evangeline Porter, a teacher at Baxter Senior High School where she is able to keep close tabs on Sabrina.

The incessant threat of Madam Satan causes Sabrina to have to make some terrifying decisions — for good or for ill — as she is frequently forced to commit heinous acts as a means to ensure her survival, according to Comixology.com. Throughout the comic series, Sabrina fights viciously against the evils bestowed upon those closest to her by the diabolical villainess, and eventually finds herself amidst an all out witch war when Madam Satan threatens the safety of her love, Harvey Kinkle.

Unfortunately, Harvey is killed after being lured into the woods by Madam Satan to witness Sabrina's initiation into the Church of Night — a ceremony that the witch's council takes very seriously and deems that no mortal shall ever witness. Distraught by Harvey's death, Sabrina enlists the help of Riverdale students and fellow witches, Betty and Veronica, to help bring Harvey back to life.

Although these events have continued to pose a threat to her happiness and would make anyone into a more twisted version of themselves, Nerdist noted that Sabrina's intrinsic personality remains unchanged. She's still a sweet teenager whose ultimate goal is to find love and make her family proud. However, it's unclear just how closely the show will follow the comics.

While the new rebooted Sabrina may not be quite what we're used to seeing from the formerly happy-go-lucky witch, The Chilling Adventures of Sabrina could be just the variation that modern-day television needs to keep viewers on the edge of their seats.