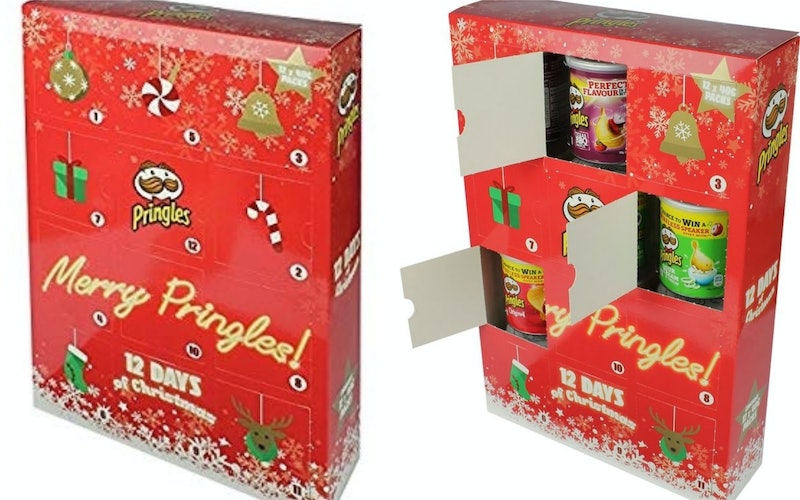 Y'all, we have seen a lot of bonkers advent calendars this year, and we haven't even reached Halloween. So far we've been blessed with a Harry Potter advent calendar, a cheese advent calendar, and even a wine advent calendar — and while those promise to keep us both physically and nerdily satiated in December, they are, perhaps, missing something. Something like, say, maybe a chip-like vehicle to consume with the cheese, wine, and nerdery. Enter the Pringles advent calendar, which returned for 2018 after popular fanfare last year.

A bit of a caveat on this '90s baby bait: Pringles, despite being beloved both as a snack and as a prime opportunity to give yourself duck lips that you can eat, is only selling this advent calendar in the UK. The 12-day calendar of Pringles mini tins launched in 2017 for around $7.99 at British retailer B&M (where it swiftly started selling for up to three times its retail value on eBay, per Delish), and after its popularity, it appears B&M has brought it back for a second year — images of the second iteration leaked online in September, and B&M confirmed that it's coming back, per UK publication Chronicle Live.

A quick scan of Twitter seems to indicate that while customers are definitely looking for it, it may not have hit many stores yet, so we may be sitting tight. But hey, if you can't get your hands on one and are passionate enough about Pringles to pay for them at a significant markup, then I have excellent news for you: you can, in fact, obtain of these bad boys on eBay, where they're selling for between $30 and $35 a pop. A word of warning, though, that it's unclear whether these sellers are hawking last year's version or the 2018 one. It may be best to wait until the second one gets a clear wide release, at which point you can either buy one from a second party, or book a last minute ticket to London, grab one of these bad boys from a B&M near Heathrow, and fly back with your spoils.

If you do manage to obtain one, you have plenty of delicious flavors to look forward to, including original, salt and vinegar, Texas BBQ sauce, and sour cream and onion. Otherwise, you may have to just DIY this situation by getting a bunch of cans of Pringles, sticking them in the pantry, and closing your eyes to pick a random flavor every day in the 12 leading up to Christmas. A little less magical, maybe, but who can complain if that salty goodness is still hitting your digestive tract at the end of the day?

While you're waiting for a B&M re-release, we can all take another second to ponder the positively baffling tagline choice of "Merry Pringles!", which did not go unnoticed by customers for the past few years of the company adopting it and probably shan't this year as well. But why choose something that would, say, make some sense, like "Pringle all the way!" or even "Merry Pringle-mas!" when we can have the gift of scratching our heads at this delicious conundrum? Happy Pringles to all, and to all a good Pringle.

More like this
How Long Does Leftover Stuffing Last? Here's When To Toss It
By Chelsey Grasso and Alexis Morillo
The Correct Way To Start An Advent Calendar, Explained
By Kaitlyn Wylde and Jay Polish
TikTok’s Viral Tunacado Sandwich Is The Internet’s Favorite Lunch Right Now
By Alexis Morillo
Pepsi’s Festive Flavour Is Finally Coming To The UK
By Sophie McEvoy
Get Even More From Bustle — Sign Up For The Newsletter