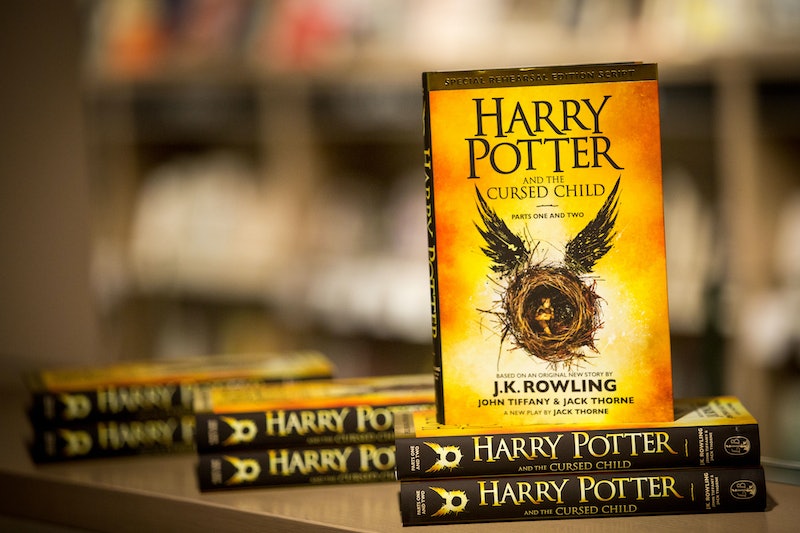 This year, Harry Potter fans learned the true meaning of the phrase "Be careful what you wish for." We've been clamoring for new Harry Potter details for years — and in 2016, we finally got them. Like, a ton of them. Now we know what school American wizards would go to; we know what Hogwarts house Albus Severus was in; we even know Hermione Granger's future job (and we love it). It's been amazing getting another glimpse into the lives of our favorite characters — but at times, dare I say it, it's also been a little ... disappointing.

Like that time we found out that Ron and Hermione only fell in love because of his jealousy over her taking Victor Krum to the Yule Ball. Or, um, that time we learned that Voldemort and Bellatrix Lestrange were doin' it this whole time. Yeah, that was a little weird.

All the new stories we've learned in 2016, from Cursed Child to Fantastic Beasts, have been J.K. Rowling-approved — which means they officially fit into the Harry Potter canon that we've all got memorized. But here's the problem: they don't all fit into the headcanons that true fans have been building over the last few years.

Almost 10 years ago, J.K. Rowling wrapped up her beloved series with the words "All was well," leaving her devoted Potterheads to imagine our own happy endings for the characters we so loved. We certainly didn't imagine Ron and Hermione keeping secrets from each other (even if it is only about eating toffee), or Harry struggling to form a healthy relationship with his son. And we definitely didn't imagine a whole new Hogwarts generation without an LGBTQIA+ student in sight.

Here's the problem: while we all obviously bow to the altar of Queen J.K. Rowling, who created the best magical universe of all time, her insistence on contradicting fan theories is rather stifling our own magical experience. And some of the new information she's retroactively added to the canon is downright problematic.

Famously, Rowling declared that she had always intended Albus Dumbledore to be gay — but only after the series had safely wrapped up. For LGBTQIA+ fans of the books, this was in some ways a hugely exciting revelation — but at the same time, it was a bit of a slap in the face. If Dumbledore was always supposed to be gay, then why didn't J.K. Rowling write him that way? Instead of a well-written gay icon, Dumbledore became a stereotype: the elderly gay man whose sexuality was repressed, and who ultimately died alone. Nothing for homophobic parents to get upset about — but nothing to inspire LGBTQIA+ readers either.

And then there was the time J.K. stuck up for the casting of a Black Hermione (great!) by claiming that Hermione had never been white in the first place (less great). Yes, there has always been a racial dimension to the struggle between Purebloods and Mudbloods — but if Hermione was really supposed to be Black, the descriptions of her become worryingly racist. Initially, Hermione is described as having frizzy hair and cartoonishly large front teeth — characteristics which Jerry Stratton from Mimsy Were The Borogroves says read like "stereotypical descriptions straight out of early comic strips." It gets worse: in order to become beautiful in Goblet of Fire, Hermione uses magic to shrink her teeth and straighten her hair. In other words, as Stratton explains, "if Rowling always meant Hermione to include the possibility of blackness, then the book also makes clear that jettisoning her blackness made Hermione beautiful." Eesh.

Of course, having a Black character or an LGBTQIA+ character or any other under-represented character in the Harry Potter universe would have been wonderful. But Black readers and LGBTQIA+ readers deserved to see themselves reflected back in the pages — not just added on as an afterthought. Dumbledore should have had a positive, three-dimensional love story, rather than just a subtle hint of a tortured and ultimately doomed love affair with Grindelwald. And it would have been great to see a Black Hermione who embraced those physical attributes that are often condemned by the beauty industry.

J.K. Rowling has since claimed that she imagined students of almost every belief system at Hogwarts — but these characters were never central to the Harry Potter story, and their culture was never acknowledged at Hogwarts. If Hogwarts celebrates Christmas, why not Hanukkah?

The truth is: Harry Potter was set in a straight, white world. J.K. Rowling has since proved herself to be a big promoter of diversity and tolerance, but by retroactively adding diversity to the Harry Potter canon, she's undermining her own message. Instead of reassuring us that people of color were present at Hogwarts behind the scenes, I'd like to see Rowling acknowledge that Hogwarts in the '90s was pretty whitewashed — and that she can do better.