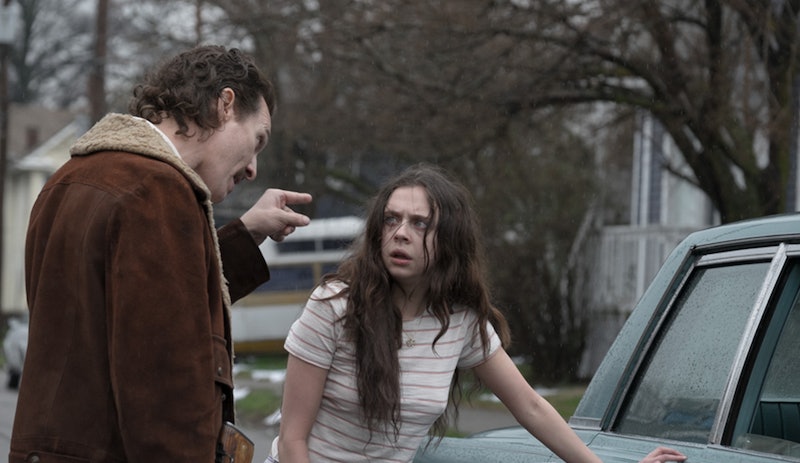 The central plot of the '80s-set drama White Boy Rick, out on Sept. 14, revolves around the title character — a teenage boy living in economically depressed Detroit who begins buying and selling drugs as an FBI informant, but then turns back to the game when the government leaves him behind to fend for himself. Based on a true story, the film is a worst-case-scenario look at the Reagan administration's "War on Drugs" and its inability to improve the quality of life for families like Rick's, stuck in neighborhoods flooded by substances but bereft of options. British actor Bel Powley plays Rick's sister Dawn in White Boy Rick, and she considers her character's addiction arc to be tragic example of how these enforcement policies failed women and girls in particular.

"What’s happening in the family is almost a microcosm of what’s happening in the city," Powley says, sitting in hotel room during the Toronto International Film Festival. "It’s this vicious cycle. The men couldn’t get jobs so they’re going out getting jobs dealing weapons or dealing crack. And the women can’t get jobs either, but the women can’t become drug lords or drug dealers or weapons dealers. So then the women would date drug dealers, and then become addicted to drugs."

According to The Guardian, the real Rick Wershe Jr. was sentenced to life in prison without the possibility of parole in 1988 after he was convicted of cocaine possession, per a Michigan law involving amounts over 650 grams (which is about a pound a half.) He was just 17. ClickOnDetroit reported that he was paroled in 2017, but after pleading guilty to involvement in a car theft ring while behind bars, he's being transferred to Florida to serve out that sentence. Another ClickOnDetroit article states that Wershe is expected to be released in 2020. He has claimed that he pleaded guilty to the second crime to spare his mother and sister Dawn from being charged.

Neither Powley nor the film's director Yann Demange were in contact with the real Dawn Wershe during the development or the shooting of the film, and the actor says that she believes that Dawn "kind of comes in and out" of Rick's life. But Powley did have access to Rick via several phone calls, which she said were "very necessary" for her.

"The first time we spoke, we spoke for about an hour, and he just kind of gave me a play-by-play of him and his sister’s life," she says. "So he told me loads of really lovely stories and anecdotes of when they were little kids, before their mum left, when things were good. And then he also told me some really horrific stories of after she became a drug addict."

The first scene in the movie that features Dawn shows Rick and his father (Matthew McConaughey) coming home to find her hooking up with her boyfriend on the couch — a boyfriend she chases out onto the street in her underwear just moments later. It got laughs at the TIFF screening I attended, but there's foreshadowing in Rick's observation that Dawn is visibly high.

And as broken as their family is — and Dawn is very resentful of their father in the movie, which drives her into an even worse situation — there's an instantly established protective relationship between the siblings that gives White Boy Rick a great deal of heart.

"It’s almost like they parent each other. Like they have that sibling camaraderie but they protect each other and they really look out for each other," Powley explains. The Diary Of A Teenage Girl star didn't find it difficult to find that chemistry with newcomer Richie Merritt, who was just 15 when he won the role of Rick. "He’s such an open hearted, honest, funny, energetic, beautiful... I guess, is he a man or a kid?" Powley laughs. "Child. Teenager. It was really easy to work with him."

What was much more of a challenge for the actor was playing Dawn as she moves in with her dealer boyfriend and is in the deepest valley of her addiction. Obviously, there's no healthy direct research for an actor to do for that kind of situation, so Powley turned to YouTube to figure out what crack cocaine dependency really looked like. "YouTube can teach you to do anything," she says incredulously, adding that she had her "favorite five" videos, which she would watch over and over again. (PSA: do not try this at home.)

Dawn's visceral struggle — marked by open sores, filthy clothes, and a vacant stare — contrasts Rick's glamorous rise in the game, so much so that Powley feels like White Boy Rick is "two movies within a movie." And her own work was exhausting. "It takes energy [to play high]," she explains, "because your muscles are tense, you would be shaking a lot. Your brain’s whizzing around. It’s definitely not like a low-key drug."

What this all boils down to is a strikingly current snapshot of poverty in America, and it's easy to compare the crack cocaine epidemic of White Boy Rick's mid-'80s to the opioid crisis of today. According to the Associated Press, the University of Michigan and Harvard are combining efforts in 2018 to curb rampant opioid usage in the most impoverished pockets of Detroit. The cycle continues.

"I think the ignored underbelly of society that the movie is about still exists now, and the issues of the failure of the justice system and drug abuse and gun violence still exist now," Powley says. "I think this is not the kind of movie that’s a morality tale or is telling us anything. It doesn’t have a message. It’s just showing you. This is a true story. This is how people lived and are living now. And this is in America."