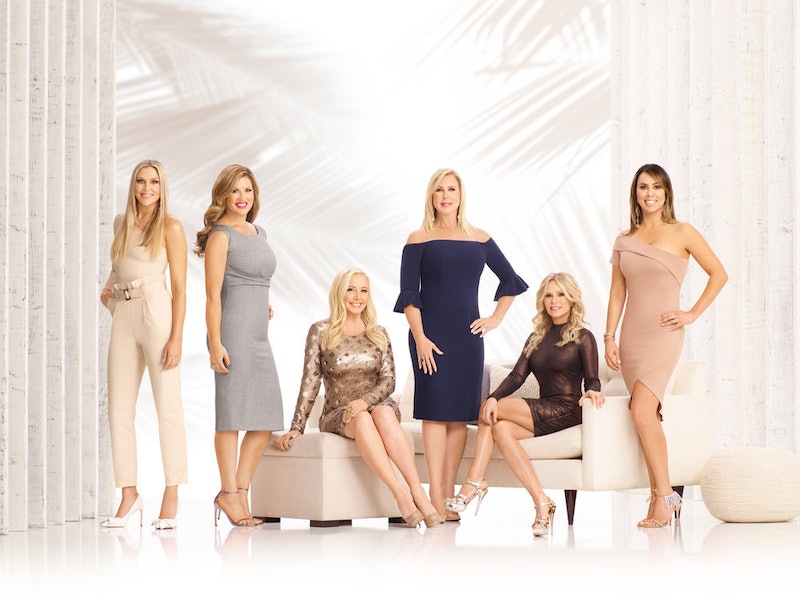 After having one of the worst seasons of Real Housewives history — per avid viewers of the franchise — Orange County is gearing up to premiere Season 13 on July 16. And although Instagram photos of Tamra Judge, Shannon Beador, and Vicki Gunvalson on vacation in Mexico hinted that there may something interesting ahead, the RHOC taglines aren't giving off the most exciting vibes.

As aforementioned, Season 12 was a total bust to fans and some pretty important television critics. All 21 episodes, including the reunion (which is typically one of the best episodes of any Real Housewives season), moved along ever so slowly — with the tossing of plates and menus being the high points. No, really... Orange County's Season 12 was so boring that fans were begging for Bravo to do a full cast overall. The popular network apparently took the social media suggestions seriously, as the exiting of three former cast members (Peggy Sulahian, Lydia McLaughlin, and Meghan King Edmonds) was followed up with the announcement of two new personalities joining the fold — Emily Simpson and Gina Kirschenheiter. But, if the Season 13 taglines are supposed to foreshadow the upcoming installment's revamped greatness, they just may have fallen a little short.

According to reports, Ohio native and married mother of five, Emily, doesn't consider herself to be anything like the other housewives. The attorney (with two bar licenses under her belt) and party planner may be a newbie to the OC frontline, but she definitely isn't new to the OC lifestyle. Emily was a party planner for OC veteran Tamra, and was even featured in one of the previous episodes as such, as reported by Romper. Oh, and as for her history with the other ladies, Emily and Tamra apparently had a best friend fallout a little while ago, so, if present on camera, the baggage between these two just may stir up some drama.

Just like Emily, Gina is also married with children — three, to be exact. Gina, who's only been in the OC for a few years, seems as though she'll be able to hold her own with the cast, however. In the trailer for the upcoming season, the Long Island native makes it known that she "doesn't do stupid," also proving that she isn't one to be walked all over. As for what she'll be bringing to the show — aside from hilarious one-liners, of course — the Season 13 trailer hints that the all-too-familiar relationship woes just may sweep her household.

Judging by the tags, veterans Vicki, Tamra, and Shannon don't seem to be experiencing as big of a life change as their newly-divorced castmate Kelly Dodd. But even her tagline isn't foreshadowing much, either. OK, so, sure... not everyone can throw shade as expertly as Real Houswives of Atlanta's Kandi Burruss (remember when her Season 10 tag was the perfect comeback to Phaedra Parks?). But seriously, not one of this season's RHOC taglines even come close to that level of greatness. Still, these are just teasers, and there could still be so much drama to come.