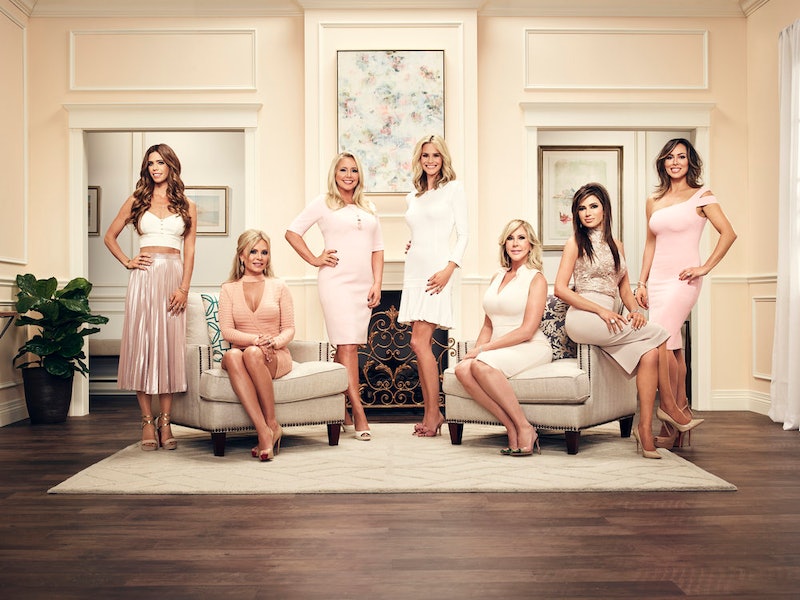 The ladies of the Real Housewives of Orange County are back — and, of course, bringing all of the drama. The RHOC Season 12 trailer is finally here and it just might be the most intense one yet. What makes it even more of a standout is new Housewife Peggy Sulahian, who is introduced to the group by Season 8 returnee Lydia McLaughlin. Sulahian definitely isn't afraid to speak her mind or make bold statements like, "I’ll make you look like a fool."

It's unclear just who Sulahian is talking to when she says that, but the fact that she makes such a declaration is proof that she's going to fit right in with the other women. Not only is Sulahian married to a custom wheel mogul with three children, but she is the 100th Housewife in the history of the franchise. Vicki Gunvalson may be the OG of the O.C., but Sulahian now has her very own title, too.

In addition to Sulahian, as fans probably expected, Gunvalson, Shannon Beador, Tamra Judge, and Meghan King Edmonds are all returning for another season of ridiculousness. As previously announced, Season 11 newbie Kelly Dodd is coming back as well. Despite my prediction that Gretchen Rossi would be making a triumphant comeback, she sadly isn't, but she and former RHOC star Lizzie Rovsek do make cameos in the trailer. Andy Cohen revealed in May that some "old Housewives" were returning and I guess he was referring to McLaughlin's series regular role and Rossi and Rovsek's guest appearances.

In addition to some new and familiar faces, the trailer also has some extremely heated fights — and a massive one involving Sulahian. For example, Edmonds yells in her face, "You're a f*cking b*tch." Then, Dodd, is seen screaming, "You want to throw a bomb, I'm going to throw a nuke." Lighthearted moments are also showcased, but who cares about those when you have all of this drama to digest, right?

There is a lot more going on in the sneak peek, so be sure to check it out for yourself. RHOC Season 12 officially returns to Bravo on Monday, July 10 at 9 p.m. ET.