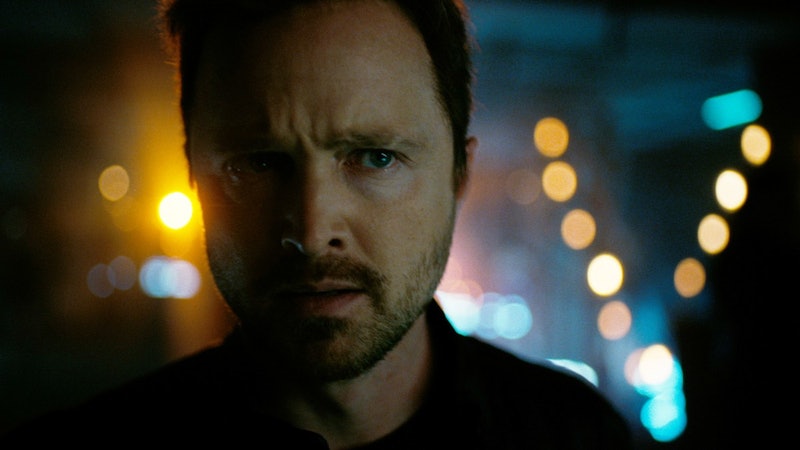 Spoilers ahead for the Season 3 premiere of Westworld. In its Season 3 premiere, Westworld enters a brave new world as Dolores — and the show — explore what's beyond the park. That means the introduction of new characters like Aaron Paul's Caleb, a military veteran struggling to adjust to an increasingly inhuman world. By day, he's employed as a construction worker alongside a robot partner (and is continuously turned down for other, better jobs); by night, he works as a criminal for hire, picking up off-the-books jobs sent his way by an app called Rico, which appears to be a sort of TaskRabbit for crime.

In our reality, "RICO" is short for Racketeer Influenced and Corrupt Organizations Act, which, according to Nolo.com's legal encyclopedia, is a federal law that allows for increased penalties and punishments for crimes committed as part of an "ongoing criminal enterprise." In Westworld's future, Rico is an app that enterprising criminals use to pick up local illegal gigs. The user can filter by the kinds of jobs they want; Caleb never does "personals," preferring to rob ATMs and deliver packages rather than do anything involving assault or murder. However, this is ultimately what leads him to Dolores: as one of his jobs is tangentially related to her kidnapping by the Incite goons.

Westworld co-creator Jonathan Nolan told Variety that he was inspired to create the fictional Rico app because of his obsession with blockchain. "Rico is an obvious parody of our algorithmic gig economy drawn to the extreme," he said. "It's facilitated in part by the idea of the blockchain. I don't think people understand how seismic that shift is going to be."

For the uninitiated, blockchain is a relatively new development that, while extremely complex, is at its root "a decentralized form of record-keeping," according to Investopedia. It has potential applications in banking, healthcare, property records, and voting, but its primary current use is as the platform that runs bitcoin and other cryptocurrency. That's because blockchain transactions are incredibly secure… and incredibly private.

Perhaps that's how an app developer in the future is able to outsource crime without getting caught — and even more importantly, without its users being immediately apprehended. In the grand scheme of things, Rico may just be a neat bit of the show's futuristic world-building — or it might play a larger part in Season 3's narrative. Who developed such an app, and for what purpose?

Reddit user hotscorn has a theory. As teased in promotional materials for Season 3, Incite's advanced AI system is called Solomon. Hotscorn points out that part of the mythology around the real King Solomon is that he summoned a horde of demons to build a great temple. Has Incite's Solomon summoned a horde of demons to build its own metaphorical temple? Is this AI system using the Rico app to find criminals and — instead of having them run rampant and wreak havoc on society — funneling their illegal activity and utilizing it to shape the world according to the company's agenda?

It's entirely possible that the Rico app is just another way Incite is keeping the world under its control, stripping humanity of its free will in the name of peace. But you have to wonder… if Incite's AI is controlling Rico, is it a coincidence that it sent Caleb on a path to intersect with Dolores? And if it's not a coincidence, why would the system want these two people to meet? Is it trying to help Dolores' plan along or hinder it?

The only thing that's clear is that Season 3 has plenty more mysteries to unravel.