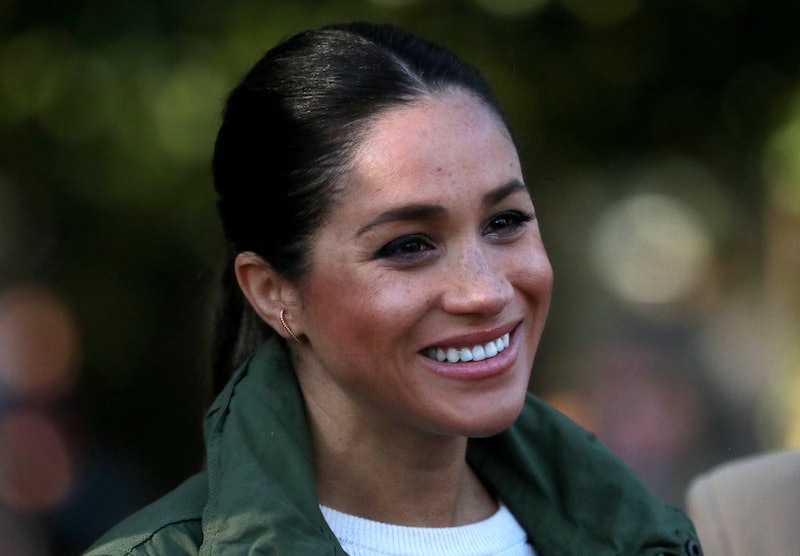 Well, the royal baby has missed out on being born on their great-grandma Queen Elizabeth's birthday of April 21. (Unless this is one particularly sneaky baby.) And while that's bad news for anyone who was betting on the two sharing a b-day, the royal baby due date odds continue on. This baby has to get here sometime, something Meghan Markle is way more well aware of than the rest of us.

According to People, Markle said herself back in January, that Baby Sussex is due in late April. Cosmopolitan reported that she has also said late April or early May. Either way, it is late April now, so this baby is coming any day. And while Markle and Prince Harry know what the actual due date is, the fact that the public has no specific knowledge on the subject isn't stopping odds from being placed.

Getting even more specific, Express reported on April 20, that Ladbrokes had the highest odds, 5-1, on the baby being born on Tuesday, April 23. If this ends up being the case, Baby Sussex will share a birthday with their cousin Prince Louis, who was born on the same date last year. Express notes that this is also the birthday of another cousin, albeit a more distant one, Lady Gabriella Windsor. Meanwhile, the odds for the baby being born on the Queen's birthday, April 21, were 8-1 at the time, but unless the baby was born in total secret — which is reportedly not the plan — that didn't happen.

As you can see, the best odds are for dates in April, specifically this week, and there is a reason for that besides what Markle has said about when the baby is due. As Hello! reports, Prince Charles and Duchess Camilla have scheduled a royal tour of Germany for May 7-10, and since they would probably like to be around when their grandchild is born, it seems likely the baby will be born before May 7. I mean, this was the case anyway, because May 7 is the end of late April, early May territory, but still, it's another sign the baby will be here in the next two weeks... and possibly tomorrow. Or today! Who knows!

In addition to the due date, bets can be placed on a number of other royal baby related topics, including the baby's name, weight, and sex. The top names for girls include Elizabeth, Diana, Victoria, Alice and for boys, Albert, Philip, Arthur, and James, with the specific odds depending on the bookmaker. It is also thought that the baby is more likely to be a girl than a boy, and the best odds are on the baby weighing between 8lb.-8lb. 15oz.

Can't wait to meet ya on April 23, Victoria Elizabeth weighing in at 8lb. 3oz.!