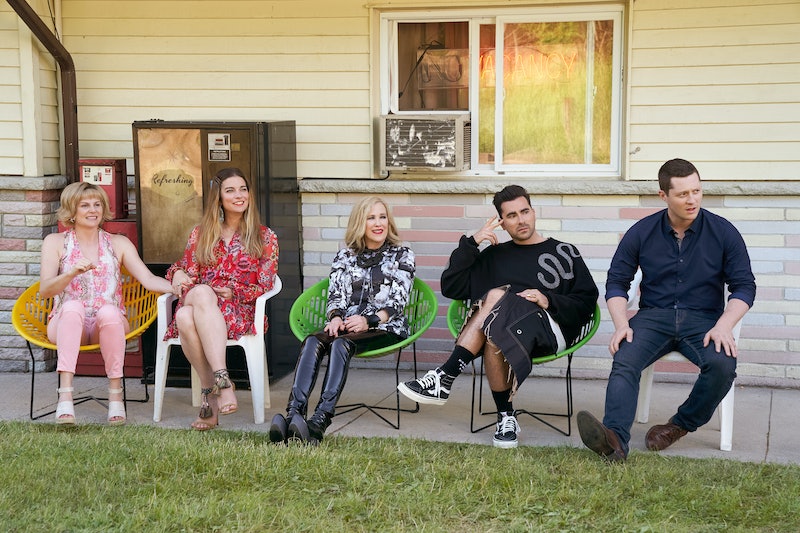 Now indelibly changed people, the Roses have finally gotten to a point where they feel (somewhat) comfortable showing affection towards each other: Johnny drops everything to fix David's wedding day, Moira officiates through tears, and Alexis tells David, without hesitation, that she loves him. They've also grown immeasurably in other ways — so much so that Alexis tells her mom, "A part of me feels like I'm almost glad that we lost the money." And they've left a mark on their fellow townspeople, too.

So before we say "best wishes" and "warmest regards" to this oddball Canadian comedy, let's look back at how far everyone has come.

Who knew that of all the Roses, it would be David who would stay in town — especially given how "personally offended" he was by Café Tropical upon first encountering it. Though he was spoiled and condescending when we first met him, David has since become a generous, loving man (and kept his delightfully dry sense of humor intact). He also successfully launched his own apothecary after accidentally running the Blouse Barn into financial ruin, played a game of baseball, faced his fear of heights, and fell in love. He and Patrick even snagged an adorable house that looks like Kate Winslet's cottage in The Holiday. Aw, David!

Soon after arriving in Schitt's Creek, Alexis tried to skip town with her scumbag boyfriend, Stavros. And after breaking up with her fiancé, Ted, she immediately started dating Mutt. But she's since become her own independent woman, getting her GRE, attending community college, performing a rousing rendition of her hit single, "A Little Bit Alexis," starting her own PR business, and making the difficult but mature choice to break up with Ted. Now, she's headed to New York to bolster her career — this time without a financial boost or man waiting for her as an incentive.

Upon first crash-landing in Schitt's Creek, the Roses couldn't have been more desperate to get out. But over the years, Moira has learned how to be a more giving friend as well as a more engaged parent. She's also weaned herself off of the many drugs she used to self-medicate with, had a successful career on the town council, starred in the Interflix hit The Crows Have Eyes III: The Crowening, and was even able to negotiate her way back into the upcoming Sunrise Bay reboot. Oh, and let's not forget the fact that her legacy will endure by way of the Moira's Rose's Garden.

Johnny, meanwhile, spent most of the show frustrated at himself for not being able to support his family. But ultimately, Stevie inspired Mr. Rose to use his business acumen and franchise a series of roadside motels. Now, he'll be able to help run the business while living with Moira in L.A.

When we first met Stevie Budd in Season 1, she was closed off, cynical, and unmotivated to leave her dead-end job at the motel. Since then, Stevie's had sex with David, immediately regretted it, starred in a local production of Cabaret, applied to be a stewardess with Larry Air, and helped launch a motel franchise.

Out of everyone in the series, Twyla may have changed the least. She's still working at Café Tropical, just as she did when the Roses first met her in Season 1 — it's just that now, she owns the place. By all accounts, Twyla is happily staying put in town — when she's not visiting Alexis in New York, of course.

The Schitts will also be staying in town to run the motel franchise on a local level. Neither of them have changed a whole lot, but their friendship with the Roses has taught them it's OK to be selfish once in a while and to dream big. Plus, Roland gave the Roses a perfect parting gift: he finally changed the town sign. Now, it's plastered with the Roses' faces, and "Don't worry, it's his sister!" has been replaced with "Where everyone fits in."

More like this
6 Mind-Blowing Fan Theories About How Stranger Things Will End
By Kadin Burnett
'Friends' Creator Marta Kauffman Opened Up About Misgendering A Guest Character
By Grace Wehniainen
Why Sadie Sink Is Hopeful Max Will Return In Stranger Things Season 5
By Brad Witter
What Working At Marvel Is Really Like, According To A 'Ms. Marvel' Co-Creator
By Gretchen Smail
Get Even More From Bustle — Sign Up For The Newsletter