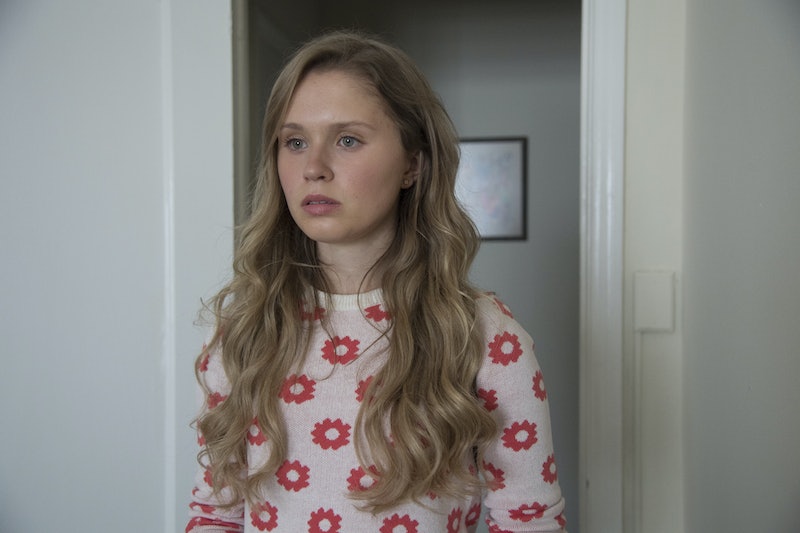 Spoilers ahead for the Sharp Objects finale.

Despite murder being at its center, Sharp Objects has consistently shown itself to be more concerned with developing its characters than it has been with following the procedural elements of the murders in Wind Gap. But that didn't make the Sharp Objects finale's reveal that Amma killed Natalie and Ann any less shocking. Though Amma (Eliza Scanlen) has been a complicated character throughout the series, constantly alternating between playing the docile daughter of Adora and a slightly menacing, rebellious teenage girl, Camille's discovery in the last moments of the finale that Amma has lined the floor of her dollhouse with human teeth is an utter gut punch we're left to contemplate as the credits roll. In case you still didn't want to believe Amma was capable of such acts of violence, Sharp Objects slipped in two post-credits scenes showing her actually committing the murders.

It's a bold way to end a miniseries — an intentional "mic drop," according to Gillian Flynn. Bustle spoke with the author about adapting her book into an HBO series, and she answered burning questions about the summer's most shocking series finale.

It’s taken a while to get a Sharp Objects adaptation made. Did you always envision the ending as the one that viewers saw on the show?

Gillian Flynn: We talked about it a little bit, but we kind of did like the idea of ending it on that big gulp of a revelation. We liked that idea particularly as we were plotting out that final episode, you know there was that question of how much do you show of the epilogue that is in the book [Ed note: in the book epilogue, Amma goes to jail for the murders of Natalie, Ann, and a new classmate]. And then you start looking at the actual pacing of what you can do and what an audience can sustain before they start suspecting, "Oh gosh, there’s gonna be another twist, another twist is coming," so we wanted to have them settle in and really think they’re starting to feel the rhythms of a real life and then get that big hit at the end. So that just felt correct for the series.

There are two post-credits scenes, the first one being where we actually see Amma killing Natalie and Ann. Why did you decide to show this visceral violence for the first time after the credits?

GF: Well, we knew, one, that we had to do some sort of [explaining to the audience] and do it in that very, very fast way. That idea that the audience is still sitting there watching and — about to turn to each other — going like, “Wait, oh my god, Amma did WHAT?” — [we wanted to then] show that, so that they had that satisfaction. We wanted some sort of resolution; we liked that one-two punch. And then the idea of showing Amma is the woman in white at the end, to me is going back to the idea that this is a folkloric fantasy tale at its core, and that ghosts will always still haunt you.

Is there a moment in the show that you feel was a tip-off to the killer's identity?

GF: Well, it’s more emotional. It’s an emotional story rather than, you know, you’re not going to go back and find that Amma has written “I did it” in dust on Camille’s windshield or something. It’s psychological so it’s up to the audience to go back and think, why did Amma ultimately sort of collude with her mother in a way to allow herself to be sick, and what was that bargain for? We like to make the audience question and come to their own conclusions about what that does to Amma, what being under Adora’s roof has done to Camille, and what it did to Amma, and how they each acted out their violence in different ways.

Did you always plan for Amma to be the killer in the book?

GF: No, in fact, Amma was not even in the original draft of my book. There was a group of mean girls trolling the town and the original killer was actually Ashley, who in the book is called Meredith. Ashley, the cheerleading girlfriend of John [Keene]. And then I got partway through and rewrote that, and I kept realizing that these nasty little girls kept showing up in my story for no reason, and then I thought, "I think Camille has a half sister," and I rewrote that entirely and realized I had a story about three generations of women and how each of their different ranges of violence looks generationally, and that’s when I kind of knew I had my book.

Was Adora’s Munchausen by proxy in the original draft of the book?

GF: That was always there, yes.

Why do Adora and Amma kill the way they do? What motivates them, and do you feel like the way that they kill or inflict harm is a particularly female brand of violence?

GF: Well, to me [the question] was always, how does sickness look, and how does rage look, and how does violence look? Adora came from a certain generation where the best thing you could be was a wife and a mother, particularly where she came from, and that violence [in her] came out by over-mothering, by this Munchausen [by proxy] where she had to be credited and seen as heroic as the mother of a sick child, constantly rising to the occasion and wanting to take care of these other wild little girls, which partly Amma did not like. Amma did not appreciate [that] — she allowed herself to be sick and that was part of the deal: "I do this and I get you to myself, you don’t break that bond, that deal that we have made."

Camille turns her violence in upon herself, and Amma, who is of the generation where everything is broadcast and posted and spoke outward and pushed outward, takes that violence out on others. There’s a reason she picks Ann and Natalie [to kill] and that’s because they trespassed on that bond with her mother.

What do you think happens to Amma after Camille discovers the teeth in the dollhouse? Is there hope for Amma?

GF: I imagine she goes to the kiddie jail just in the way she does in the book. I always think there’s hope, I like to believe there’s hope, that there was a reason that she did for a while respond to Camille taking care of her and respond to Camille. There’s so many sides to Amma as we see throughout the course of the show. Perhaps the one that is healthy will someday fight to the surface in the way Camille has to fight constantly to get the healthy version of herself to the surface.

GF: That is not the plan, that is kind of why we ended with that big mic drop of an ending, [laughs] if you’ll forgive my expression.... But my characters always live on for me.

Do you picture the characters' futures after the first book?

GF: I do, I’ve always debated continuing on, writing another sequel to Sharp Objects. I always think what happened to Amma, or what happened to Camille after this colossal event. I could always check in on them [laughs].

So, is the door open for a Sharp Objects sequel?

GF: Not for the series, but for a book.

More like this
The 'Firefly Lane' Book Ending Teases Way More Tears To Come In 2023
By K.W. Colyard
'Bridgerton' S3 Teases Exciting Social Season For Penelope Featherington
By Bustle
'Bridgerton' Fans Will Love ITV’s 'The Confessions of Frannie Langton'
By Maxine Harrison
Lib & Will’s Romance In 'The Wonder' Is Very Different From The Book
By Sam Ramsden
Get Even More From Bustle — Sign Up For The Newsletter