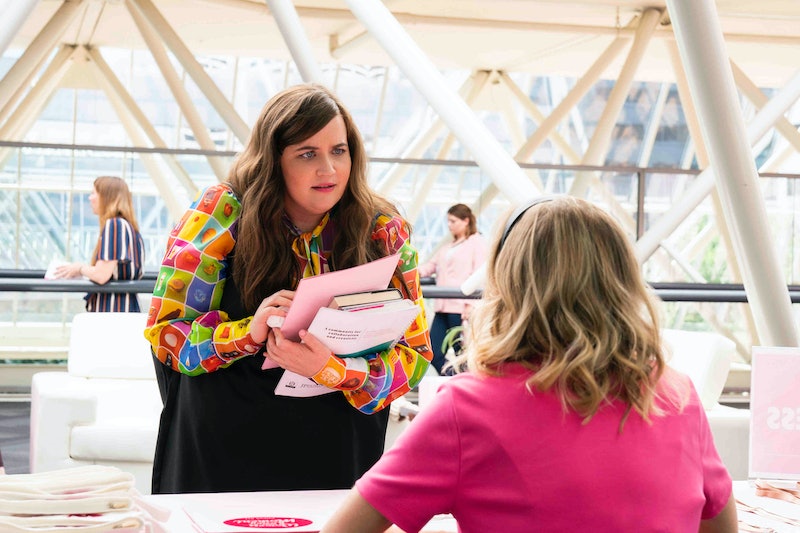 Aidy Bryant's Annie is back and striving to be more self-assured than ever in Shrill Season 2. After a transformative pool party that changed her relationship to her body in Season 1, Annie's new attitude also changes how she interacts with the rest of the characters in Season 2. The Shrill cast for Season 2 has all the major returning players in the form of Annie's coworkers, family, friends, and, yes, even her boyfriend Ryan. And they all better get used to a newish version of Annie as she starts advocating for herself more.

The Hulu series based on the book by Lindy West premiered in March 2019 and the second season kicks off right where Season 1 ended. Annie has quit her job at the Weekly Thorn, but that doesn't mean her time with all her coworkers and boss is over. And thankfully, she still has her best friend Fran and, perhaps less thankfully, her boyfriend Ryan by her side. Season 2 features new additions to the cast with E.R. Fightmaster, Illeana Douglas, and Bryant's former SNL costar Vanessa Bayer.

But here's everyone else (for better or for worse) who's been helping Annie find her voice in Shrill.

The British comedian Lolly Adefope plays Annie's best friend and roommate, Fran. Adefope told Vanity Fair when Season 1 premiered, "I think I was excited to not play a maid or a slave, or just, like, the stereotypical parts for black women. There is obviously the 'black best friend' stereotype, but I think Fran's a little bit different — because you see a very real example of female friendship." Fran gets an episode of focusing on her own family in Season 2, allowing the Miracle Workers and This Time with Alan Partridge actor to explore another element of Fran's life.

Annie's sometimes sex partner Ryan was pretty terrible in Season 1. But he and Annie start Shrill Season 2 in a much better space with Ryan actually (imagine this!) respecting his girlfriend. But Ryan still is a prime example of a "bare-minimum boyfriend" with a lot of growing up to do. Luka Jones himself admitted to InsideHook that he understands why people want Annie to break up with his character. For what it's worth though, Jones — who has appeared in small roles in movies like Her and The Campaign — claimed that Ryan really does love Annie, so viewers may be rooting for these two this time around.

Ian Owens' Amadi is one of Annie's best friends and coworkers at the Weekly Thorn. (His character is also married to Leslie Grossman, who popped up briefly in Season 1.) While he lost his friend at work (a true blow for any 9-to-5 professional), Amadi's career does improve in other ways. Like Bryant, Owens is a Second City alum — although he was based in Los Angeles as part of the improv comedy troupe's touring company.

The Hedwig and the Angry Inch star plays Annie's former Weekly Thorn boss Gabe and he'll appropriately get a musical moment in Season 2. He's loosely (but very loosely, according to West) based on West's former boss Dan Savage. As West told Observer, even though there are similarities between Gabe and Savage, "I hope that Dan watches it and does not see himself in this character."

While Annie might not be a fan of her Weekly Thorn colleague Ruthie, the real-life Bryant is a fan of Patti Harrison since the SNL star selected Harrison to play Ruthie herself. In Season 2, Ruthie shares she is transgender with her patented brand of rude humor and Harrison will get to display more of her sarcastic comedy style alongside Ed Helms in the upcoming Togetherish.

One of the Wet Bandits himself plays Annie's father Bill. Beyond Home Alone, Daniel Stern is mostly known for comedies, like City Slickers, but he has a serious cancer diagnosis on Shrill.

When you're a cast member of SNL, why wouldn't you cast a fellow SNL alum as your TV mom? (Doesn't hurt that Lorne Michael is also a producer of Shrill.) Annie might have problems connecting to her mom Vera, but Bryant and Julia Sweeney can bond about their SNL days with Sweeney telling AARP that Michaels and her love for Bryant inspired to come out of retirement for the role.

Bryant didn't stop with SNL alums since her current costar Beck Bennett plays Annie's internet troll. She confronted him in the Season 1 finale and Bennett's troll will return, so here's hoping Annie bests him again in Shrill Season 2.