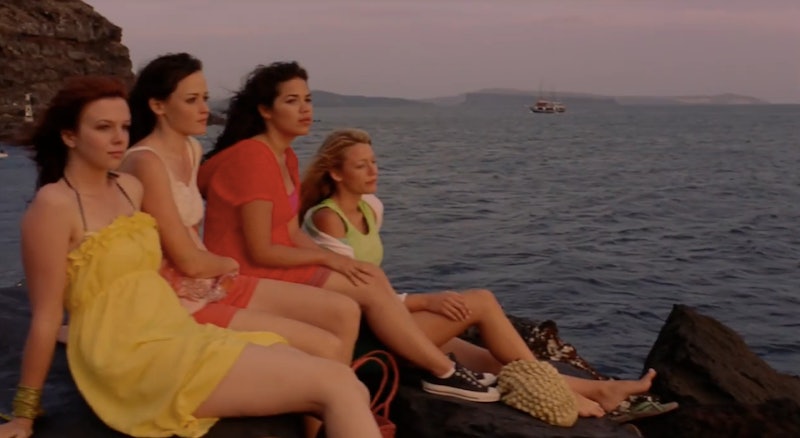 It's been a thrill watching the ladies from The Sisterhood In The Traveling Pants maintain their friendship throughout the years. From attending each other's weddings to movie premieres, the group's more-than-a-decade-long bond has truly withstood the test of time. Thanks to Amber Tamblyn, fans now know the secret to what keeps The Sisterhood In The Traveling Pants cast so close, via a recent MTV News interview. And it actually has everything to do with their differences.

While speaking to MTV News about the importance of having female friendships, the multi-talent couldn't help but boast about her own, long-standing, circle of friends. After all, the group pretty much has a life-imitates-art scenario going on, with their bond mimicking that of the iconic Warner Bros. franchise. According to Tamblyn, the actors have been able to keep close ties over the years because of their individuality. She said,

"The four of us are so vastly different that [it] kind of brings us together, in a weird way, because we learn so much from each other."

If you're thinking that what she said eerily reflects that of the Sisterhood's premise, you're completely on the right track. The films, chronicling the lives of four very different young women trying to navigate life, while keeping their bond in tack, totally highlight the cast member's uniqueness, and in turn, their tiny nuances — both culturally and familially — are what keeps them so close.

And because of this, Tamblyn noted that they're able to offer each other different perspectives on live, and advice. "That's what makes really good friendships," she told MTV News. "When you have key principles that connect you, but then at the same time, you have somebody that can teach you."

The early '00s phenoms helped to shine a bright light on the importance of female friendships. Though very distinct personalities, when together, Tibby (played by Tamblyn), Carmen (played by America Ferrera), Lena (Alexis Bledel), and Bridget (Blake Lively) created a beautiful mess of a support system that was present in the most important times of each other's lives — from deaths of parents to the birth of new siblings. And seriously, how cool is it that this movie camaraderie was able to transcend off the big screen into real life, too?

Tamblyn also clarified that their friendship isn't exactly an "all or nothing" type of deal, either. Because when you have a four-person team helping you through this thing called life, you'll find that, at times, some people in the group will be a little closer than others — and that's not necessarily a bad thing. "Sometimes I’m closer with America and then sometimes I’m closer with Blake, and then sometimes Blake is closer with Alexis," she said in the interview. The beauty of it all is that someone has at least one sister to lean on, and because they all bring different strengths to the table, each person is constantly learning new things about the other, and life along the way.

In the film, the young women didn't necessarily have the time to chat with one another every single day, but when it mattered most, they knew that they could depend on one another. The same can be said for these talents in real life as well. With tremendously busy schedules, the actors, moms, and wives don't get a chance to gush over each other's accomplishments as much as they'd like, but when they do come together — like to take a cute snapshot of them all basking in Ferrera's pregnancy, for example — it's seemingly a heartwarming occasion.

Just as in Sisterhood, no matter what part of the world each bestie was in, they had one thing that continued to unite them throughout their respective journeys. For Tibby, Carmen, Lena, and Bridget, it was a pair of magical, one-size-fits-all jeans that connected them, but for Tamblyn, Ferrera, Bledel, and Lively, it's the joint experience of starring in such a groundbreaking film that makes them soul sisters for life.