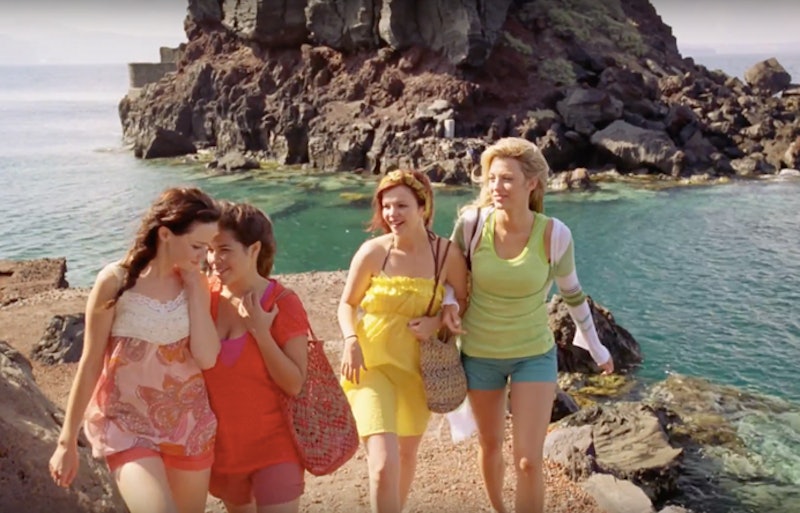 Here's a riddle: what's the secret to maintaining a friendship for more than a decade? Well, if you ask one of the Sisterhood of the Traveling Pants stars how they stay BFFs, the answer isn't a pair of magical jeans. Nor is it the fact that they're some of the biggest and most badass stars in Hollywood right now. Instead, it's something far more simple. "Oh gosh, patience," Amber Tamblyn tells me on the red carpet at the Paint It Black premiere on Monday night at the Museum of Modern Art.

"I think patience for any friendship is good, you know? Especially poor Blake [Lively]," she continues. "She's got two kids. So, sometimes I'll text her, and you don't hear back for a week and you're like, 'Hellllo?!' Oh, I forgot, you have two kids under the age of 2. That's insane."

Paint It Black marks Tamblyn's directorial debut — and you better believe that her Sisterhood co-stars are along for the ride. While only Blake Lively and Alexis Bledel attended the carpet, Tamblyn mentions America Ferrera will be joining later at the afterparty; she was busy with Upfronts earlier that day. (An Instagram snapshot confirms this is true. They all reunited by the end of the evening.)

While Lively and Bledel pose for photos and hug each other, they also let Tamblyn have her moment. There's plenty these two could've hopped on the press line to discuss — whether Gossip Girl reunion rumors or Gilmore Girls' paternity mystery or Handmaid's Tale's startling relevance — but it's not about them this time. Instead, Tamblyn gets the chance to really shine at her movie premiere with her pals by her side. It's also fitting she directed a film, given Tibby's story arc in the Sisterhood movies.

Sometimes, you might forget that, beneath the big-name movie premieres or glamorous award shows, at the core of it, this is a group of girlfriends. But that's a bond that Tamblyn doesn't take for granted.

"It's been really great. I mean, they're so supportive," she says of sharing life's big moments with the crew. "America... She's seen the movie like four times at this point. She's sort of like my biggest champion in seeing it. It's Blake's first time seeing it, it's Alexis' first time seeing it. So, we all go to each other's stuff and all support each other."

Really hitting the nail on the head, she adds, "And I think it's important to have women in your life that you can do that with." There's nothing quite like genuine friendship, especially in a society that sometimes pits women against each other or constantly compares them. The Sisterhood stars show that rooting for one another doesn't take away from your success; if anything, it only enhances it.

While that third Sisterhood of the Traveling Pants movie hasn't come to fruition just yet (the rumors have been swirling ever since 2014), fans can take solace in the fact that their real-life sisterhood continues. No ripped, patched, and Sharpied jeans required.

More like this
Amanda Seyfried Reflects On 'Mean Girls' & "Gross" Remarks That Men Made After It
By Jake Viswanath
Cameron Diaz Just Recreated *That* Iconic 'There’s Something About Mary' Scene
By Rachel Mantock
At 28, Minnie Driver’s Personal Life Was “Falling Apart”
By Kate Dwyer
'Dirty Dancing's Jennifer Grey Wants Harry Styles To Be The Sequel’s Love Interest
By Grace Wehniainen
Get Even More From Bustle — Sign Up For The Newsletter