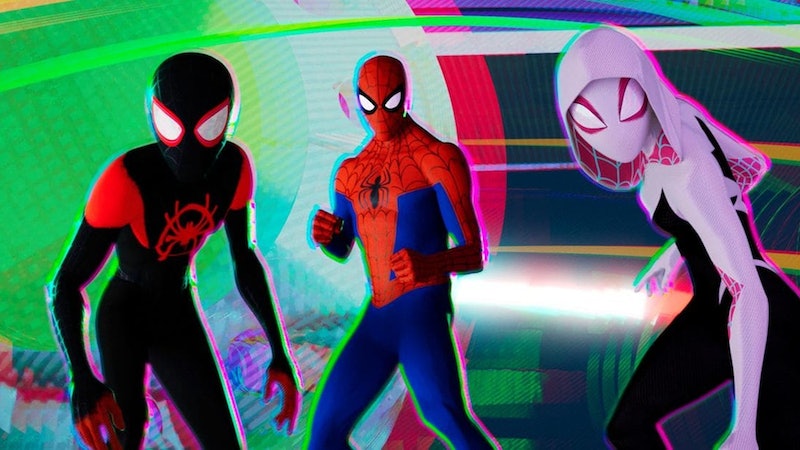 Get ready for all of your favorite friendly neighborhood spider-people to reconvene to fight crime once again. On Friday, Nov. 1, Sony Pictures announced the Spider-Man: Into the Spider-Verse sequel release date, confirming that the characters from the Oscar-winning animated film will return to the silver screen on April 8, 2022. The official Spider-Verse Twitter account didn't offer any details on what fans can expect from a sequel, but the quick video did pay homage to Miles Morales (Shamiek Moore) with a graffiti-inspired spider logo and the year 2022 added over the top.

Spider-Man: Into the Spider-Verse followed teenage web slinger Miles, who gets bitten by a radioactive spider and takes up the mantle of New York's favorite hero after he sees Peter Parker (Chris Pine) die. However, it turns out that the Peter Miles knows isn't the only Peter Parker out there, and after a wormhole opens up in multiple dimensions, Miles teams up with the friendly neighborhood spider-people — including a down-on-his-luck Peter B. Parker (Jake Johnson) and a crime-fighting Gwen Stacy (Hailee Steinfeld) — from those dimensions to take down Kingpin (Liev Schrieber) and stop his evil plan.

Reports of a Spider-Verse sequel first surfaced back in December 2018, just before the animated film officially arrived in theaters. According to Variety, the sequel will continue to follow Miles and his adventures as the newest Spider-Man, though it seems likely that the film will introduce even more webslingers into Miles' universe — or, alternatively, send Miles into an alternate dimension to offer his assistance this time around.

One likely candidate for the Spider-Verse sequel is Miguel O'Hara AKA Spider-Man 2099, who made a quick cameo appearance in the film's post-credits scene. Voiced by Oscar Isaac, Miguel — a half-Latino Spider-Man who was introduced in the comic books back in 1992 — showed his ability to travel through time in his brief scene. Considering that Spider-Verse has already introduced the idea of the multi-verse, it's not a huge leap to imagine that a team up of Spider-People from different periods of time could happen in the future.

In a November 2018 article, Variety also reported that Sony Pictures is also considering the possibility of a Spider-Verse spinoff, with the most exciting idea centering on "three generations of women with Spidey powers." Spider-Gwen is likely to be the female-centric film's main character, based on the overwhelming response to her character in the Spider-Verse franchise, but Variety suggests that other iconic Spider-Women characters like Madame Web, Spider-Girl, Spider-Woman, and Silk could make an appearance in the animated spinoff.

A few weeks later, Spider-Verse producers Chris Miller and Phil Lord told CBR.com that they'd love to see a series of shorts following John Mulaney's Spider-Ham hit the big screen in the future. "I just want to Spider-Ham's shorts," Lord joked with the outlet. "I want to spin off the Spider-Ham cinematic television universe."

One Spider-Man who likely won't appear in any of the Spider-Verse sequels or properties is Tom Holland's Peter Parker, though it is possible that a live-action Miles could appear in the Marvel Cinematic Universe one day. In 2017, shortly after a Spider-Man: Homecoming post-credits scene that referenced Miles sent fans into a frenzy, Marvel president Kevin Feige told ScreenCrush that the teenage webslinger does exist in the same universe as the MCU. "We definitely want you to go 'He's there. He's there somewhere,'" he said at the time.

For now, however, Miles fans will simply have to wait until 2022 to see their favorite graffiti-loving friendly neighborhood Spider-Man swing back into theaters.

More like this
Everything You Need To Know About ‘Black Panther: Wakanda Forever’
By Bustle Editors and Radhika Menon
'Bridgerton’s Jonathan Bailey & Simone Ashley Just Teased A First Look Of “Kanthony” In Season 3
By Grace Wehniainen, Alyssa Lapid and Sam Ramsden
The 'PLL: Original Sin' Creators Say A’s Identity Will Be “Very Clear” By The Season Finale
By Alyssa Lapid
'The Sandman’s Ending Is A Departure From Neil Gaiman’s Comic Book Series
By Kadin Burnett
Get Even More From Bustle — Sign Up For The Newsletter