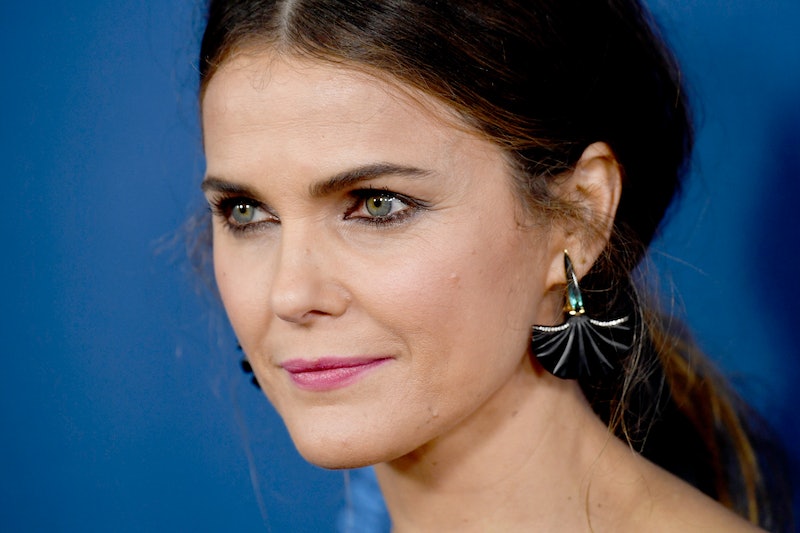 There's still quite a few months to go until Star Wars: Episode IX, but according to one of the franchise's newest cast members, the upcoming installment will be the most emotional one yet. During a recent conversation with the Associated Press, Keri Russell said she cried reading the Star Wars: The Rise of Skywalker script, so fans should bring plenty of tissues to the movie theater on opening weekend.

According to Entertainment Weekly, the actor — who will play the mysterious rogue Zorri Bliss in the upcoming film — was deeply moved by reading the original script, which was penned by longtime friend and Star Wars writer-director J.J. Abrams. "When I read his script that he wrote I cried," Russell recalled, though she did note that it's possible that major changes will have been made in the process of bringing Abrams' words to life. "I mean who knows what it will turn out to be and I hope it remains true to what he originally wanted."

Russell also explained that she thinks Abrams is the perfect person to helm the new Star Wars films due to his love of the original trilogy. "He’s not trying to change it to be something else," she explained of Abrams, who also wrote and directed 2015's The Force Awakens. "He really respects what it is."

In addition to praising Abrams' work on The Rise of Skywalker, Russell also described playing Zorri Bliss as a "dream," adding that she thinks her character looks "bad ass." The actor explained that when Abrams told her she'd be wearing a face-obscuring helmet, "I was like, 'That is my dream job. I can see everyone. No one can see me. Hello. Amazing!'"

While Russell couldn't tell the AP very much about the character, the June Vanity Fair cover story revealed a few details about Zorri, confirming that the mysterious new addition appears to live in the Thieves' Quarter on the planet of Kijimi, which means she could either be a major asset — or a terrifying threat — to the Rebellion in their final fight against the First Order.

Back in April, it was revealed that The Rise of Skywalker will bring the "Skywalker Saga" at the heart of the Star Wars films to its conclusion, which makes the film even more special for Russell, who told the AP that the original trilogy were some of the first movies she saw in theaters. "I have such memories of Princess Leia and Chewbacca and Han Solo, I have such memories of them — like everyone does," she said. "So, yes, it’s incredible to get to be whatever part I am."

Though Russell — and the rest of the cast — are keeping details about the film under wraps, Abrams did reveal during the the 2019 Star Wars Celebration in Chicago that Episode IX will take place about a year after the events of The Last Jedi and will see the characters set off on an "adventure" that will bring the fight between the Jedi and the Sith orders to a climax. "This movie is about this new generation and what they've inherited — the light and the dark — and asking the question, 'As they face the greatest evil, are they prepared? Are they ready?'" Abrams teased at the event.

The cast and crew of the film might not be able to offer up any more details about what to expect from The Rise of Skywalker, but based on Russell and Abrams' comments, it seems like it might be the emotional conclusion to the Skywalker Saga that fans have been hoping for. Just make sure to emotionally prepare yourself before Episode IX opens this December.