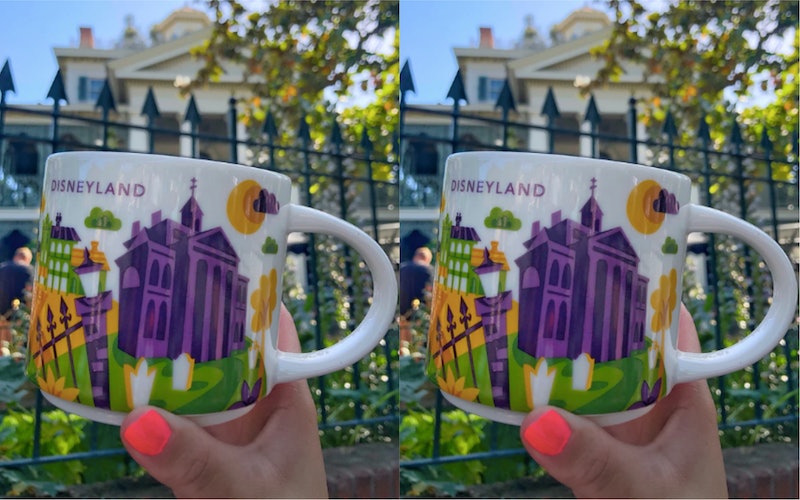 Pop quiz: what's the best part of the Disney parks? If you said the churros, you were close. I'm talking about the exclusive Starbucks mugs at each park, depicting each one's most iconic scenery. The New Orleans Square location must be having inventory issues, though, because their Starbucks keeps running out of the Haunted Mansion mug, reports PopSugar, and coffee will never taste the same again.

If you've ever visited a Disney park, then you've possibly popped in their Starbucks for a drink and a snack and noticed the exclusive mugs depicting that park. You can't find them anywhere else. These mugs are kind of like the curly straws we used to drink from as kids — they just make everything taste better.

It's no surprise, then, when New Orleans Square's Starbucks on Main Street released a mug featuring not only the Haunted Mansion but the Pirates of the Caribbean (arrr!), people had to get their hands on one. Therein lies the problem: as soon as the mugs hit the shelves, they fly off, says PopSugar, referencing Instagrammers' comments about the rarity of said mug. Nobody even cares they'll set you back $17 a pop — which would normally give me nightmares and horrific buyer's remorse if it wasn't the coolest looking mug, like, ever.

Look at this beauty! Considering Halloween is mere months away, Sbux better stock up, because this mug is perfect for the spooky season.

And here's the Pirates of the Caribbean on the other side of the same mug. The colors!

Whatever your hot beverage of choice may be, you need one of these. Everyone at work will be so jealous.

The New Orleans Square mug is one of many, and they're all special in their own way. And I'm not trying to get you all worked up or anything, but... they have tumblers too. (Did anyone else just start sweating?) Aside from Disneyland, you can also head to California Adventure, Magic Kingdom, Animal Kingdom, Epcot, and Hollywood Studios to find even more variations. There's never been such a beautiful marriage as that between Starbucks and Disney, and I suspect these mugs will look stupendous next to my white-and-red flowered mugs I bought on Amazon.

Visiting the Disney parks, in a sense, means you are a part of this exclusive club, because there are souvenirs you can only get at Disney and nowhere else. That likely explains the demand for the mugs — owning one sort of makes you a Disney VIP. Didn't you know? You're kind of a big deal.

Sure, maybe you can find a knockoff online or purchase it used off Ebay, but everybody will know you're a total faker and you'll probably be banned from the parks forever.

Disney is such a cool place to shop, there are entire Instagram accounts solely dedicated to all the best Disney finds, like the food and the jewelry and all the mouse ears.

You heard about the unicorn mouse ears, right? Run, don't walk, to Disneyland immediately before they're gone. Just look at the way they catch the light.

Our Disney obsession doesn't end there. They collaborated with TOMS to make princess shoes, and I need one pair of each, please. Then there was Target's Disney beauty line, which includes lip balm, charcoal face masks, green tea aloe mint hand cream, and black eyeliner, because who cares that my hands shake and I can't evenly apply eyeliner to save my life?

And I'd be out of my mind if I didn't at least mention Downtown Disney's homeware store, where you can buy plates and tongs and pillows and tons of other cool stuff to outfit your home in Disney.

The mug is just the latest in a long line of Disney stuff we have to have. The parks are great, yes. But the goods might be greater. Happy shopping!