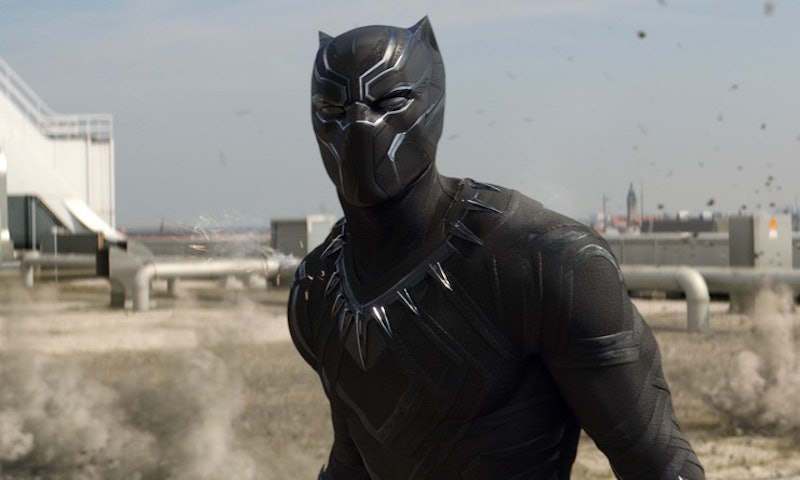 Finally, the art has been released, and, regardless of your feelings about the poster itself, I'm fascined by the symbols on the Black Panther poster. The image was released by Marvel on Friday, and it shows Chadwick Boseman seated in a throne at the center. Shafts of light penetrate the room behind him, lighting up strange runes that decorate both his seat and two of the pillars in the background. So what do they say? Bustle has reached out to Marvel Entertainment and Disney for comment, but have yet to receive a response.

Well, it pains me to tell you this, but we don't exactly know. Black Panther's alter ego is T'Challa, a member of the fictional African nation of Wakanda, and because the nation and the tribe are fictional, so too is the language. These characters likely have meaning only within the Marvel universe, and we'll have to wait to find out exactly what that is. For all we know, they could be incredibly relevant to the plot.

Through context clues, I gather that they are symbols of power and unity. Their presence in what appears to be a throne room suggests that they do something important. Maybe they are a retelling of the history of Wakanda, or an explanation of the transfer of power from Black Panther to Black Panther. The Wakandan chief also unites all the various tribes under his reign, so perhaps the runes offer an explanation of the peace in the region. The opportunities are quite literally endless, and February has never felt further away. Take a look for yourself in the image below.

It's also worth noting that the characters themselves are very unique. The ones on the wall are more elaborate and complex, but those on the throne are more simplistic, which makes me think they're more ancient, and potentially more powerful. They're also shadowed, which could mean they hold some kind of powerful magic that can be used for either good or evil.

Not a bad set up to a superhero movie, eh? I can't wait. And sure, it's a lot to read into a single image. But unless you have some kind of time machine that makes the months move faster, it's all we've got right now.