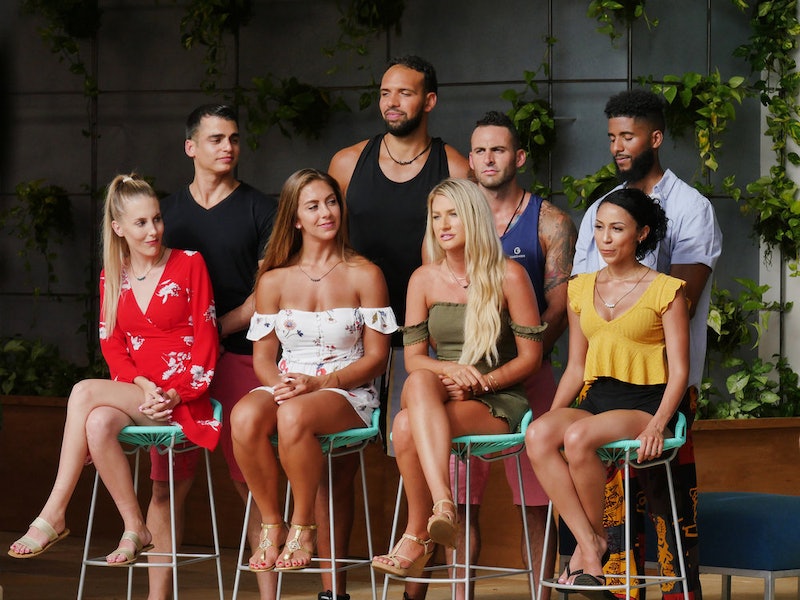 From The Bachelor to Are You The One to Married At First Sight, many dating shows are focused on falling in love, but few follow what happens afterward — when the grand, romantic dates have waned to Netflix and takeout, when the honeymoons have ended and the weeks have stretched into years. But Temptation Island, USA's reboot of the short-lived 2000s series, breaks that mold. During a particular wrenching moment in the Season 1 finale, Kaci Campbell and Evan Smith, one of the couples who arrived on the island to test their relationship, tearfully break up after Evan professes his love for Morgan, a single he met mere weeks ago. A devastated Kaci rides away in a black car, Bachelor-style — except The Bachelor, it is not. Here, the stakes are much higher. This is not the sad end of a weeks-long fling, it is the end of a decade-long, emotionally wrought relationship, one that involves shared homes and bank accounts and health insurance. One that, after they leave, will require the separation of lives and pets and things.

This is true of all of the show's couples, who have been together for varying degrees of time, and signed up because they were at some sort of crossroads. Kady and John loved each other, but had differing perspectives on what kind of "man" a husband should be, and how children should be raised. Karl and Nicole had been together for a couple years, but felt kind of stuck, and wanted to figure out if they were really right for each other. And Shari and Javen (who were high school sweethearts) wanted to discover who they were as individuals, as they'd been together most of their adult lives. Ultimately, they were the only ones who stayed together — but when they got engaged, you genuinely how felt much they loved each other, and there weren't any doubts about whether or not it was rushed or how they'd fare as a couple when the cameras stopped rolling. They'd already tread that road.

Temptation Island, admittedly, has a bizarre format: four couples come to the island, are separated into houses to live with a dozen or so singles for three weeks, and are left to essentially date those singles and decide whether or not there might be someone better out there. It's a lot to put on the line, as we saw with Kaci, Evan, and Morgan, and most couples probably wouldn't be willing to risk losing their S.O. for a social experiment masquerading as a paid vacation — which could be why Temptation Island is so one-of-a-kind. It's hard to cast people. But it does make for drama-packed, tear-filled, can't-look-away reality TV, and it also accomplishes something few reality shows are capable of: it's bracingly real. Yes, it's an unnatural scenario, but it forces the couples to confront underlying issues in their relationships that have otherwise gone unaddressed, and to make hard decisions about their lives with even harder consequences.

Some people might call a show like this a relationship killer, but if anything, it's a relationship saver, because it forces people to, quite literally, face reality. And man, is it entertaining as hell to watch.