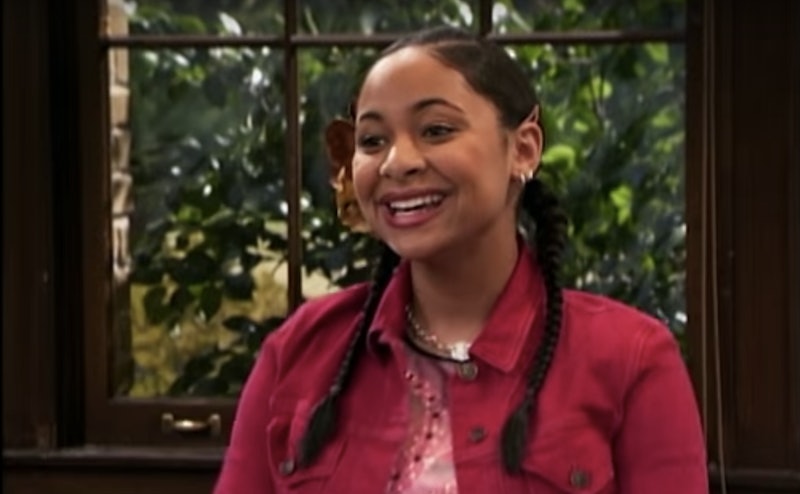 You guys, I have glimpsed into the future, and it looks amazing. On Tuesday, Disney Channel announced further details about the That's So Raven spin-off, and you're going to love it. According to a press release, the show will be called Raven's Home. Not only is Raven-Symoné reprising her role as the titular, hilarious character, but Anneliese van der Pol is also returning as Raven's best friend Chelsea. And if you're already victory-dancing at the sounds of that, then just you wait, because it gets even better.

The spin-off will follow Raven and Chelsea as divorced single moms, as they raise their two separate families together under the one roof. With multiple energetic young kids, the household sounds as though it's guaranteed to be chaotic, but full of fun — especially with best friends like Raven and Chelsea running that ship. Adding to the domestic chaos, however, is the fact that one of Raven's children appears to have inherited her talent for seeing the future, which I can only imagine will turn that household upside-down and back again.

Aside from Raven-Symoné and van der Pol, the cast includes black-ish's Issac Brown and Being Mary Jane's Navia Robinson as Raven's twins, Booker and Nia. Meanwhile, Chelsea's son will be played by Jason Maybaum. America's Got Talent's Sky Katz will play Nia's BFF.

So far, Raven's Home sounds like perfect family viewing. It'll bring together older members of the family who loved That's So Raven, along with the younger members who might be unfamiliar with its greatness. But what's truly making me want to stand up and applaud is the progressive decision to frame the story around two single moms choosing to raise their children together.

Because this is exactly how modern families look, and the scenario deserves to be explored and celebrated within a TV show. On the one hand, this is a domestic set-up that makes financial sense for single-parent families, but it also provides crucial parenting support, and let's face it — a whole lot of fun too. I mean, who wouldn't want to raise their children with their best friend close by?

By choosing to place an alternative family set-up at the heart of Raven's Home, the show looks like it might be able to bring some heartwarming visibility to co-parenting households. Even better, it has the potential to do so in a manner which is accessible, hilarious, and seriously relatable (because that really is just so Raven).

I might not share Raven's proclivity for seeing the future, but this small detail makes Raven's Home sound so forward-thinking that it's almost like I can. And I absolutely cannot wait for it air.

More like this
Vanessa Hudgens Proves She's Always A Wildcat At This 'High School Musical' Location
By Alyssa Lapid
The 'Hocus Pocus' Sequel Finally Has A Release Date & It Makes Total Sense
By Shannon Barbour and Radhika Menon
Everything To Know About 'Scream 6'
By Jack Irvin and Jake Viswanath
Emma Thompson, Lashana Lynch, & Stephen Graham Lead Netflix’s 'Matilda'
By Sophie McEvoy
Get Even More From Bustle — Sign Up For The Newsletter