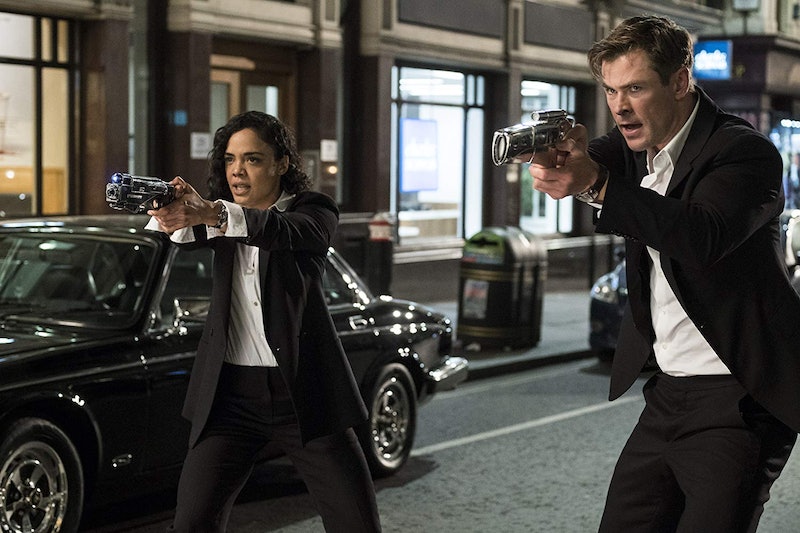 Tessa Thompson and Chris Hemsworth are taking the place of Will Smith and Tommy Lee Jones in Men in Black: International, as a new suited, universe-saving duo. The fourth movie in the franchise, in theaters now, brings Thor: Ragnarok costars Thompson and Hemsworth together once again, and it even plays off of their work in the Marvel film. And though the two leave their personas as Thor and Valkyrie in the MCU where they belong, the Thor references in Men in Black: International acknowledge the connection and the God of Thunder fans in the audience.

Molly a.k.a. Agent M (Thompson) talks her way into the agency after spending most of her life trying to find "the universe's best kept secret." She partners up with London-based Agent H (Hemsworth), and a seemingly simple mission becomes much more complicated when they learn that there's a mole within Men in Black, endangering the entire planet.

The very first full trailer for the film included a wink to Hemsworth and Thompson's last movie together. Agent H reaches out for a regular, run-of-the-mill hammer while attempting to defend himself from a hulking blue alien, a sight gag that'll make sense to anyone used to seeing the actor wield a much larger weapon. H tosses it at the alien, but of course it doesn't work out the same way as it does with Mjölnir.

That's undoubtedly a callback to Thor, but there are a few other jokes that could be subtle winks as well. In the second trailer, Kumail Nanjiani's CGI alien character Pawny pledges his loyalty to Agent M as his "queen," which could also be a possible reference to the events in Avengers: Endgame, wherein Thor entrusts the kingdom of Asgard to Valkyrie. Granted, he says she'll be "king," but the point is that Marvel fans recognize Thompson as royalty, possibly in this universe too.

But the most important thing that Thompson and Hemsworth brought over from Thor to MIB: International is their working friendship. "The first three pictures are very dependent on Will and Tommy’s particular chemistry and on the comic approach that [director] Barry [Sonnenfeld] brought," producer Walter F. Parkes told Entertainment Weekly. "So we knew we needed performers with these vivid personalities and an inherent rapport, and luckily we could see the seeds of that in Thor."

Hemsworth told Collider that while their characters' relationship is quite different from that of Thor and Valkyrie, he felt at ease working with someone he already knew well. "A lot of the time when you work with a costar you spend sometimes the first half of the shoot getting to know each other and so to not have to do that is always a huge relief," the actor said.

So whether you noticed the Thor jokes in the movie or not, Hemsworth and Thompson's presence alone should satisfy fans who loved watching Thor and Valkyrie bicker and fight alongside each other. It's unclear when or if we'll see those two characters again, though we may have another H and M adventure to look forward to soon.