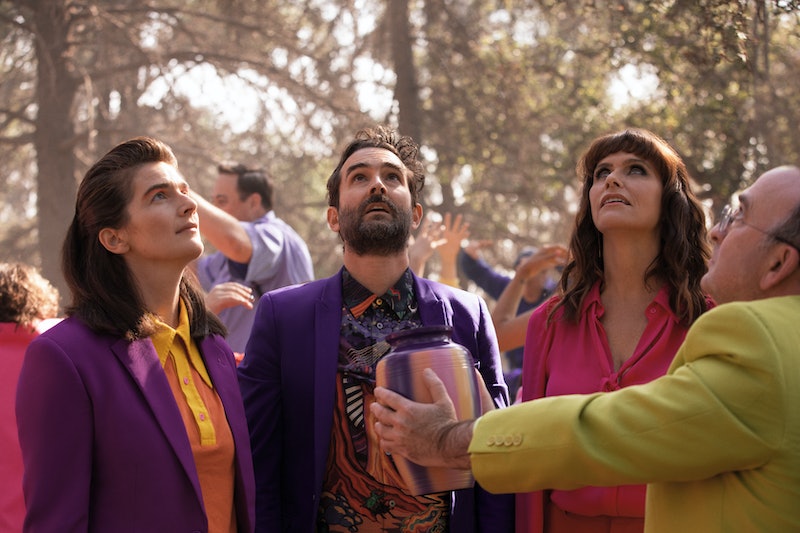 Maura's death isn't too much of a surprise, as Tambor's character was written off the show after he was fired for his alleged sexual misconduct on set after Season 4 wrapped. The story in this final chapter mainly follows Sarah (Amy Landecker), Josh (Jay Duplass), and Ari (Gaby Hoffmann, whose character Ali came out as non-binary in Season 4 and chose a new name) mourn the loss of their moppa after Davina discovers Maura dead in her bed of ruptured aortic aneurysm. They're left feeling even more adrift when they discover that Maura has left their family home to Davina in her will.

Ulimately, though, the show ends on a positive note for the rest of its characters, showing how the Pfefferman children are in a significantly healthier space than they were when Transparent premiered in 2014. Their mother Shelly even displays some incredible character growth when she realizes she can show her children love in a way that they appreciate.

The finale also introduces Shakina Nayfack's Ava, who fills in for Maura in many ways, playing her in Shelly's play she's writing about her family. It also brings back a series of side characters from the show's run, with Kathryn Hahn's Rabbi Raquel, Trace Lysette's Shea, and Rob Huebel's Len making a comeback. Jenny O'Hara's Bryna, Cherry Jones' Leslie Mackinaw, Melora Hardin's Tammy, Tig Notaro's Barb, and Alia Shawkat's Lila also briefly return, as does John Getz's Donald (Maura's boyfriend at the time of her death), Jerry Adler's Moshe, and Ray Abruzzo's Sal.

The musical aspects don't really add to the emotional depth of Transparent and sometimes distract from the brutal discussions of feelings that the show excelled at depicting. But the Transparent: Musicale Finale gives the Pfefferman family and company the chance to say goodbye to Maura — and fans the confidence to know that these characters will be OK. Here's what happens to everyone in the Transparent finale.

More like this
'The Sandman’s Ending Is A Departure From Neil Gaiman’s Comic Book Series
By Kadin Burnett
Does 'Locke & Key’s Ending Mean There Could Be A Season 4?
By Sophia Moore
Brad Pitt Is A Huge Fan Of This British TV Show
By El Hunt
'Heartstopper's Yasmin Finney Wants To Be The First Trans Bond Girl
By Sam Ramsden
Get Even More From Bustle — Sign Up For The Newsletter