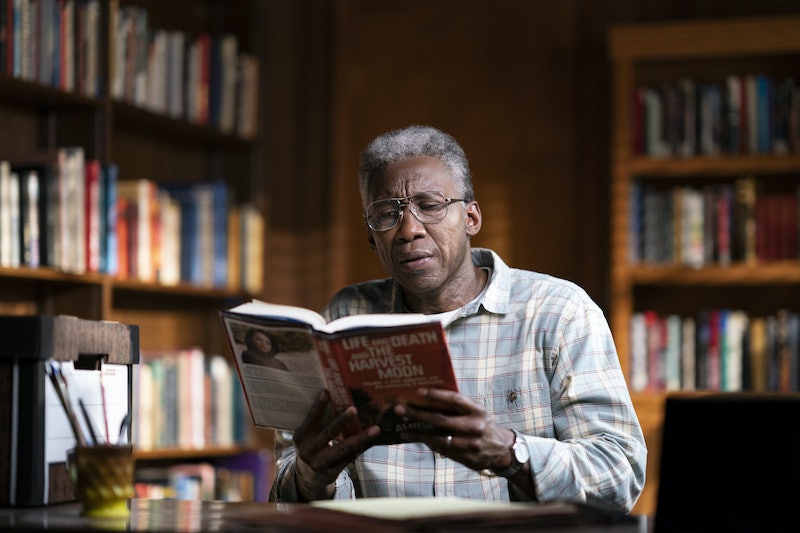 Spoilers ahead for the True Detective Season 3 finale. It's finally the end of the road for long-time partners Wayne Hays (Mahershala Ali) and Roland West (Stephen Dorff) on the True Detective Season 3 finale, which aired Sunday, Feb. 24 on HBO. The partners have been trying to solve the same, frustrating case for the past 35 years, and although viewers learn what happened to Julie Purcell, Hays's deteriorating mental state prevents him from recognizing her, even when the detective is face-to-face with his object of obsession. Like Roland would probably say, "If it was a snake, it woulda bit you."

There were several lingering questions that needed to be answered in Sunday night's finale — like how exactly were the Hoyts involved with Will and Julie's disappearance? Where did Julie end up, and how did she escape from the pink room? And although the hour and 20-minute episode tied up some of these loose ends, its plodding pace made it slow going. Fans certainly had mixed reactions to the finale — many thought it was anticlimactic, while others were satisfied with how this season's mystery concluded. That it aired the same night as the Oscars may mean that many fans will catch up on Monday. But whether audiences were ultimately disappointed, mixed, or jazzed about the Purcell case, here's everything we learned in Episode 8.

Viewers finally learn what happened to poor Will about halfway through Episode 8. In 2015, Hays and Roland finally meet the man with one eye, whose name is Junius Watts (or Mr. June). After working at Hoyt Foods, he began managing the household, which is how he got caught up in the whole kit and caboodle.

Watts explains that Mr. Hoyt’s daughter, Isabel, lost her husband and little girl in a car accident, and was never the same after that. That is, until she spotted Julie Purcell at a company picnic and thought she looked like her late daughter, Mary. Watts was ordered to approach Lucy Purcell, asking if Isabel could play with Julie every once in awhile. Lucy agreed, but only in exchange for payment and if Will went with her. Hence the toys in the woods — that’s where Watts and Isabel would meet with the kids.

Eventually, Isabel wanted to adopt the Purcell's daughter, and one afternoon she and Will got into a tug-of-war match over Julie, causing him to fall and hit his head on a rock. In short, the boy's death was a tragic accident.

Watts arranged Will's body in the nearby cave, and they took Julie back to the Hoyts, where she was kept in the infamous pink room. However, Isabel's mental state was rapidly deteriorating: She had stopped taking her meds, and Watts later learned that she’d been drugging Julie with lithium. As a result, the young girl was dangerously complacent and hardly remembered her former life.

His conscience weighing on him, Watts eventually helped Julie escape when she was a teenager (likely when the Walgreens photo surfaced). And although they were supposed to meet at a second location, he never saw the Purcell girl again. Isabel Hoyt reacted with a fatal overdose, much like Lucy did. The detectives also learn that Julie went to a convent, where she stayed for three and a half years. There, she called herself Mary July and worked through her many lingering issues.

Although Hays and Roland first think Julie died of AIDS back in 1995 (there's a tombstone and everything), viewers eventually learn that she is very much alive. What's more, Julie stayed with Mike Ardoin, as may fans already suspected.

Hays Realizes That Julie Is Still Alive, Then Promptly Forgets

While reading his wife's book, Life and Death and the Harvest Moon, Hays sees a vision of Amelia (Carmen Ejogo), as the detective does at times. She points out that Julie's death might be a coverup to protect the Purcell girl from people who still want to hurt her. The detective then realizes the landscaper whom he and Roland met at the convent is none other than Julie's childhood friend, Mike Ardoin. Although fans had already figured this one out, it takes Hays a bit longer to parse. Furthermore, the two have a child named Lucy, proving that time is indeed a flat circle.

There Are Still Some Loose Ends

Although most plotlines tied up fairly neatly, there are still several things audiences don't learn, like why Roland stayed single, how Amelia died, and who killed Tom Purcell. But at least we can rest assured that everyone's favorite Pumpkin Lady wasn't a culprit, and that those teenage boys just ended up being run-of-the-mill bullies — not child murderers.

It also seems bizarre that Elisa Montgomery would bring up Rust and Marty from Season 1 without there being some sort of pay-off. This particular Chekhov's Gun ended up being a spiral-shaped red herring, and it was disappointing that Matthew McConaughey and Woody Harrelson didn't make a cameo. Even Edward Hoyt's (Michael Rooker) presence was a bit of a let-down — his car ride with Hays ended quickly, with a vague threat that kept the detective quiet for the next 25 years.

The finale certainly wasn't for everyone, and it quite anticlimactic, since devoted fans had already predicted every twist and turn beforehand. That said, some viewers pointed out that Season 3 was more about relationships than the case itself. Indeed, the story revolved more around Hays and Roland's friendship and the detective's marriage with Amelia than any missing girl.

But however you felt about where Hays and Roland ended up, it's depressing that they spent the last three and a half decades obsessing over a single case — especially one that had a fairly straightforward answer. But it's nice to think that, at the very least, Purple Hays and Roland are reunited at last. And maybe now, they'll be able to sit on the front porch, drinking two fingers of Southern Comfort and talking about the good old days.

More like this
This Tiny Clue In 'Wednesday' Foreshadowed That Season Finale Twist
By Grace Wehniainen
This Classic Movie May Be Key To Figuring Out Who Dies On 'The White Lotus'
By Grace Wehniainen
Ava DuVernay Thought The 'Queen Sugar' Series Finale Felt “Really Satisfying”
By Brad Witter
The 'Firefly Lane' Book Ending Teases Way More Tears To Come In 2023
By K.W. Colyard
Get Even More From Bustle — Sign Up For The Newsletter