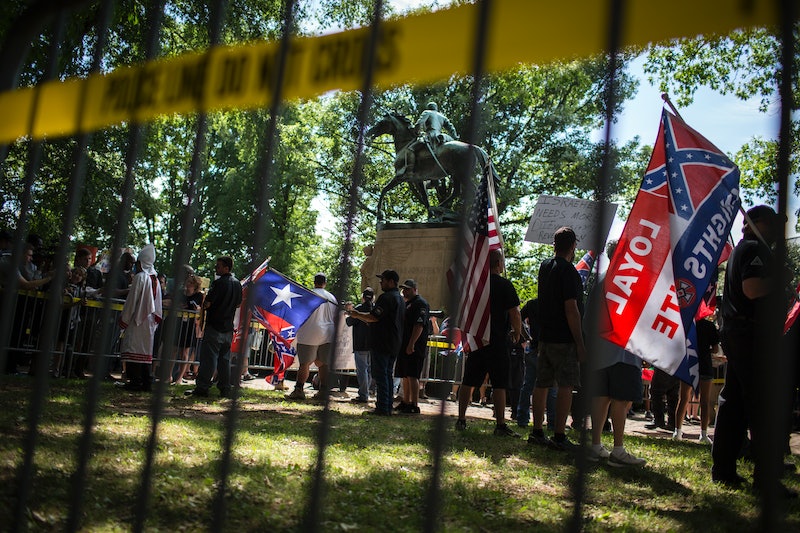 A planned white supremacist march flooded Charlottesville, Virginia on Saturday, after holding a torch-lit pre-rally at the University of Virginia on Friday night. At times like these, when the news is difficult to watch, I find that turning to your heroes can bring a certain sense of comfort. I've got everything your favorite authors have to say about the "Unite the Right" march on Twitter for you to read below.

But first, here's a breakdown of the events in Charlottesville, Virginia. Members of the Ku Klux Klan and various other white supremacist groups planned to march through Charlottesville's Emancipation Park to a statue of Robert E. Lee — which is set to be removed on the basis of a city council vote — as part of Saturday's "Unite the Right" demonstration. Bustle's Natasha Guzman reports:

Following Judge [Glen] Conrad's ruling to allow the demonstration to take place in Emancipation Park, hundreds of torch-carrying white nationalists took to the University of Virginia to prepare for the main event. They chanted phrases like "White lives matter" and "Jew will not replace us" as they marched throughout the school's campus. Some wore clothes quoting Hitler.

The KKK previously marched on the city in July of this year, decrying the removal of the statue. During that rally, the counter-protesters reportedly outnumbered the white-nationalist demonstrators, but that doesn't make the events in Charlottesville — then or now — any less abhorrent.

Here's what your favorite authors have to say about the "Unite the Right" march.