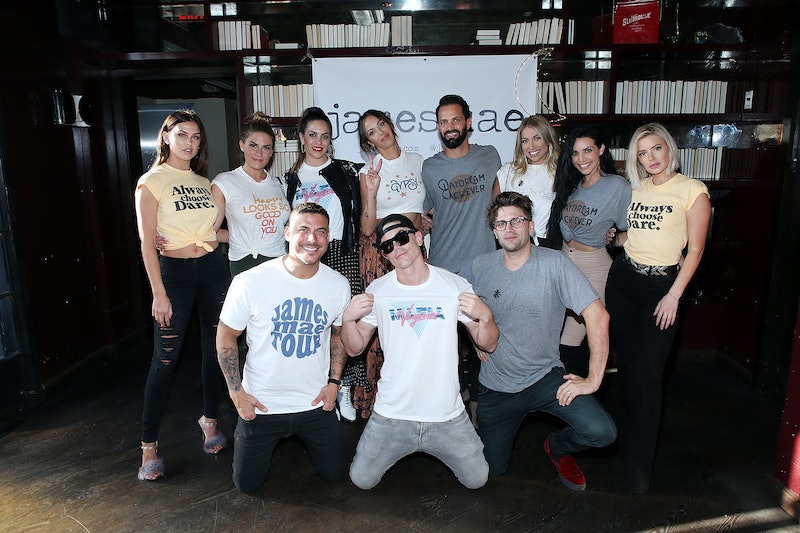 Goat cheese balls roasting on an open fire, Jack Daniel's nipping at your nose. SUR-tide carols being sung by Dena Deadly, and SUR-vers drinking Four Loko. On Sunday night, the Vanderpump Rules cast threw a Christmas party at the Belmont, aka their favorite bar that is not owned by Lisa Vanderpump. They wore Christmas sweaters, knocked back shots, and participated in a white elephant gift exchange. Oh, and a Christmas miracle occurred— er, wait. A Christmas SUR-acle occurred smack dab in the middle of the white elephant exchange, but more on that in a moment.

Pumpers Stassi Schroeder, Jax Taylor, Brittany Cartwright, Katie Maloney, Tom Schwartz, Scheana Marie, Ariana Madix, Tom Sandoval, and Kristen Doute all attended the yuletide get-together. They were joined by supporting Pumpers Peter Madrigal, Beau Clark, Brian Carter, and Rachael O'Brien. Lala Kent missed the event because she's in NYC; James Kennedy apparently is on the outs with several members of the cast, so his absence is not exactly a curveball.

Give thanks, because some of the Pumpers who did go to this Sexy Unique Elephant extravaganza documented the evening on Instagram. Pour yourself a refreshing glass of Four Loko, pull on your most festive sweatshirt, and get ready for some Pump Rules merriment.

Jax & Brittany's Holiday Sweaters Will Be There For You

Wow, they really like that show, don't they? (...Asked the woman who is never not thinking about Pump Rules.)

Jax Had An Important Errand To Run Before The Party

Kristen did not fear the Loko.

Ariana Braced Herself For Impact

Her face says it all.

Are You Ready For A White Elephant Moment For The Ages?

Thanks to Schwartz and this year's white elephant gift exchange, Stassi's current boyfriend now has a sweatshirt with Stassi's ex-boyfriend's face on it. (No, not that ex-boyfriend.)

I repeat: Schwartz made a Jax sweatshirt for the group's white elephant exchange, and Beau unintentionally picked the Jax sweatshirt. If that isn't a Christmas SUR-acle, then what is?

The Man Behind The Gift Reacted Accordingly

Congratulations, Schwartz. You did good work.

But Wait, There Is Another Important White Elephant Gift To Enjoy

And So, Jax Took Matters Into His Own Hands

We should've seen it coming. (If Schwartz puts a photo of Jax clutching Peter's headshot on a sweatshirt and brings it to next year's white elephant, I will chug a can of Four Loko.)

Brittany Showed Off Her Grinch Impression

She is the least grumpy Grinch you've ever seen.

And yes, that is Britney Spears on Ariana's shirt.

A Merry SUR-mas to all, and to all a Four Loko-soaked night.