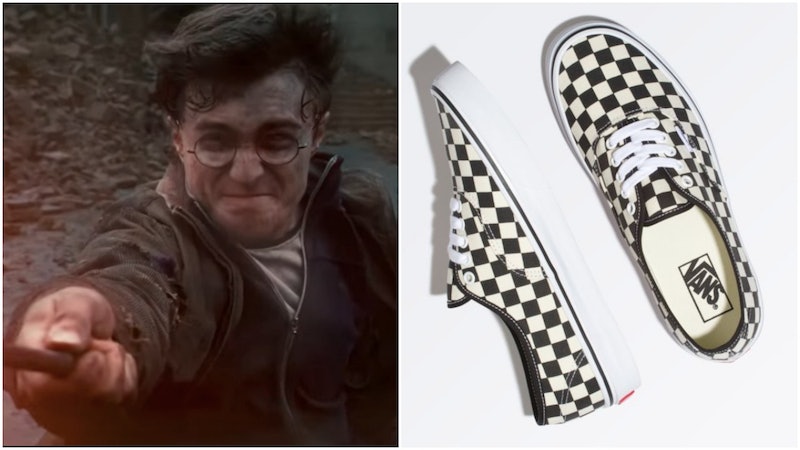 Elder wands and flying chocolate frogs may only be things found in the wizarding world, but Harry Potter fans could swear by their Hogwarts House. Ravenclaws, Gryffindors, Hufflepuffs, and yes, even sly Slytherins may rejoice because the Vans x Harry Potter Collection from Warner Bros. is coming. And fans can “expecto patronum” these shoes to rep every house at Hogwarts seamlessly.

Vans has already collaborated with iconic people in pop culture from Hello Kitty to David Bowie. Now, the streetwear brand has finally unveiled the first look at its collection with Harry Potter. According to a press release, Vans drafted four different designs across the brand’s famed sneaker silhouettes for each house at Hogwarts School of Witchcraft and Wizardry: Sk8-Hi for Gryffindor, an Era for Slytherin, Authentic for Ravenclaw, and the Classic Slip-On for Hufflepuff.

Additionally, Vans plans to accompany the line of Harry Potter-inspired sneakers with women and men’s apparel and accessories to complete the collection.

In April, Vans had teased a post on Instagram with a video, only sharing the brands’ respective logos with the caption “Something magical coming soon.” Vans fans will have to wait a little longer since the brand hasn’t announced a release date or pricing, but Bustle has reached out for comment.

Until then, take a peek at where the biggest of HP lovers can be sorted in this line of magical sneaks.

Regardless of the house each pair of Vans represents, Harry Potter fans might feel the pressure to nab all four just because they're that fab.

Farthest to the left are the pair of Sk8-Hi high tops that honor a Gryffindor's courage. Designed with red and gold stripes on the sides, these babies come with a slight platform sole and a velvet black tongue. Super HP fans will also be pleased to find that the Gryffindor seal is embroidered into the outer sides of the sneakers.

Smart, simple, and sweet like a Ravenclaw is Vans' HP take on the brand's Authentic styled shoe. The Ravenclaw sneakers are designed in the house's color with a checkerboard print. The shoes also feature the house's signature blue hue in the laces, stitching, the outline of the insoles and even on the tongue, where the house emblem is placed.

Hufflepuffs value hard work and loyalty, and their Vans' shoes speak volumes to those traits with their hard leather exterior. Vans' Classic Slip-On is reimagined for Hufflepuffs with a simple and striking contrast using black leather uppers with yellow insoles to rep the house colors accordingly. Plus, the house's mascot, the badger, is outlined on the uppers in yellow, so fans know exactly who these babies are dedicated to.

The final pair of shoes in this collaboration are some of the fiercest in the collection — The Slytherins. The house may be home to "He Who Shall Not Be Named," but the scale-ridden black and green sneakers are too lit to quit. The tongue of these Slytherin Era kicks also feature the house's signature snake emblem.

After seeing this collection in full form, it could convince even the biggest Hogwarts fans to change their house — if they ask the sorting hat nicely like Harry, of course

More like this
Harry Styles’ Red Carpet Looks Have One Thing In Common
By El Hunt
15% Pledge Director LaToya Williams-Belfort On The Impact Of Supporting Black Business
By Dominique Norman
Anne Hathaway Revived 'The Devil Wears Prada' In The Most Andy Sachs Way
By El Hunt
Bella Hadid's Best Runway Looks Of All Time From Paris, Milan, & More
By Allie Fasanella
Get Even More From Bustle — Sign Up For The Newsletter