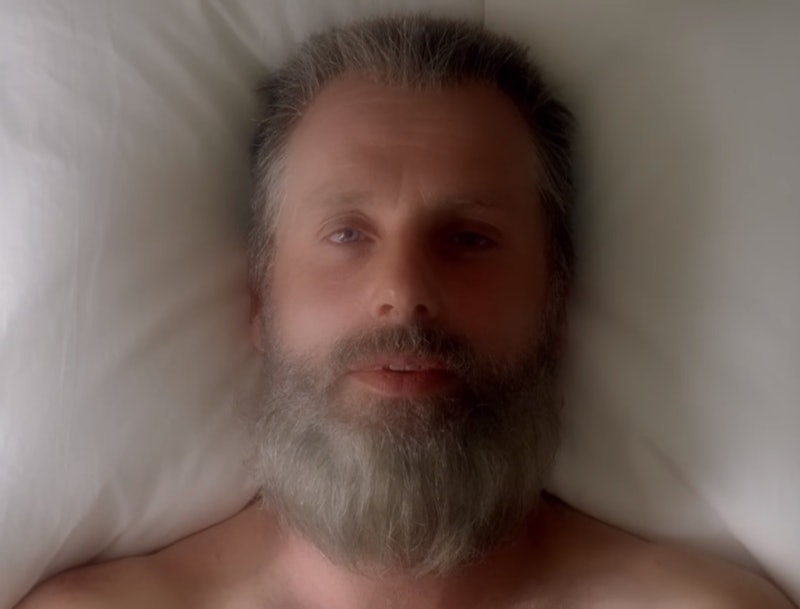 Fans have been buzzing about that crazy ending to The Walking Dead Season 8 trailer since it dropped at Comic-Con. In the final moments of the five-minute look at the upcoming season, Rick is seen sporting a gray beard that would make Hershel envious. The jaw-dropping moment led many to speculate that the season would end with a time-jump, much like the comic book series did at the end of the "All Out War" arc. However, Entertainment Weekly revealed the show will explain what's up with old man Rick in The Walking Dead premiere on October 22. So, if the show is planning to skip a few years into the future after the gang takes down Negan, you won't have to wait long to find out.

The prospect of the scene being a fake-out is still very much on the table. Rick could be dreaming of a future where he lives to be an old man who needs a cane to get around. Given the violent reality he exists in, no one would begrudge him a nice fantasy. It seems more likely that the show is simply showing its hand early to create more interest in Season 9 though. The Walking Dead is due for a reset. Thanks to Negan, the show has reached almost unbearable levels of grimness, and the promise of a bright future — no matter how temporary it may be — would be welcome.

Knowing Rick lives to fight another dead could add a jolt of energy to the show that's in line with the action-packed rebellion going down in the trailer. And if the old man Rick reveal happens in the premiere, the show could tease viewers about the survival of their favorite characters through flashforwards throughout the season.

"One of the things that really keeps 'The Walking Dead' going is that every season feels like a different show. As we start to show more promotional material, and as you guys get to see episodes, you'll see this is another continuation of that, this is a very fresh take on the world of 'The Walking Dead,' and we’re going to be breaking a lot of new ground this season."

A time jump is a quick way to revitalize a show, and to set up new mysteries. For a series like The Walking Dead, there's the added bonus of not having to dwell on the characters' peaceful period, while still allowing them to have one. Rick, Michonne, Daryl, and the rest of the crew deserve to live out a few years of normalcy. Season 8 could tease these happy moments in flashforwards leading up to Season 9, when a proper time-jump could go down. That would mean Season 9 wouldn't have to waste any time in introducing the terrifying Whisperers, and undoing any sense of contentment the characters may achieve.

Whether old man Rick is the real deal or just a sweet dream, at least fans won't have to wait long to see the highly-anticipated twist play out.

More like this
'The Sandman’s Ending Is A Departure From Neil Gaiman’s Comic Book Series
By Kadin Burnett
Does 'Locke & Key’s Ending Mean There Could Be A Season 4?
By Sophia Moore
Everything To Know About 'RHOC' Season 17
By Brad Witter and Sophia Moore
'The Simpsons' Will *Finally* Address How They “Predict The Future”
By Sam Ramsden
Get Even More From Bustle — Sign Up For The Newsletter