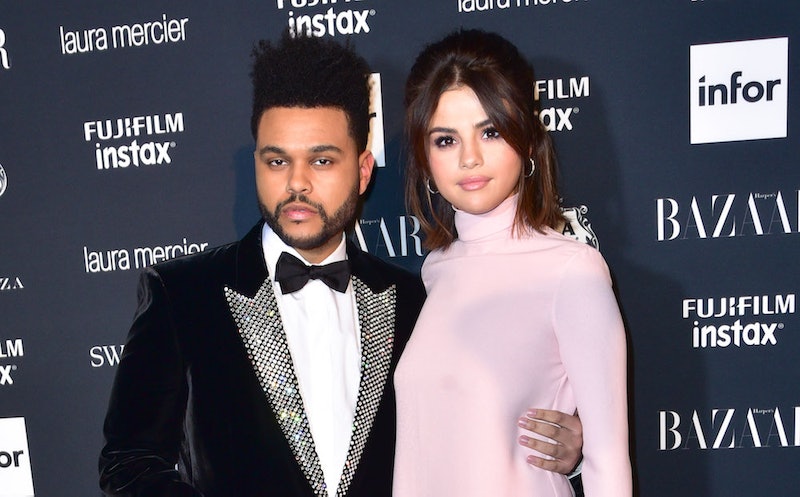 Fans are wasting no time jumping on this news: rumors suggest The Weeknd might have a new song about Selena Gomez. The Weeknd, real name Abel Tesfaye, recently registered a song titled “Like Selena” on the American Society of Composers, Authors, and Publishers (ASCAP) website, E! News reported on Nov. 26. As such, fans are now convinced that the possible new song is about his famous ex.

Bustle has reached out to the Weeknd’s rep for comment about the rumors. The reports come after the musician seemingly teased new music on his Instagram, where he wiped his account clean to accommodate two lone black-and-white photos. In his latest post of a blurred face shared on Nov. 26, he wrote a cryptic caption that read, “TONIGHT WE START A NEW BRAIN MELTING PSYCHOTIC CHAPTER! LET’S GO!”

While “Like Selena” could be in reference to just about any Selena, the Weeknd and Gomez famously dated for 10 months. The couple was first linked in January 2017 but called it quits in October 2017. While they remained tight-lipped about their relationship during their coupling, Gomez and the “Starboy” singer made their official red carpet debut at the Met Gala in May 2017.

If “Like Selena” is, in fact, about the Weeknd’s famous ex, it wouldn’t be the first time the singer has seemed to reference Gomez. Fans have long speculated that lyrics to his 2018 track “Call Out My Name” hint at Gomez’s kidney transplant: “I almost cut a piece of myself for your life, guess I was just another pit stop, ‘til you made up your mind, you just wasted my time.”

The rumors surrounding “Like Selena” come after Gomez’s own return to music. On Nov. 24, she performed at the 2019 American Music Awards in her first televised performance in two years. She kicked off the ceremony with a live performance of her new songs “Lose You to Love Me” and “Look At Her Now,” which hail from her upcoming album after a four-year music hiatus.

In an interview with New Music Daily with Zane Lowe in October, Gomez explained why it took four years for her new album to reach completion. “I learned a lot from the last album and I wanted to take what I’ve learned and turn it into something even better,” she said. “And I’m glad I did because this year everything kind of just started pouring out of me.”

More like this
Selena Gomez Explained Why A Past Album Cover Made Her Feel “Really Ashamed”
By Grace Wehniainen
The Best Memes & Tweets About Lady Gaga Reportedly Joining 'The Joker' Sequel
By Grace Wehniainen
Olivia Rodrigo’s Song Dedication To 5 SCOTUS Justices Sent A Strong Message
By Grace Wehniainen
Will Beyoncé Be At The BET Awards To Perform “Break My Soul” Or Attend The Show?
By Jake Viswanath
Get Even More From Bustle — Sign Up For The Newsletter