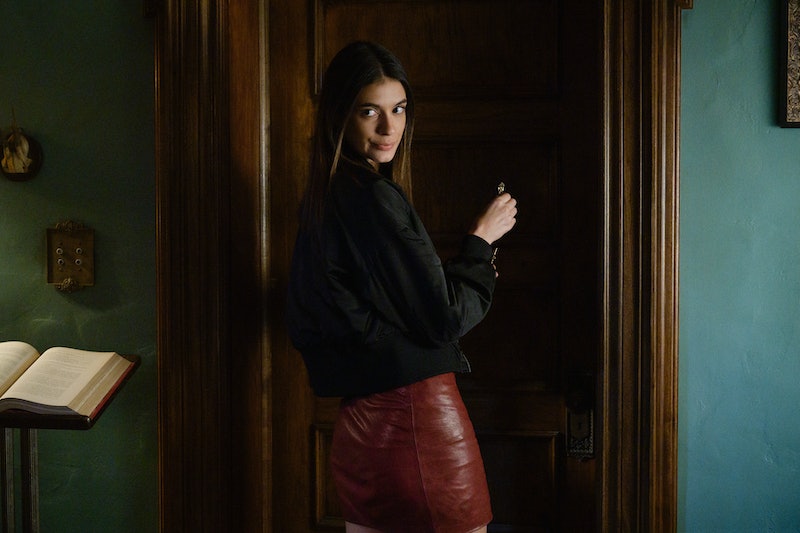 Spoilers ahead for Locke & Key Season 1. Netflix's new dark fantasy show Locke & Key is full of mysteries, the biggest of which is the woman in the well. Dubbed "Well Lady" by Bode, she's an otherworldly demon who is hellbent on getting ahold of the Locke family heirlooms: a series of keys that each have their own magical abilities. Locke & Key's Well Lady is clearly the kids' greatest antagonist, and if the show gets renewed, stopping her will likely be the central aim of Season 2.

Played by relative newcomer Laysla De Oliveira (Into the Tall Grass, The Gifted), Well Lady is the one who originally lures Bode to the well and tells him that his ancestral home of Key House is actually full of magical keys that can whisper to the right person. This puts Bode on a path of discovery, and eventually he finds the Anywhere Key and the Mirror Key, which unlocks the Prison of the Self. Well Lady tricks Bode into thinking the Mirror Key will let him see his dead father, and in return takes his Anywhere Key. It's only then that Bode realizes with horror that she isn't a friendly spirit watching the grounds, but a villain that's been trapped there. Well Lady uses the Anywhere Key to escape, and so begins a game of cat-and-mouse in which the Locke kids try — ultimately in vain — to stop her from getting more keys.

We learn later that Well Lady's name is Dodge, which in itself is also a misnomer. "Dodge" is a nickname that was given to Lucas by Ellie — two of Rendell Locke's friends — because Lucas was good at dodging in hockey. This means that Dodge isn't really a woman played by Laysla De Oliveira, but is in fact Lucas, played by Felix Mallard. Lucas uses the Head Key to transform himself into Dodge (as well as others, we find out right at the end) to trick Bode and the rest of the Locke kids.

There's a giant catch, though: even Lucas isn't really Lucas (whew, this show is a mental maze.) The real Lucas actually died years ago, when Rendell and his friends opened the Black Door. Lucas was possessed by a ball of light that came from the other side of the door, and he ended up killing two of his friends. Rendell was forced to kill Lucas, but years later, a still-heartbroken Ellie uses her Echo Key to try to bring him back to life, not realizing until too late that what comes back is the being that possessed Lucas.

The show doesn't do a great job of solidly confirming this, but what possessed Lucas is a demon whose real name is unknown. (In the comics, Dodge tends to refer to themselves as "The Legion.") It's revealed in the Locke & Key: Clockworks comics that the Black Door is a gateway to another world, where demons called Children of Leng reside. Children of Leng require a human host to survive once they cross the threshold, or else they drop dead and become Whispering Iron — the material used to make the magical keys, which indeed "whisper" to the right people.

Why Dodge wants the keys goes unexplained by the show. Do they want to get revenge on the Lockes for turning their fellow demons into keys? Do they want to open the Black Door again and let more Children of Leng out? If that's the case, what's the end goal?

Locke & Key will have plenty to answer for if it gets renewed for a Season 2, but one thing's for sure: Dodge has proven that they're much smarter and more resourceful than Ellie, the Lockes, and pretty much everyone else they come into contact with. The protagonists really need to figure out how to come together and wield what few keys they have — or ideally find more, as there are in the comics — or else Season 2 might seal their fate once and for all.