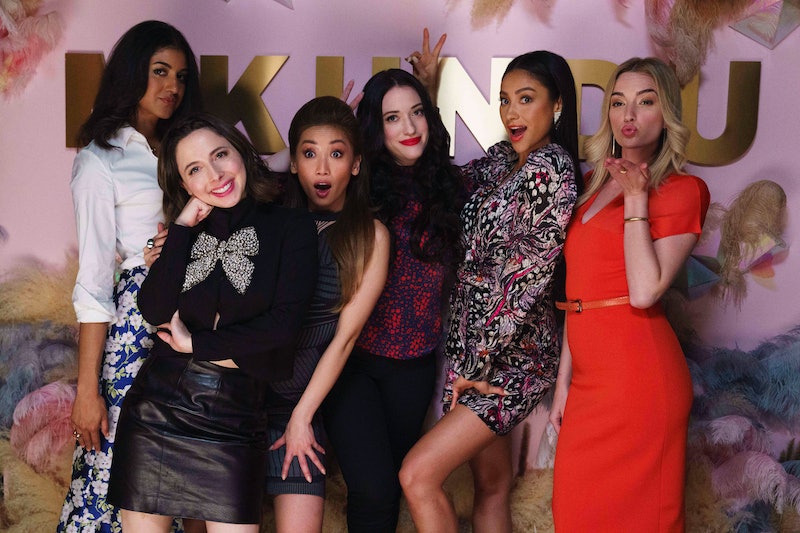 Hulu's dramedy Dollface is about a woman learning how to reconnect with other women after her all-consuming, five-year relationship suddenly ends. While Dollface explores feminist issues such as sisterhood and sexual freedom, it isn't until Episode 9 that feminism as a concept is tackled directly. Literally entitled "Feminist," the episode attempts to explain what feminism is, but stumbles on the delivery. The episode speaks to how feminism in Dollface is treated as a whole: what should be complex and uplifting is flattened down into an easily packaged message about girl power.

Dollface uses short bursts of magical realism to illustrate whenever lead character Jules (Kat Dennings) is learning a new aspect of sisterhood, and Episode 9 marks the first time the fantasy sequence takes over the whole episode. In it Jules becomes Dorothy in The Wizard of Oz, and she's caught in quite a storm: her best friend Madison (Brenda Song) is sleeping with the husband of her boss Celeste (Malin Åkerman), and now Celeste knows something is up because she found Madison's heels at their bedside.

Jules, who's still figuring out how to navigate women-dominated spaces (as she abandoned them all in favor of her boyfriend), doesn't know what to do in this situation. Does she give up Madison to save her job, or does she stay loyal to her friend even when Celeste clearly suspects Jules knows the truth?

"This is about loyalty in the greater sense. Loyalty to the code that we as women must follow in order to stick together and not let men come between us," Celeste tells Jules, the Wicked Witch in this vision. "This is about being a feminist. Do you think you're a feminist, Jules?"

"Yeah I think I do my best," Jules laughs uncomfortably. "I think I'm feminish."

Jules then runs off to be with her friends Madison, Stella (Shay Mitchell), and Izzy (Esther Povitsky) at the Women's March, but the question eats at her. "Being a feminist means I'm supposed to be supportive of all women, but there's no way to do that when supporting one means hurting another," Jules complains to Cat Lady, a fantastical creature she conjures up when she's stressed. Cat Lady tells Jules and her friends to go listen to Silvia Goldman, "the biggest feminist icon of the last 50 years," to get the definitive answer on what it means to be a good feminist.

They find Silvia, and the first thing she does is toss off her fake eyelashes and her push-up bra inserts, to the shock of the young women. ("Why do you care what you look like? Aren't you some brilliant feminist?" they say.) Silvia asks what guidance they need, so they all list off what they think a feminist is supposed to be: supportive of all women, valued for her brain and not her looks, above feeling heartbroken over a guy, and strong enough to get by on her own.

"I'm going to stop you right there with your 'supposed tos,'" Silvia tells them. "I'm sorry to disappoint you if you were expecting some magic answer from me, but I'm just a woman, and feminist is just word. It doesn't have just one neat definition like that."

"So that's it?" they ask. She nods and hands them some cute buttons that speak to each of their Wizard of Oz characters: Big Girls Do Cry! Beauty and Brains! I Am Woman Hear Me Roar! Jules confronts Celeste, where they both agree that this petty fight is ridiculous, and the true bad guy is Celeste's husband.

It's a happy ending for Jules, but the episode does little to explain to an uneducated viewer what feminism actually means; in fact, it purposely avoids answering the question entirely, and ends up, in essence, feminish. Feminism does have "one neat definition": it's the belief that women should have equal rights and opportunities. Many people still see gender equality and feminism as totally separate ideas, so the fact that the women-written and produced Dollface avoids clarifying anything and ultimately opts for very basic girl power imagery is unfortunate and disappointing.

This also applies to the portrayals of Madison and Stella, women of color who never encounter any race-specific issues compared to the white Jules and Izzy. They are all effortlessly rich, conventionally attractive, able-bodied, straight, and glamorous women, even when they're meant to look disheveled and sad, and the tidy and beautiful LA they live in reflects that.

The show also never gets close to really confronting why Jules never connected with any women for five years: is it internalized sexism, or is she really one of those cool girls? Both are worth exploring, but Dollface seems almost afraid of calling out Jules and the rest of the girls and have them exist as messy, gray characters. As a result, all the characterizations are flatter than they could be, and we miss out on moments of genuine connection.

Jules does come close to realizing what real, intersectional feminism is supposed be in Episode 9 when she says you can't support all women without hurting others. And she's right! Defending conservative women like Tomi Lahren or Megyn Kelly, for example, would mean indirectly hurting the immigrant women they lambast. But Jules' entire realization is hinged on a very personal situation, and once Jules and Celeste make up, that statement is forgotten, when it should've been weaved into Jules' entire journey of realizing what sisterhood means.

Dollface is ultimately a sweet and optimistic comedy, but if it's saddled by expectations to dive deep into the meaning of feminism, it's because of the precedent set by Hulu's other women-centric comedies. Both Shrill and PEN15 found ways to explore issues of race, white privilege, sexual orientation, and body image all while being hilarious tales about young women finding themselves. The more we continue to treat feminism as this big scary thing that needs to be broken down into cutesy feminish catchphrases, the more we avoid having honest conversations about what equality really means.