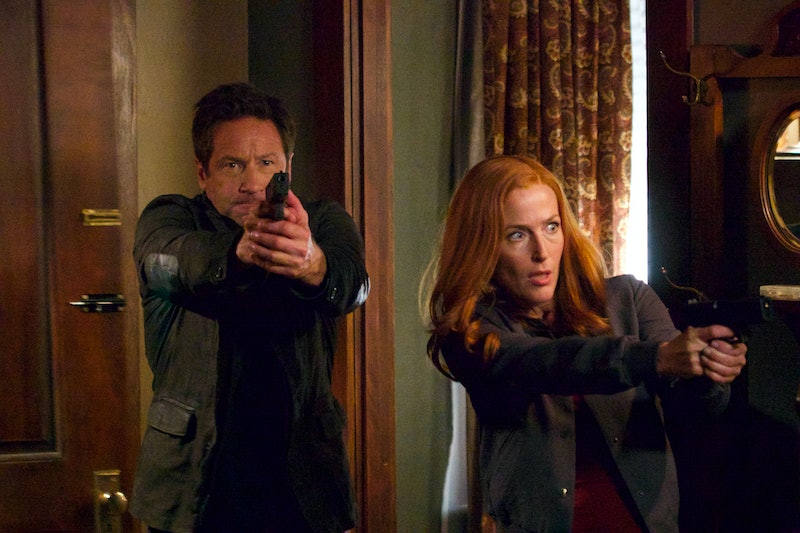 What's the recipe for a good episode of The X-Files? That classic Mulder/Scully banter is always crucial, of course; but are the best episodes the mythology hours, or the monster-of-the-week stories? According to the cast and crew, the X-Files Season 11 mythology episodes will strike a good balance with its standalone entries, hopefully capturing that blend of styles that made the sci-fi series so successful in the first place, and that so many other shows since (like Fringe or Lost) have tried to capture.

"There's a great mix, as there always is, of the mythology and monster-of-the-week," cast member Mitch Pileggi says, speaking with Bustle and other press at New York Comic-Con last October. "I think it strikes a really good balance between all of the elements that the fans have come to want and expect," star Gillian Anderson agrees. "I think we give them a little bit of everything. There's certainly more monster-of-the-week type episodes, and some of those are serious and some of those are more comedic, depending on who is writing them." So far, confirmed writers for Season 11 include series creator Chris Carter, X-Files vets Darin Morgan, Glen Morgan, and James Wong, and newcomer Kevin Hooks (Prison Break).

The reason Anderson says that there are "certainly" more monster-of-the-week episodes in Season 11 is because there are simply more episodes in total this year. While 2016's revival only contained a brief six episodes — four monster-of-the-week hours sandwiched between two mythology bookends — 2018's continuation will boast a more robust 10 episodes. And while it's unclear how many of those will be entries in the show's ongoing serialized mythology (presumably at least the premiere and finale), that leaves room for as many as eight standalone stories; more than all of Season 10 put together!

While over a decade had passed between Seasons 9 and 10, Season 11 will be picking up only two years since the last episode, allowing the show to dive full steam ahead into the action rather than playing catch-up. "It's a little more pressure off," Carter admits, "because I feel like we just did it and we're coming back and doing some more — rather than 12 years have elapsed and you're all getting back together trying to figure out how to do it. As I say, we went from a standing start last time. We're in the race now, and there's a difference."

Co-star David Duchovny agrees. "What's nice about this season is that we're doing 10 rather than six," he says. "Of the those six the first two were really exposition-heavy about how to get you up to speed, introduce the characters to new people, satisfy old [fans]. The sixth one was also wrapping up old stuff, so you only got three episodes in the middle to kind of do what you do. Now we've got more like nine episodes where we can actually stretch out and be a [real] season of our show."

However much time Season 11 does end up devoting to the show's mythology, Carter cautions fans that it might make some unexpected twists and turns. "We've added some elements. We've added some popcorn to it," the creator teased to Entertainment Weekly. "We're taking the show's mythology to a new place, which we needed to do." Asked how he plans to end the season, given news of Anderson's departure from the X-Files franchise, Carter similarly warns viewers to be on their toes. "Things are often sacrificed in [a season] finale," he told EW. "There's a vertical corner in the finale that I think will get people's attention."

Is Scully going to sacrifice herself to save Mulder in Season 11's final episode? The truth is out there; fans will just have to wait 10 weeks to learn it for themselves.