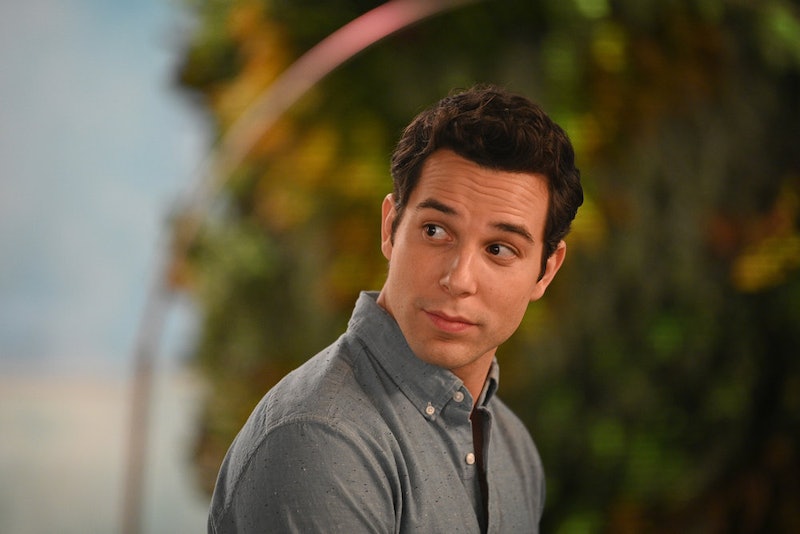 In the upcoming Season 1 finale of Zoey's Extraordinary Playlist, many of the show's characters will find themselves at an emotional crossroads. Zoey is struggling to accept the fact that her father is dying, while Max is left reeling after being fired from his job at SPRQPoint. It's a feeling of uncertainty the two will need each other more than ever to get through. "To recover from that, [Max is] going to need Zoey," Zoey's Extraordinary Playlist star Skylar Astin tells Bustle. "[They're both] going to have to ask themselves the hard questions."

Still, the finale won't be all hard questions. Part of the charm of Zoey's is in the way that it delicately balances feelings of sadness and joy — and there will be plenty of the latter, too. Astin teases that the finale's centerpiece will be an epic, seven-minute-long musical sequence shot in one take. "On the day [of filming], I just had that feeling of opening night, where you're totally prepared and ready to make it your own," Astin remembers. "It felt like every take was two minutes long. There was something about how much it moved that I was like, 'Wait, it's over already?'"

After shooting the sequence five times, the cast and crew gathered at the monitors to watch what they'd filmed. "We were all crying just because it's so moving, it's so wonderful to see us all working together," he says. "Our director said, 'We did something very special today, and we're gonna touch people's hearts.' I think people will be talking about it."

Another part of Zoey's charm is the ever-shifting love triangle between Zoey, Max, and their co-worker Simon. The fandom is firmly divided between Team Max and Team Simon, but Astin doesn't see it that way. "I can call it a love triangle, because that's the term, but it's really a love thread in this story about a woman who has this ability and who's losing her father."

If forced to choose sides, Astin unsurprisingly says that he's Team Max, but that he doesn't mind if half of the show's fans are rooting against his character. "I want people to want Simon and Zoey together just as much as I want them to want Max and Zoey together — and I think that's where we're succeeding." Still, he says it's important that they "never make [Zoey] feel like a prize. She's nobody's to win, she's her own person, and [Max and Simon] are [their] own individuals as well."

Should Zoey's be renewed for Season 2, Astin already knows what's next for Max, Zoey, Simon, and the rest of the cast. "[Creator Austin Winsberg] and I have been having some conversations," he teases. "I happen to know what's going on in that little genius brain of his, and I really like the road that we're paving together. I will not say anything else."