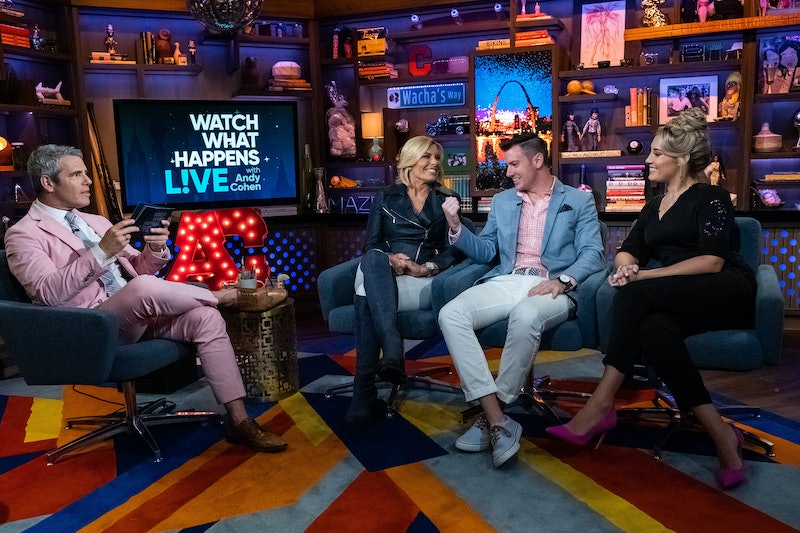 With all of the cast changes and drama during Season 4 of Below Deck Mediterranean, there is more than enough to talk about at a reunion hosted by Andy Cohen. But for some reason, there won't be a Below Deck Med Season 4 reunion at all, which is a major bummer. On September 3, Decider broke the news that "inside sources" claimed there would not be a Season 4 reunion. Sadly, Captain Sandy Yawn confirmed the report the next day in response to a tweet from Decider. Bravo did not immediately return Bustle's request for comment about the reunion.

Captain Sandy tweeted, "Sad, but true. You can always catch up with our thoughts on this season on @BravoTV After Show. Thanks to all the fans & friends of #BelowDeckMed for your support & love thru all our seasons!" To make matters worse, she did not share why there wouldn't be a reunion, and fans are really confused about it.

Twitter users tried to ask Andy Cohen to explain the programming choice, but all he said was, "Not my decision!" It really isn't — while Cohen is an executive producer on the Real Housewives shows, he is just the host for other reunion shows on the Bravo network.

At this point, fans have become accustomed to watching the Below Deck Med cast members gather post-filming to share updates on their lives, rehash the season's drama, and sometimes, find some resolution for lingering issues. That's why it's not at-all-surprising that so many viewers tweeted disappointed reactions to the Season 4 reunion news.

It's unclear if fans will ever get an explanation about the lack of reunion, but there are other ways to catch up with the cast even when the season is done. Aside from Jack Stirrup, all of the Below Deck Med cast members are on Instagram and have Twitter accounts. Aside from social media, there is a Below Deck Mediterranean After Show on the Bravo website, where each week, cast members discussed the latest episode and shared BTS gossip. So if you missed that the first time around, it's definitely worth checking out to see if any of your lingering questions have already been answered.

Additionally, Season 4 stews Anastasia Surmava and Aesha Scott will be guests on Watch What Happens Live With Andy Cohen on Sept. 30 at 11 p.m. ET. Fans will have the opportunity to submit questions via social media and call in to talk with the ladies one-on-one. Maybe someone will ask for a reason why there's no Below Deck Med Season 4 reunion.

Below Deck Mediterranean Season 4 concludes on Sept. 30 at 9 p.m. ET on Bravo, but at least the original Below Deck will be back for Season 7 on Oct. 7. That won't provide the same closure that a reunion episode would, but any Below Deck content is always a good thing.