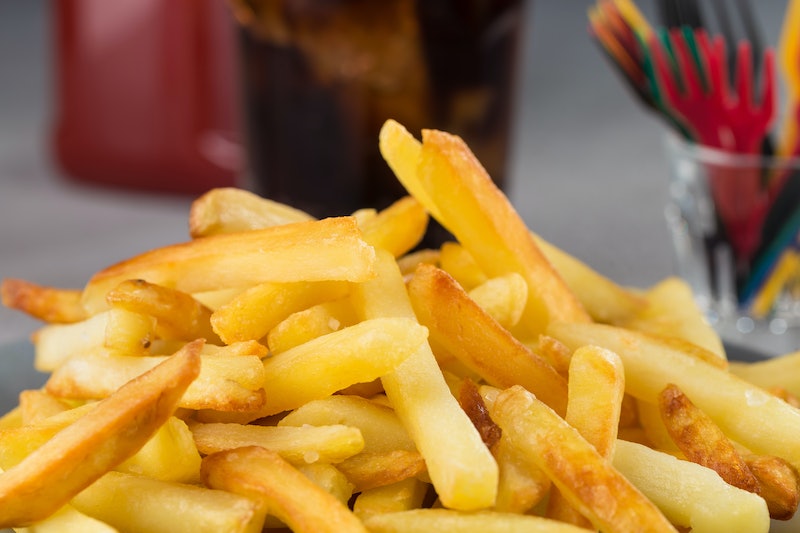 If food festivals, unlimited fried potatoes, and starch-based puns are what you crave, I have just the thing for you. Introducing Frye Fest, a food festival all about french fries. It’s a self-described “immersive fried potato festival” that takes place in Tallahassee, and wow, can you believe it, heaven is located in Florida.

Taking place in a “not so secluded area of Tallahassee,” French Frye Fest touts a french fry experience like no other. The menu includes four different types of french fries from three different restaurants for a grand total of 12 uniquely crafted french fry dishes. Each of the three restaurants will specialize in a different type of fry: straight, curly, or waffle. (#JusticeForCrinkleCut)

If you’re free Saturday, July 13 between 6 p.m. and 10 p.m., you should probably make your way to Tallahassee. Advanced passes for the festival cost $20 and include unlimited french fry sampling. I’ll say that once more with feeling: A crisp Tubman will get you ALL THE FRENCH FRIES YOU CAN EAT in one evening. I think I need to lie down.

For an extra five bucks, your unlimited fries will include a t-shirt. Tickets will also be available day-of for $25 sans themed t-shirt.

Food pun festivals are precisely what this country needs right now. Give us Cocoachella. Give us Cinnabonnaroo. Give us Wrapped Tour, a tour de sandwich wraps. I mean, Lollipopalooza practically plans itself.

Taking part in the second annual French Frye Fest are local Tallahassee restaurants Madison Social, Centrale, and Township. If you weren’t already enticed by the promise of ~*UNLIMITED FRENCH FRIES*~ perhaps the festival menu will.

One of Township’s four french fry dishes will be Spiral Okra, curly-cut okra fries served with a house russian dressing drizzle. Centrale will be offering Rosé Ranch Fries, straight-cut fries drizzled with a house made Rosé ranch sauce. Yes, I did just say “rosé,” “ranch,” and “french fries” all in the same sentence. It’s like the internet came to life, went to culinary school, and said, “lol jk I’m just gonna put some wine and ranch on fries and call it good.”

And for dessert? Madison Social’s S’mores fries: waffle fries drizzled with chocolate, sprinkled with graham crackers and topped with marshmallows. Fries for dinner! Fries for dessert! Fries for everyone all the time!!!

If your french fry palate isn’t as adventurous, you’ll have plenty of less exotic fry options to choose from like Garlic Parm curly fries tossed in a roasted garlic oil topped with shaved parmesan and Poutine, Canada’s gravy, cheese curds, and french fry gift to the world.

So, how exactly does a french fry, excuse me, french frye festival come to be? “[L]ast year we were looking at the calendar and saw that National French Fry day (July 13) fell on a Friday,” a representative for Frye Fest told Bustle via email, “so [we] decided to do a fun event around fries.” Perfect. Delicious. Five star-shaped french fries. After the success of the first festival and the less-than-successful Fyre Festival, a potato-shaped light bulb went off.

Fyre Fest, if you aren’t familiar, was the self-proclaimed “luxury music festival” co-signed by Ja Rule in 2017. It had beautiful beaches. It had A-List celebrity performers. It had Hadids and Baldwins and Jenners. At least according to the promo video. In reality, the festival was a bust at best and a health and safety hazard at worst. The subsequent Hulu and Netflix documentaries showed pretty damning conditions for both festival goers and the Bahamian people tasked with putting together the festival. In 2018, the 27-year-old Fyre Fest co-founder Billy McFarland was sentenced to six years in prison for wire fraud and other charges related to the festival.

The French Frye Fest, on the other hand, will be notably less salacious.

As an homage to everyone’s favorite Schadenfreude-laden festive, Frye Fest was born. “We reached out to some of our followers who have a lot of followers themselves and had them drop the graphic yesterday to sort of mimic all the influencers,” a spokesperson for Frye Fest told Bustle. “The event description was an obvious parody from the actual Fyre Fest promo video.”

The description for Frye Fest claims it was “once owned by Kendall Jenner (totally not true, just making that up),” a clear allusion to Fyre Fest’s claim that their event would take place on an island once owned by Pablo Escobar.

Whether or not Kendall Jenner will show up, is still in the air. (The likelihood she shows up is about as high as the likelihood Kanye was actually ever going to perform at Fyre Fest.) However, Eric Pounders of Madison Social they’ll have something on the menu she’d enjoy, should she stop by. “I feel like she'd be all about the Rosé ranch or the Black and Peru,” Pounder said via email. “That peruvian sauce is something magical. People have asked us to bottle it up and sell it on many occasions.”

You'll just have to taste the magic for yourself come July 13.

More like this
You Can Stay At The 'Hocus Pocus' House On Airbnb
By Alexis Morillo
Craving The Beach? Here's Your Guide To A Solo Vacation In Turks & Caicos
By Alexis Morillo
5 Ways To Help People Impacted By Hurricane Ian In Cuba & Florida
By Emma Carey
TikTok's Butter Board Might Be The New Cheese Plate
By Emma Carey
Get Even More From Bustle — Sign Up For The Newsletter