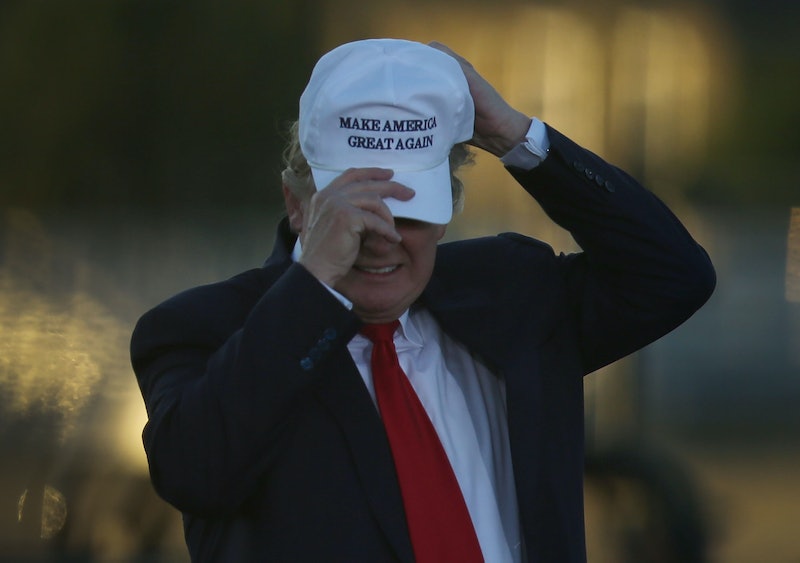 It might feel like Americans can't go anywhere without encountering President Donald Trump — and that could soon include trips to the mailbox. The latest small-step, giant-leap for Total Trump Saturation comes in the form of the "Big League Box," a monthly subscription box full of Trump merchandise.

In addition to confirming that Trump has been saying "big league" and not bigly this whole time, this monthly merchandise-dump is sort of like Birchbox for your xenophobic, baseball hat-wearing uncle who contributes to an at-best controversial/at-worst authoritarian political ideology. As noted in an email posted by Dave Levinthal of the Center for Public Integrity on Twitter, Trumpsters can access "a handpicked bundle of exclusive and vintage official Donald J. Trump merchandise delivered to [their] door every month as a recurring donor."

All this can be yours for the price of $69 (I know: nice, but mostly yikes) donated each month to the 2020 Trump campaign.

Not unlike Trump himself, subscription box services have gone through the "have we reached saturation?" ringer themselves. Since the rise of subscription boxes, economic and marketing experts have been wondering whether it's all a little Too Much™.

Data compiled by Shorr packaging in 2016 shows that subscription box business, particularly for beauty, apparel, and athletic brands, is still booming—with visits to the leading services' sites increasing by 3,000 percent over the last three years. The top sites also saw 8.6 million Americans visiting during the 2015 holiday season. So Trump's team hopping on this train isn't nearly as bizarre as it might seem at first glance.

Shorr's data also says the median age of a typical subscription box customer is around 41 years old, has a median income of $78,436, and 58 percent of them are women. Lined up with what we know about Trump voters, that might mean that this sort of product — considered aspirational, status-oriented for brands — could still have an appeal among supporters who can afford dropping that $69 each month.

Meanwhile, those who feel a jolt to their gag reflex with all this talk of MAGA merch can shuffle their Tubmans and Sacagaweas over to any of their favorite resistance-themed charities (or even an activism-themed subscription box). Just sayin'.